Risk parity in 2017: What a difference a year makes

Risk parity strategies have posted good results in 2017. What next?

In late 2016, risk parity was the poster child for all that ailed financial markets. Critiques rested mainly on the allegation that risk parity strategies, being systematically managed to maintain a constant balance between four asset buckets, were the primary culprit behind sudden selloffs, amplifying downside market volatility as they complied with rules requiring that risk parity managers adjust positions in bonds, commodities and equities, whether via futures or underlying cash markets.

Risk parity has turned in a solid performance since then, and the investing approach itself has won more adherents across the institutional marketplace, perhaps best exemplified by the introduction in August of a family of indices based on the three volatility levels that current risk parity providers most commonly target (see page 6). The indices, designed and managed by Hedge Fund Research – with significant input from consultants, managers and investors involved with risk parity – promise to increase understanding of how risk parity is being implemented and the results being generated by various approaches to the concept.

“Risk parity has done quite well this year,” says Eddie Qian, chief investment officer and head of multi-asset research at PanAgora Asset Management in Boston. Late in 2016, says the inventor of the term, market expectations called for rising inflation and rapid growth. “People had doomsday scenarios for risk parity,” says Qian. But inflation has mostly remained below the Federal Reserve’s target during 2017. “Again, the fear has not been supported by reality. It’s been a positive surprise for risk parity managers and clients.” 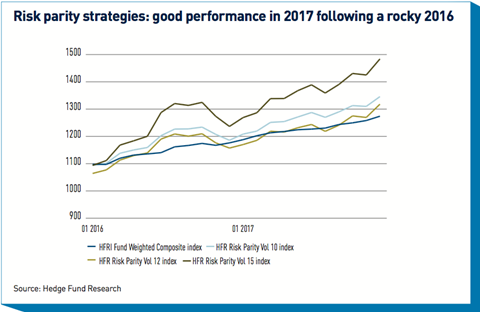 The new HFR risk parity indexes tell the story. For the institutional subset of funds with $500m (€419m) or more in risk parity capital, the index of those targeting a 10% volatility level returned 6.6% through July 2017, the 12% target returned 7.4%, and the 15% target returned 9.5%. Risk parity strategies have outperformed a broad sample of hedge funds in both up and down markets over the past five years. 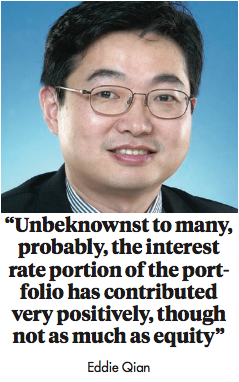 The positive outcomes stem from the performance of the underlying assets that comprise risk parity portfolios, which allocate funds equally between equities, bonds, commodities and inflation-linked assets, based on the risk of those assets in terms of volatility.

This year, risk parity is firing on all cylinders – three of them. “In our view, risk parity should embrace three kinds of risk premiums, equity, interest rate and inflation-related,” says Qian. “If you look at the three pistons, obviously the equity risk premium has done quite well, from 15% to 20% year to date,” he adds. “So that part of the portfolio has contributed significantly to the return.”

The bond contribution has been less obvious. “Unbeknownst to many, probably, the interest rate portion of the portfolio has also contributed very positively, though not as much as equity,” says Qian. The stealth story is because “if you look at US rates, the long end has been stable even though the Fed has raised rates a few times on the short end,” he adds.  “The current talk in the market place is about how the curve, the difference between the long yield and short rate, has flattened because the long end has not risen as much, and sometimes declined a bit,” Qian explains. “So US Treasuries, or international government bonds or credit have contributed positively to the returns.”

With two out of three positive, Qian turns to commodities. After struggling early in 2016, commodities turned positive and sustained performance through this year. “So all three pistons are on the upswing,” Qian says.

The introduction of indices that institutions can use to evaluate risk parity strategies reflects a broader trend towards multi-asset investing. For the past 35 years, a ‘set and forget’ strategic asset allocation has been the reference point for institutional investors. A typical 60/40 mix of equities and bonds had approximately the same volatility as a portfolio holding only bonds, but with a better return. That approach “is not likely to be as fruitful moving forward,” according to a recent paper on multi-asset strategies from the Columbia Threadneedle Asia Quarterly Bulletin.

Holistic view
With investors no longer able to rely on the traditional strategic asset allocation mix, “the dynamic asset allocation that drives multi-asset strategies is likely to be a more beneficial approach,” writes Columbia Threadneedle. Multi-asset strategies will need to look beyond equities and bonds as the drivers of risk-adjusted returns at a palatable level of volatility, and seek a different asset mix. While the firm takes an active unconstrained approach seeking to generate performance in line with the real return of equities with up to two-thirds the volatility, for many pension investors, the more clearly defined parameters of risk parity strategies offer a sufficient dose of multi-asset exposure.

“Our view on using risk parity in portfolios with our clients is to think about the portfolio as a whole in relation to their reference portfolio for growth assets,” says James Price, senior investment consultant in the manager research team at consultancy Willis Towers Watson.

Many of the building blocks of risk parity products are strategies that an institutional investor could access directly on their own, but for various reasons may not wish to do so. “Having those allocations wrapped in a fund is a useful governance solution,” says Price. “If you’re going to pursue a risk parity approach to building a portfolio, then there’s obviously ongoing rebalancing and so forth that is required to maintain that,” he says. “Having that outsourcing relationship with an asset manager makes a lot of sense for a number of clients.”

A crucial precondition is that clients understand the risk parity approach before committing. “For us, it’s very important that a client investing in these products really buys into the concept of building a portfolio and allocating the assets through the risk lens,” says Price. Risk parity strategies, with exposure to commodities and inflation-linked securities, “do perform differently to a 60/40 equity-bond portfolio,” he adds. “We want clients to have bought into that idea and think that this is a good way of building a portfolio, perhaps including it alongside a more traditional growth fund or real return fund as a way of combining multi-asset class portfolios. You have to understand what’s going on under the hood.”

Questions of leverage
One of the main things going on under the hood of risk parity vehicles is leverage. With interest rates starting to rise after a 35-year period of declining rates, concerns have arisen that higher rates might sharply depress risk parity portfolios. Risk parity funds hold large bond positions, and in order to boost total returns after the trimming of equity positions that risk parity entails, risk parity funds borrow so they can buy larger bond holdings. Both factors could expose risk parity funds to losses as rates rise, but there’s more to the story. “We believe the concern around exposure to bonds and rising rates is more nuanced,” says Price. “It’s not rates rising, per se, but rates rising faster than is priced into the market already that could be challenging for risk parity,” he adds.

While leverage is an essential part of the risk parity approach, assessments of the benefits and dangers of leverage – and thus the utility of risk parity itself – are often subject to muddled thinking. In the view of AQR founder Cliff Asness, the role of leverage in risk parity is “often misunderstood”. In a seminal research note entitled Risk Parity: Why We Lever, Asness returns to first principles to clarify how and why leverage is used in constructing risk parity portfolios, and reminds investors of the choices they are making by using market-cap weightings to construct traditional portfolios. 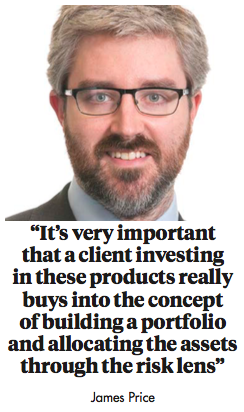 If a portfolio’s expected return is too low after an investor makes best efforts to balance risk across assets classes, Asness contends, leverage should be applied to this ‘best’ portfolio, rather than increasing the allocation to higher-return assets, which would concentrate the portfolio into risky assets. “This is not some newfangled idea,” writes Asness. “Rather, it’s among the earliest and most established ideas in finance.” Basic theory, he argues, favours retaining the portfolio with the best risk profile. This portfolio “tends to differ systematically from traditional portfolios”, primarily by holding higher weightings in lower-risk assets like bonds, and better diversifiers like commodities, which may be risky viewed in isolation but don’t add as much risk in a portfolio context.

But investors tend to fear leverage, which ironically, Asness believes, gives rise to much of risk parity’s benefit. “Putting it starkly,” he writes, investors have two choices to increase returns and both are forms of risk: adding leverage or increasing concentration. “We simply believe,” he writes, “in moderation, leverage is a better risk to take in pursuit of higher returns than is the risk of concentration,” which can occur “perhaps without consciously choosing to do so”. A major reason for that choice is that while leverage is not riskless, “we believe leverage is more manageable than concentration”, for example by monitoring the liquidity of assets and the stability of leverage financing sources, and by adjusting leverage as market risk, however an investor measures it, increases or decreases.  To Asness, leverage offers another advantage: “you get rewarded for it with a higher expected return,” while the path of increased equity weight brings peril. “There is little you can do to manage concentration risk save pray it doesn’t kill you.”

In the current market, concerns persist that bond-laden risk parity portfolios could drop sharply if interest rates rise. But historically low levels of interest rates and volatility affect all portfolios, not only risk parity strategies. The main question facing investors, then, remains the same, according to Qian: how do you achieve diversification? A portfolio that will perform well in the face of changing economic conditions or policy changes will be one comprised of components that provide offsetting reactions to market circumstances, and for that, says Qian, “I don’t see anything better than risk parity.”