As a raft of financial directives continue to flow from the EU, Charlotte Moore finds two are raising the most concerns among pension schemes, in particular the revised IORP II

It is challenging to keep abreast of the plethora of new financial directives emerging from the EU. While banks will bear the brunt of most of this new regulation, pension funds are not immune. Some rules are aimed specifically at the sector but the industry will also be affected by broader regulatory change.

• The revised EU directive on occupational retirement provision should be passed early next year.
• The part of the directive aimed at improving scheme governance looks more closely at the risk-assessment of schemes along with the qualifications of trustees and providers.
• New regulations will be introduced in 2016 on the mandatory clearing of derivatives and how to make uncleared derivatives safer.
• Whether a pension scheme uses a cleared or uncleared derivative, these regulatory requirements will increase the cost of these instruments.

Two EU directives will have a significant impact on European pensions in the near future. The first is the introduction of the revised directive on Institutions for Occupational Retirement Provision – usually referred to as IORP II.

This revised directive initially caused consternation among defined benefit (DB) schemes when it was first proposed, as it aimed to bring pension schemes more in line with the type of solvency requirements imposed on the insurance industry.

But in response to strong opposition from five key DB member states – the UK, the Netherlands, Belgium, Germany and Ireland – this requirement was dropped and the revised directive, which focuses instead on transparency and governance, was published in March 2014.

While the wording for IORP II has yet to be finalised, this legislation should be passed by March 2016. The directive is in the committee stage in the European Parliament and should

be debated towards the end of this year. Francois Barker, head of pensions at Eversheds, says: “Then there is final negotiation between the Commission, the Parliament and the Council before it hits the statue books at the start of next year.”

Anne Bennett, consultant at Mercer’s retirement resource group, says: “The revised directive has a strong focus on member communications, with considerable guidance on what a member benefit statement should look like throughout Europe.” 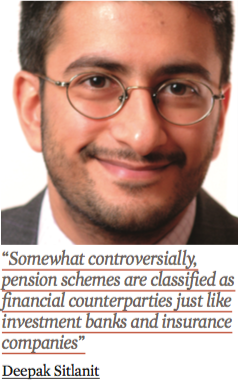 The initial wording in the first draft of IORP II was highly prescriptive, including the requirement that benefit statements should be no longer than two pages of A4. Jayne Hidderley, lawyer at Linklaters, says: “This stance has been softened with the latest report from the parliament saying that such rigid terms should not be dictated to member states.”

Instead, there is a focus on what should be included in a benefit statement taking into account the specific nature of national pension systems and of relevant national social, labour and tax law of the member state, she adds.

Another aspect of the focus on transparency is a proposal to get member consent for every single transfer. Barker says: “This is in conflict with UK legislation which allows trustees of pension schemes to transfer members en masse without consent subject to actuarial certification.”

This part of the directive would be problematic when companies are either buying or selling other companies, schemes are merging or if one pension scheme is closing and members are being moved to another scheme. Barker says: “In these situations it would be impossible to get consent from all the members. 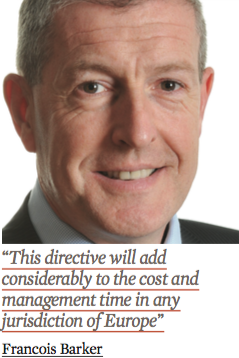 As well as causing difficulties in the UK, it will also cause difficulties in other EU member states, such as Ireland, that allow bulk transfers of benefits without individual member consent. Barker says: “In Ireland, both active members and pensioners can be transferred intra-group without consent, while deferred members with preserved benefits can be transferred only in certain circumstances without consent.”

The part of the directive aimed at improving scheme governance looks more closely at the risk-assessment of schemes along with the qualifications of trustees and providers.

This focus on trustee qualifications is causing concern among some member states – particularly in the UK and in Ireland. Many DB schemes in the UK use lay trustees, while in Ireland there are as many as 200,000 trustees because there is a large number of smaller schemes.

Bennett says: “UK pension schemes are concerned because the new regulation could mean that lay trustees will need additional qualifications, while Irish schemes expect new governance requirements for trustees to be imposed.”

However, recent amendments to these rules lessen the burden on pension schemes. Barker says: “The current version of the directive says the trustees’ qualifications, knowledge and their experience will be assessed collectively.” In earlier versions, each individual had to be assessed.

Hidderley says: “There is a strong possibility that this wording will be the one used in the final version of the directive.”

There is another part of the directive which could increase the costs of running a European pension scheme. Hidderley says: “The scheme will need to appoint a depository which would have safe-keeping and oversight duties.” This was included in the Commission’s proposal and aims to safeguard members’ benefits. However, it is hard to see what benefit this will bring. “It will just be another cost to be passed on to members,” she adds.

While IORP II is a far less radical directive than its predecessor, it will still be a headache for pension schemes across Europe. Barker says: “This directive will add considerably to the cost and management time in any jurisdiction of Europe.”

The second piece of legislation which could pose problems for European pension schemes is the European Market Infrastructure Regulation (EMIR), which was initially published in 2012. The aim of this regulation is to make the derivatives market more robust in the wake of the financial crisis.

Deepak Sitlani, derivatives partner at Linklaters, says: “Somewhat controversially, pension schemes are classified as financial counterparties just like investment banks and insurance companies.” As a result, schemes will have to adhere to some of the more stringent regulatory requirements.

The regulation has already addressed some concerns by introducing obligatory trade reporting to make it easier to assess an organisation’s derivatives position. Sitlani says: “The emphasis has now moved on to to reducing the counterparty risk associated with derivative contracts.” 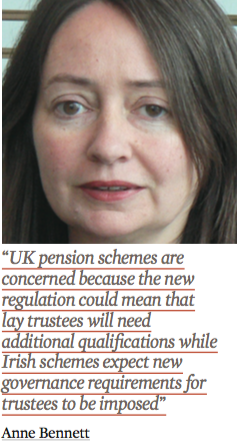 New regulations will be introduced in 2016 on the mandatory clearing of derivatives and how to make un-cleared derivatives safer. These changes could have an impact on pension schemes because many defined benefit schemes use interest-rate and inflation swaps to manage these risks using liability-driven investment.

Sitlani says: “The intent of these new rules is to remove the counterparty risk by having a clearing house acting as a middle man in the transaction.” The purchaser of the derivative contract will have to post initial margin with the clearing house which acts as a buffer as well as post or receive variation margin determined by the fluctuating value of the contract on the market. “The initial and variation margin serves to mitigate counterparty risk,” he adds.

The introduction of these new rules will increase the expense of entering into a derivatives contract. A pension scheme posting initial margin with a clearing house would have to provide collateral which cannot be used to generate returns.

Sitlani says: “The regulation has recognised that setting cash aside is not in the best interests of the scheme beneficiaries, as it would create a drag on investment returns.” As a result, an exemption from clearing is available to pension schemes.

Even though pension schemes are not obliged to clear their derivative contracts it might still make sense to use cleared contracts. Sitlani says: “The cleared derivative is perceived to be safer because of the safeguards the clearing house provides, which could make the overall price of the contract cheaper.”

“The regulator has recognised that setting cash aside is not in the best interests of the scheme beneficiaries, as it would create a drag on investment returns”
Deepak Sitlani

New rules on the margin requirements may persuade pension schemes that it would be better to use cleared derivatives. As an uncleared derivative is perceived by the regulator to still have counterparty risk, there will be a more onerous margin requirements for financial counterparties. Sitlani says: “There is no pension scheme exemption for this rule.”

While there will also be a requirement for a variation margin, this should have less of an impact on pension schemes as most collateralise fully on a daily basis.

Pension schemes will have to think carefully about whether the overall cost of a derivative would be lower if cleared rather than uncleared.

Whether a pension scheme uses a cleared or uncleared derivative, these regulatory requirements will increase the cost of these instruments. “Pension schemes could start to ask when the costs of the derivatives contracts outweigh the benefits,” says Sitlani.