The investment industry is hoping that 2018 will look much like 2017. Are such hopes likely to be dashed?

When it comes to thinking about 2018, it is easy to imagine extreme events. Perhaps, the most terrible would be war in the Korean peninsular, possibly involving nuclear weapons, with tens of millions of people involved. Another possible scenario is strife in the Middle East involving Saudi Arabia on one side and Iran on the other.

Sadly such possibilities cannot be discounted. Indeed there are already several proxy wars between Iran and Saudi-backed forces in Lebanon, Syria and Yemen. It is just that the scale of these conflicts – although involving a heavy human toll – is not yet great enough to have a direct impact on the developed world.

Although geopolitical shocks are easy to visualise, they are notoriously difficult to predict. Just think back to the outlook articles published in the media at the end of 2015 or the start of 2016. Few pundits predicted the majority of Britons would vote for Brexit or that Donald Trump would be elected president of the US.

For such reasons this article will focus on factors that William De Vijlder, group chief economist at BNP Paribas, describes as “anodyne”. Less politely they could be referred to as “boring”. These are areas such as monetary policy, inflation and productivity which are important influences on the financial markets.

Indeed, there is a debate to be had about whether there will be regime change in a financial and economic sense. In other words, whether the benign environment of the past few years will get nastier. The consensus seems to be that the good times are likely to continue unless disrupted by a black swan. But, as history will testify, the consensus often turn outs to be wrong.

No end to QE
Perhaps the most confident prediction for 2018 is that quantitative easing (QE) will not be reined back. This might sound odd since a shift from QE to quantitative tightening (QT) is being discussed. However, the confusion comes from identifying the situation in the US, which is at a later stage of the economic cycle, with the developed world more generally.

As Markus Schomer, the chief economist PineBridge Investments, explains, the trend in the euro-zone and Japan is likely to be different from that in the US. “There is a perception that because the Fed has talked about balance sheet normalisation the support for QE is over but that’s not the case,” he says.

Moreover, the Bank of Japan looks set to maintain its monetary expansion programme at the same rate. “Japan will most likely continue with their $800bn (€680bn) equivalent a year, maybe a little bit less.”

In total, he estimates that there will still be $1trn  in additional money printed next year. The picture broadly tallies with the estimates from the BlackRock Investment Institute (see chart 1). 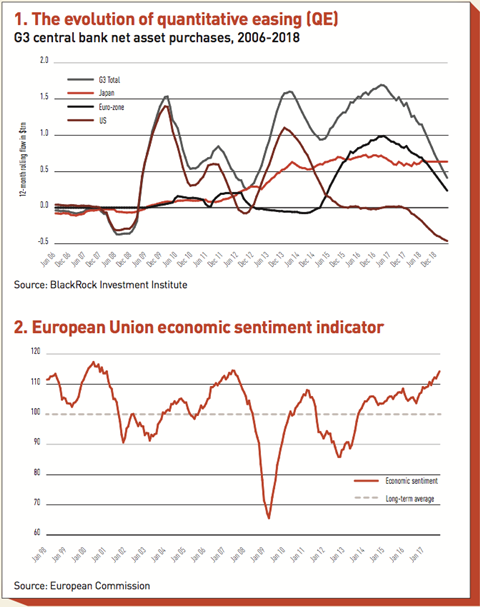 This situation is apparent from several indicators. For example, the European Commission’s Economic Sentiment Index for the European Union was at 114.2 (see chart 2). That is not a record – it reached 117.3 in May 2000 – but it is way above the long-term average of 100. At the other extreme, it fell to 65.6 in March 2009. Similarly the ifo Business Climate index, a carefully watched measure of sentiment among German businesses, reached a record of 116.7 in October.

BNP Paribas’ De Vijlder argues that under such circumstances the markets can be susceptible to corrections. Sometimes these can be triggered by external or exogenous shocks such as those related to geopolitics. Such events are, as mentioned above, hard to predict. But another set of endogenous developments are more straightforward to monitor. These include monetary tightening, a slowdown in global liquidity growth or a change in the capital investment cycle. In some cases, a small shift in these indicators can be a catalyst for a shift in confidence.

However, De Vijlder is sanguine. “The macro backdrop is very supportive for risk,” he says. In his view, the medium-term perspective looks attractive.

Jim McDonald, the chief investment strategist at Northern Trust, takes a similar view. “The single biggest risk to our outlook is a jump in interest rates,” he says. For one thing that would be a drag on corporate profits as the costs of debt servicing would rise.

Nevertheless in his view the economic picture is positive. “The current indications are that the economies look good,” he says. That is despite, what he sees as elevated levels of debt and poor demographics.

Marc Renaud, the CEO of Mandarine Gestion, has a different take on interest rates. “In the short-term, interest rates going up would be good news for equities,” he says. He accepts that this at odds with standard assumptions but argues that conditions are different. The European economy is recovering from the spectre of deflation, so signs of expansion should be welcomed.

Productivity row
Opinions on the real economy are mixed. It is easy to present a plausible case that the economy is suffering from stagnation, with official figures indicating little productivity growth. Given the importance of productivity as a measure of economic vibrancy that suggests a worrying picture.

However, many economists and investment experts suggest that the official data presents a misleading picture. In their view, the standard statistics fail to capture the beneficial effects of new technology.

Valentijn van Nieuwenhuijzen, the chief investment officer of NNIP, identifies productivity as a key indicator for investors to monitor. In his view, there may be an element of mismeasurement in the anaemic levels of productivity growth but it is not the whole story. Information technology may be bolstering productivity in areas such as telecoms, transport, travel and hotels but these only account for a small share of economic activity. He rejects the argument put forward by some economists, notably Professor Robert Gordon of Northwestern University, that productivity has reached its peak.

Northern Trust’s Jim McDonald points to a paper by Martin Feldstein, a Harvard economics professor, which argues that the real growth of GDP, personal income and productivity are all understated (Journal of Economic Perspectives 31(2), Spring 2017). Feldstein’s argument has profound implications because if he is right the US economy is far more vibrant than statistics suggest.

It is unlikely that the productivity debate will be resolved in 2018 but the discussion is far from academic. The difference is between a stagnant economy and a healthy one that is simply mismeasured.

Disruptors become disrupted
Whatever the impact on measured productivity it has become accepted that technology is having a disruptive effect on the economy and society. The best known protagonists include Amazon, Apple, Facebook, Google and Uber, but there are more.

David Semaya, the executive chairman of Nikko Asset Management, sees such disruption as the key trend to follow. “I continue to believe the most important dynamic for investors going into 2018 is this concentration of flows into disruptive technologies,” he says.

Semaya points to a slew of technologies that are having a positive disruptive effect including artificial intelligence, blockchain, driverless cars and robotics among others. Silicon Valley is the established centre for such developments but he also points to hubs in China, Berlin, Singapore and Tel Aviv.

Jim Mellon, an entrepreneur and founder of Charlemagne Capital, puts more emphasis on technologies that could bolster life expectancy. His new book Juvenescence outlines techniques such as cell therapies, genetic engineering and personalised drugs which he says are becoming mainstream.

Although, the range of new technologies has considerable potential a backlash is gaining momentum. The focus is on social media which is accused of facilitating fake news, hate speech and the like. Such initiatives are evidently across the political spectrum.

Nikko’s Semaya sees a chance that such firms will be classified as media companies rather than simply platforms. That would entail tighter regulation. If their share prices fell it would have a broader effect as they account for a sizeable chunk of US market capitalisation.

The odds are that 2018 will see a continuation of 2017’s trends in the financial markets and global economy. Inflection points are relatively rare even though dramatic developments often appear to hail a new era. However, it may not be too long before the apparently benign situation goes into reverse. Regime change may not be that far off.