3
Switzerland: Moves to ease the passage of reforms
Reports

Switzerland: Moves to ease the passage of reforms

The Swiss government wants to avoid the mistakes made in its previous AV2020 reform. As part of that reform, the executive intended to change the first and the second pillars in one go but the public rejected the proposal in a May 2017 referendum.

This time, the executive has decided to separate the reforms. AHV21, as it is called, intends to bring the first-pillar AHV onto a sustainable financial path, at least until 2030. The reform includes a 0.7% VAT increase (to 8.4%), lifting the retirement age for women to 65 years for statutory and occupational pensions, and the ability to choose the pension amount and to draw it between the ages of 62 and 70.

The parliamentary social security and health commission has already approved the retirement age increase and a discussion in parliament has started. As Alex Kuprecht, vice-president of the Council of States and a member of the Swiss People’s Party (SVP) states: “How big will be the compensation measures for women? This will be the difficult question.”

Kuprecht is convinced that a solution can be found for all the other points of the reform, although the VAT tax remains contentious.

He considers the Federal Council’s recommended increase of 0.7% to be “unrealistic” and says it won’t have the support of the political parties.

Kuprecht has initiated a working group to find common ground on the reform between the SVP, FDP, CVP and Green Liberal parties. This group has suggested compensation measures for women of CHF450m-550m (€418m-511m); a flexible retirement age with a reduction of the pension from 63 years rather than 62; and increasing the retirement age for women.

The government has sketched a grim forecast for the AHV. The deficit will reach CHF19bn with financing needs of CHF26bn by 2030, thanks to a tax reform providing CHF2bn yearly. By 2030, according to the Federal Social Insurance Office (BSV), the AHV system will run a deficit of CHF4.2bn.

Nearly three-quarters of the AHV system’s expenditure (73.7%) is financed by contributions from individuals, 5.5% by VAT and 20.1% by the state. “If we go on having a higher share of VAT and a higher share of state contributions, we will move away from a pure inter-generational financing system to a broad redistributive system,” says James Mazeau, retirement and public policy analyst at UBS chief investment office.

The main issue is how to keep the AHV financially afloat in the longer term. “With the current measures to reform the AHV, we can keep going for another couple of years and, as a last resort, the federation would support the AHV with more money,” Mazeau says.

“The real challenge is bringing the AHV back to a sustainable level and trying to fix the issues. We are still at a stage where we are making patches to fix the system. The patches are quite big; they can buy us time but do not really ensure that the financial aspect will be sustainable in the long term.”

“How big will  be the compensation measures for women? This will be the difficult question” - Alex Kuprecht

The VAT increase and the increase in retirement age for women are net improvements but insufficient, in Mazeau’s view. “We will need extra measures, such as increasing the retirement age for men and women; 65 is still too low. You need other reforms such as the reform of the labour market to incentivise people to work until a certain age. These are the challenges that lie ahead even if the AHV21 reform passes.” 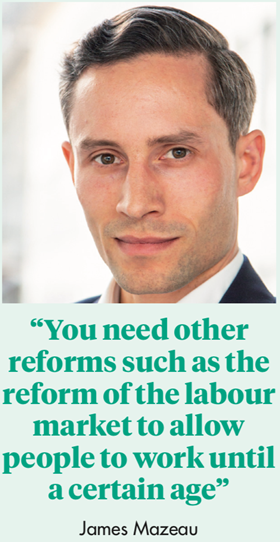 According to UBS’s internal calculations, the AHV system will run out of money in 10-15 years with no reforms and the BSV’s growth assumptions are quite optimistic. “We probably are not going to see 3% GDP growth in Switzerland in the long run,” Mazeau says.

Heinz Rothacher, CEO of consultancy Complementa, says the AHV’s situation is not as bad as has been represented at times, but still rests on the BSV’s “very optimistic assumptions”.

The financial situation of the AHV will have to constantly adapt to higher life expectancy and low interest rates. “This will require further reform,” Rothacher says. The second pillar must be reviewed but “reforms have proven to be very difficult in recent years and several revisions have been rejected”, he says. 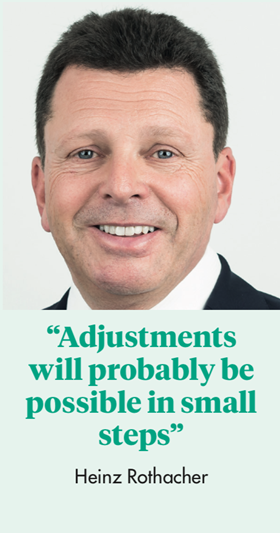 “The electorate seems not to perceive the urgency and politicians prefer to bury their heads in the sand.”

Still on the agenda are a reduction in the minimum conversion rate for occupational pensions to 6% and a pension supplement financed via an additional 0.5% on contributions to the AHV system.

“Adjustments will probably be possible in small steps,” Rothacher believes.

The reform of the pension system might once again collide with the public vote. According to a recent survey by the insurer Groupe Mutuel, 61% of Swiss people are convinced that the AHV is financially strong; 66% has confidence that the second pillar is solid; and 63% trusts the three-pillar Swiss pension system.

Mazeau says: “I think there could be a compromise on the reform of the AHV and a small step could be accepted in the referendum. If we want to move away from or have less reliance on the first pillar we have to strengthen the second and third pillars.”