GSAM found that corporate schemes, among FTSE 350 constituents, experienced a 10-percentage point increase in funding, backed by investments over a fall in liabilities.

While 2013 saw a rise in Gilt yields across a range of tenures, this only translated into a 5.6 percentage point increase in funding levels through a downward pressure on scheme obligations.

The increase in inflation expectations and service and interest costs faced by DB schemes more than undid the funding gains seen. 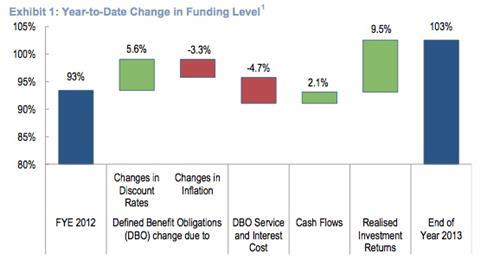 The accounting discount rate used by pension funds is guided by the yield of high-quality corporate bonds, generally assumed to be AA.

Despite an increase in the headline interest rate, GSAM said, the yield from corporate bonds rose at less than one-quarter of the rate.

The manager said a reason for the discrepancy was the rising yield spread between 30-year and 10-year government bonds, with the former only rising by 58 basis points compared with 137bps for the latter.

Conversely, corporate credit spreads narrowed, and as a result, despite the rise in headline Gilt yields, the accounting discount rate did not follow suite, maintaining liabilities.

The Office for National Statistics (ONS), in January last year, announced its decision not to change its calculation method for RPI.

However, market determinants already priced in a decrease to RPI, under the assumption that its calculation method would be more akin to the consumer index, thus lowering the inflation rate.

A subsequent rise in market-implied inflation, after the non-decision, sent scheme liabilities rising by as much as £20bn (€24bn).

In its analysis of investment strategies, which brought about the funding improvement, the manager highlighted some discrepancies between varying scheme sizes.

While somewhat expected, GSAM said smaller schemes continued to be overweight equities, in comparison to their larger counterparts.

Schemes smaller than £100m had a percentage allocation to equities as high as schemes larger than £1bn would to debt, at 52% of assets.

As assets experienced growth of 9.5%, all schemes benefitted from equity market rallies.