Risk and Portfolio Construction: From solo to tango

There is not much that investment professionals can ever agree on, but on one point there is a common view: for much of the late 1990s and 2000s the developed market returns on equities and investment-grade bonds – the two most essential building blocks of any pension fund manager’s portfolio – tended to be negatively correlated.

After that point agreement breaks down. Investors cannot agree on whether this period was a normal state of affairs or an aberration. In other words, are we likely to see a continuation of the negative pattern or a switch to positive correlations?

Correlations have been negative for long enough for investors to have forgotten that in previous eras stocks and bonds tended to move in the same direction.

“Correlations were positive in the 1970s and 1980s because it was an inflationary period,” says Aymeric Forest, head of multi-asset investments, Europe, with Schroders. “These inflationary shocks hit both equities and bonds.”

It was this that prompted the aggressive approach to inflation-fighting among developed-market central bankers in the 1980s. It took a long time for markets to believe that central banks were utterly serious about keeping inflation down at all costs, but by the end of the 1990s they had been persuaded. The response saw yields on government bonds fall to low single digits.

Nick Sykes, European director of consulting at Mercer, contrasts the two eras by referring to his personal history. When he took out his mortgage in the UK in 1984 he paid a rate of 15.6%, because investors demanded extremely high yields in the expectation of high inflation. By the time Sykes paid off his mortgage in 2009 he was being charged only 0.86%.

Some investment managers believe that the conquest of developed-market inflation has created a new normal for equity-bond correlations, which will remain negative for the foreseeable future because the underlying economic conditions have permanently changed. 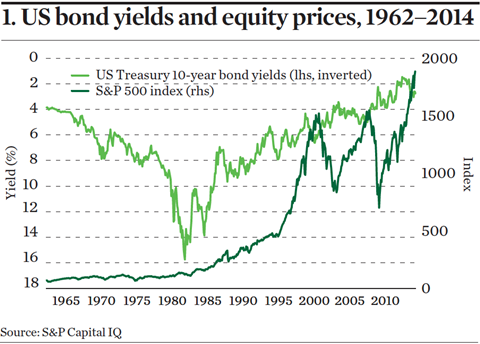 This tallies with a 2013 paper by PIMCO, ‘The Stock-Bond Correlation’, which looks at US stocks and government bonds since 1927. The paper argues that changes in inflation and real interest rates are apt to move stocks and bonds in the same direction. It suggests that when inflation and real interest rates are higher, they tend to play a more dominant role in dictating asset prices – and, hence, in moving stocks and bonds the same way.

“The key question is how much stability of inflation will be part of the environment,” Tindall concludes. He thinks inflation will remain muted by the standards of the 1970s and 1980s and, more importantly, that markets’ strong faith in the desire and ability of developed-market central bankers to keep inflation stable will help to keep bond and equity correlations low or negative.

Alan Dorsey, head of investment strategy and risk at Neuberger Berman, expresses similar sentiments. “The 1970s was not a normal period of time,” he says. “Many people think it was just part and parcel of the normal economic cycle, but I don’t believe this.”

Dorsey cites the relative absence, today, of bottlenecks in commodity production that lead to commodity price inflation, and improvements in productivity – which reduce inflationary pressure.

Nonetheless, there are investment managers who regard the negative correlation of recent times as the real aberration.

“In the long run, lower interest rates [and hence higher bond prices] are better for equities, because this pushes the cost of capital lower,” says John Ventre, head of the multi-asset team at Old Mutual Global Investors. A lower cost of capital increases shareholder profits and pushes up equity prices, making correlations between the two asset classes positive, he reasons. 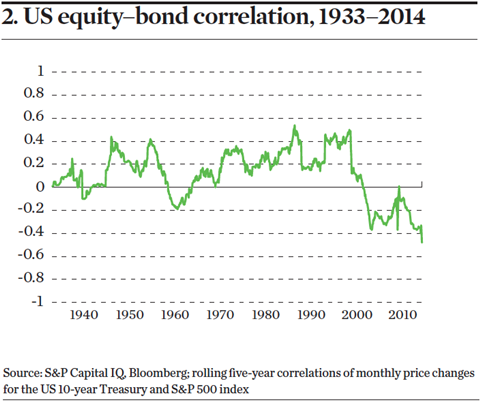 “This quite negative correlation, over the last 10 or so years, is quite an unnatural condition to be in,” he concludes. Ventre explains it by noting a combination of special circumstances, including the fact that equities started the 21st century at high valuations unjustified by economic fundamentals: after the tech bubble burst, equity-market valuations came down – and not even the downward march of interest rates could push them up again.

David McGraw, head of investment strategy and research for Aberdeen Solutions, the multi-asset and multi-manager arm of Aberdeen Asset Management, also sees positive correlations as the norm. Looking at five-year rolling returns from US stocks and Treasuries, he finds only two periods of negative correlation since the Second World War: 1955–65 and 2000–10. But rather than follow Ventre’s logic, he thinks the important element is inflation, inflation expectations and real interest rates – just as Tindall does. The difference is that, looking to the coming years, McGraw predicts that as growth in developed-market economies continues to pick up, “modest inflationary pressure” will start to appear, followed by a central-bank response, and he believes that the relationship between real interest rates, inflation and asset prices will then restore positive correlations.

If those analysts believing in an eventual restoration of positive correlations are right, how should this change investment?

It will force risk parity funds to delever their heavily levered bond investments, says Ventre of Old Mutual. Risk parity funds, which have grown in popularity over the past few years, are multi-asset funds that follow the principle that each asset class in the portfolio must contribute close to the same level of risk to that portfolio. To achieve this, bond investments (which generally exhibit lower volatility) have been highly levered through the use of derivatives. Because positive correlations between equities and bonds will increase the total risk of risk parity funds, much of this leverage will have to be unwound.

Dorsey of Neuberger Berman notes that the correlation between the Russell 1000 Large-Cap equities index of US stocks and the Barclays US Aggregate Bond index has averaged –0.23 over the past 10 years.

“But people should not take false comfort in its reliability,” he warns, citing June 2013, when both bonds and equities fell in response to talk that the US Federal Reserve would start tapering its quantitative easing. “In the short term the correlation changes like a rollercoaster.”

Sandra Crowl, a member of the investment committee at Carmignac Gestion, agrees. “Over the last two decades we’ve been able to say that bond prices do de-correlate with equity prices, in the long term,” she notes. “But we can’t say, ‘I know there will be a mean reversion to the usual pattern of correlation, so as an investment manager I’ll be OK in the end by assuming this pattern’. For active managers that’s not sufficient.” 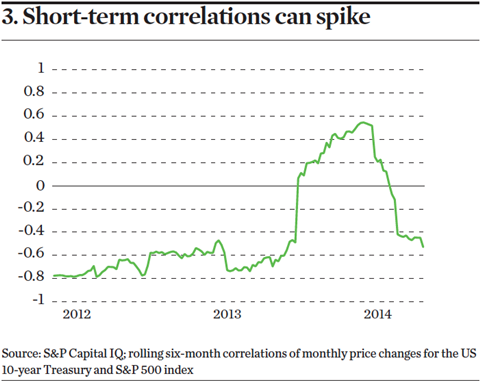 How should pension funds react to positive correlations – whether they become the prevailing pattern or are simply a regularly recurring phenomenon within an overall picture of negative correlations?

Investment managers note that when stocks and bonds lose the ‘natural’ hedge of diversification, risk management requires it be replaced with more genuine hedges for the big asset classes. Crowl of Carmignac Gestion says that non-bond hedges against ‘risk-off’ scenarios, when equities and other risk assets fall in price, include buying the US dollar. However, the list of appropriate tools for hedging against risk-off scenarios must be watched carefully as this list changes over time. “The yen is nowhere near as strongly de-correlated with risk-on assets as it was in the past,” Crowl observes, for example. This drift of the yen away from a clear pattern has been accelerated by aggressive monetary expansion, since last year, by the Bank of Japan. New alternatives include shorting currencies that appreciate during ‘risk-on’ periods, such as the Australian and Canadian dollars and the Brazilian real, she suggests.

Is it sufficient, however, for investors merely to consider the likely correlations between equities and bonds? For some investment managers, this is no longer the central question, because the long bond bull market that has prevailed since the 1980s has brought returns down to such unattractive levels. Pension funds must, therefore, in their view, reduce exposure to bonds in favour of other asset classes – and the correlation of these asset classes with equities must be considered.

“Bonds [may still] offer good diversification from equities, but they do not offer much of a premium,” says Tindall of Towers Watson. “So investors really need diversification in assets that offer a decent return.”

As examples of assets whose prices behave very differently to stocks – while offering adequate returns – he cites property and reinsurance.

Correlations have been unreliable and unpredictable in the past, and will remain so in the future – and even the hedging strategies designed to protect against their unpredictability themselves require constant vigilance to check their continuing effectiveness.