The concept behind risk parity appeals to those who dislike volatility; rather than constructing a portfolio to target returns, funds are built to target a specific risk level. These portfolios aim to improve on the skewed risk profile of the traditional portfolio with a 60% allocation to equities and a 40% allocation to bonds, where equities, in reality, account for a high proportion of the volatility.

Michael Mendelson, principal at institutional investment manager AQR, says: “Overall risk parity had a flat performance in 2013. But it underperformed equity risk-concentrated portfolios because it was a very good year for shares.” Risk parity funds perform less well than traditional markets in rising equity markets because of their lower allocation to equities.

Not only did equities outperform bonds but in the second quarter of 2013 the taper tantrum led to a real-rate shock that caused all asset prices to underperform. “Simultaneous weakness in all asset classes is bad for risk parity because that’s the particular time when diversification actually hurts,” adds Mendelson.

Market conditions have improved since the second quarter of 2013 with most asset prices performing well. The one exception has been commodities, and particularly crude oil. For qualitative investment strategies, performance divergence is not unusual and should be expected. But that is because most strategies have fairly loose definitions and are subject to high levels of interpretation.

In contrast, risk parity is a quantitative strategy. A classic risk parity benchmark strategy assumes all assets have the same Sharpe ratio – the same ratio of expected excess return to volatility and it makes no assumptions about future returns. It then weights the assets according to relative volatility.

“In practice, risk parity managers specify the variance contribution they want to come from each instrument in the portfolio,” says Roberto Croce, director of quantitative research and the portfolio manager for the risk parity strategy at Salient Partners. Then, using their estimate of risk – a variance-covariance matrix – they determine the set of portfolio weights that achieves this risk budget.

While all risk parity managers use the same investment philosophy, there is considerable variance in how they implement the strategy. “Differences will arise from assets that are included and excluded from the portfolio, how risk is measured and forecast and whether they invest over the short or long term,” says Wai Lee, head of the quantitative investment group at Neuberger Berman.

Furthermore, many managers do not stick to the classic risk parity benchmark model and make tactical asset allocations. “While there are some ‘core’ risk parity managers, most would be better described as risk parity-like managers,” says Lee. He says some managers have strayed a long way from a pure risk parity approach and become more closely aligned with active managers. “Some managers run tactical overlays on their portfolios, while others make active security selections in certain asset classes.”

How a manager chooses to weight the assets according to risk within each asset class will also determine how closely the portfolio adheres to the classic risk parity model. “Some managers will apply risk parity within the individual asset allocations while others might, for example, simply use the MSCI World index in the equity within the portfolio,” says Croce. “But using this index is not the classic definition of risk parity, which assumes similar Sharpe ratios across all equity markets in the world would not translate into a portfolio where more than 90% of the risk is in US, Europe and Japan.”

While there is no rule to say that risk parity portfolios cannot be managed with a more active approach, this diverges from the original investment philosophy. “A risk parity manager is supposed to design a portfolio where the risks are much more evenly balanced across the asset classes,” continues Lee. This means risk parity is supposed to be a more strategic portfolio solution than the more traditional approach. 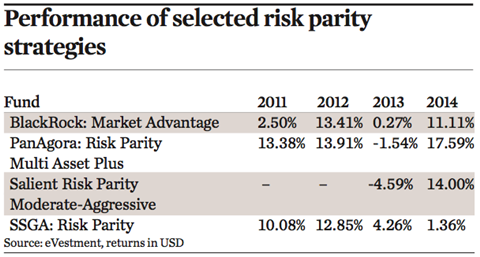 Neuberger Berman takes a purist approach to risk parity and does not mix tactical asset allocations. The risk parity asset-allocation model is determined by the firm’s risk budget and risk model and once set, it is adhered to.

Despite this, many investors believe the firm’s risk parity portfolio runs tactical overlays because its allocation to equities is meaningfully higher than other risk parity managers.

“We have a higher allocation to equities because we our risk model has determined this is the best strategic asset allocation,” says Lee. “We take investment horizon into account when modelling risk.”

This illustrates a key difference between the purist and active approaches to risk parity. Lee says: “Forecasting risk is at the heart of the risk parity approach. But a more active risk manager will also explicitly forecast the shorter-term returns for a particular asset class.”

Neuberger Berman complies with the classic approach – over a certain time period, the risk-adjusted returns of equities and bonds are comparable. Variations over the short term effectively tend to even out over time.

Classic risk parity focuses on forecasting risk rather than returns. Lee notes that while the return of assets tends to vary hugely over time, the ranking of asset classes by realised volatility usually remains consistent – for instance, equities, energy commodities and emerging market debt are all riskier than developed market government bonds. “We may get the exact volatility wrong but as long as we get the ranking of different assets by volatility correct, then a risk parity portfolio will still be robust,” says Lee.

Others view risk parity as a good keystone for construction. Croce says: “In the absence of a strong view on the right strategic asset allocation, the risk parity approach is the right starting point.”

Active approaches to risk parity will apply a wide variety of different tactical approaches. “Some managers might overweight certain assets based on discretion while others will use investment factors such carry, value or momentum,” says Croce. And some managers also vary their risk targets.

As risk parity is a multi-asset strategy and managers have a wide range of tactical options for each asset class and the whole portfolio, the high level of performance dispersion is normal. Some argue that a broad variety of management styles – and return dispersions – is a good thing. “Diversity is desirable,” comments Croce. “It allows each investor to find a risk parity manager that matches their particular philosophy and investment goals.”

Lee concludes: “As long as the manager is clear and tells the client they are running a tactical asset allocation overlay in a risk parity portfolio, and the client is comfortable with this strategy, there is nothing wrong with what our peers are doing.”