While a risk parity strategy involves some complex statistical analysis, the optimal asset allocation is in line with common sense – those who want to construct a portfolio with lower volatility should allocate more to fixed income than in traditional portfolios.

In normal market conditions this high allocation to fixed income would not cause too much concern among investors as in most conditions bonds can be relied upon to deliver relatively modest but smooth returns.

“The risk parity model is based on the concept of efficient markets which assumes all asset classes are fairly priced and have positive expected returns and comparable return-to-risk trade-offs,” says Jason Hsu, vice-chairman of Research Affiliates.

However, from an economic perspective, these are extraordinary times in which standard efficient market theory appears less valid. Monetary policy is extraordinarily loose, with the combination of ultra-low interest rates and quantitative easing (QE). But interest-rate rises are just about discernible on the horizon with the return to growth of the US and the UK, even if that horizon does seem farther away than was once thought.

It is a basic premise of finance that bond prices start to fall when interest rates start to rise. This is why the large allocation to fixed income of risk parity makes investors nervous, depending on their view on when rates will rise.

Hsu says: “In the current environment, the classic risk parity model appears overly naïve – we have the advantage of knowing that fixed income is likely to be more volatile and have poorer future returns.”

A taste of things to come?

Investors received a taste of just how badly risk parity strategies would perform if bond yields were to rise and prices to fall when emerging markets fell dramatically after the US Federal Reserve said it was to reduce quantitative easing in the second quarter of 2013. Risk parity strategies performed particularly poorly for a few months. Risk parity practitioners, however, explain this bad performance in more subtle terms than simply rejecting the bond market. Managers focus on forecasting risk rather than returns in classic risk parity strategies.

The poor performance of risk parity strategies in the second quarter of 2013 can be attributed to incorrect risk estimates, along with asset class correlation not behaving as anticipated. “Risk parity managers wrongly forecast risk in those two months,” believes Wai Lee, head of the quantitative investment group at Neuberger Berman.

Instead of equities and bonds moving in different directions over those eight weeks, the asset classes moved in unison. This was the worst possible scenario for any multi-asset portfolio including risk parity funds. Some argue that investors should not be overly concerned about the impact of rate rises on the performance of risk parity. How such rises are occurring is more important than the fact that rates are increasing.

• Risk parity managers maintain that diversification of the bond portfolio can minimise the impact of rising rates.
• Leverage adds an additional layer of risk but sensible measures can be taken to minimise its impact if bond prices fall.
• Investors should avoid taking an extreme view as the cost is often too high.
• Despite the current environment, risk parity managers argue their approach is still less extreme than that of more traditional managers.

According to Vincent de Martel, managing director in the multi-asset strategies group at BlackRock, historical analysis shows that rates can rise in an orderly or disorderly way.

It is only when rates rise in a disorderly manner that investment performance starts to suffer and during such episodes there are periods when poor performance is correlated across different asset classes.

“Orderly rate rises, however, tend not to result in the poor performance of risk parity performance, as these tend to happen during periods of economic growth,” De Martel says. While the value of the bond portfolio will fall during times of rapid economic expansion, the strong performance of equities will, to some degree, compensate. 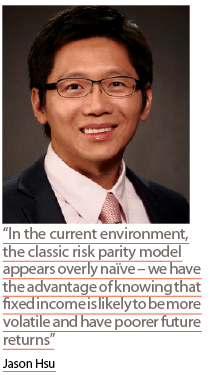 However, while vibrant equity markets will help to compensate for poorly performing fixed-income markets, steps can be taken to further mitigate risk within the bond portfolio. De Martel says: “Rather than looking at asset classes independently, it’s much better to look at the fundamental drivers of return to ensure you do not have too high a concentration to a particular risk factor within the portfolio.”

Monetary policy around the globe is diverging and some central banks are more likely to tighten monetary policy before long, while others will continue to loosen. Portfolio diversification can mitigate the impact of rate rises.

De Martel says BlackRock’s sovereign bond portfolios are geographically diversified, holding Canadian, Australian and Mexican bonds as they are less distorted by the impact of QE. As these markets are driven by different factors, this diversifies the risk profile of the sovereign bond portfolio, making it less exposed to the unwinding of QE. “We do not want to have large allocations to either the US or the Japanese sovereign bond markets, so we have a relatively underweight position,” adds de Martel.

Leverage, in its place

However, there is an added complication to the impact of interest rates on the performance of risk parity funds. While the higher allocation to fixed income allows these portfolios to achieve a less volatile profile, returns can also be lower than more traditional portfolios.

The fact that a fixed-income allocation is currently greater than 100% makes it look like this asset allocation has been more heavily leveraged. In fact, the same leverage factor has been applied across the whole portfolio – in this case a factor of two.

If rates were to rise in an orderly fashion, which would imply healthy economic expansion, bond prices would fall, while equity prices would rise. As the equity portion of the portfolio is also geared, this should provide additional protection from the falling value of the bond portfolio.

But this cushion of potential equity returns is likely to be insufficient to provide protection from the fall in the value of the bond portfolio because the allocation to this asset class is so much greater. This higher allocation to bonds causes concerns for investors because financial gearing increases the impact of a falling market to a painful level.

And with the possibility of rate rises in the US this year, investors are concerned about the future performance of risk parity funds. “Even more perplexing is the use of leverage in those markets where bond yields have turned negative, as holding the bonds to maturity would cause even larger losses,” says de Martel.

Most risk parity managers, however, see little sense in owning bonds with negative yields. They are less concerned about the negative returns and more worried about these instruments no longer reacting to the market in a predictable manner.

Roberto Croce, head of quantitative research at Salient Partners, says: “When bond yields fall below 1%, those instruments become less responsive to macro economy, which negates the purpose of owning these bonds.” Instead, Salient Partners tilts its bond portfolio away from these types of bonds towards those with higher yields. Croce adds: “We re-allocate our risk budget away from bonds that have this feature.”

But while it is possible to avoid an allocation to bonds with a negative yield, risk parity managers still maintain a large allocation to fixed income and these positions will be leveraged.

As long as leverage is used, there will always be the risks associated with gearing. In a seemingly counter-intuitive move, however, BlackRock recently argued that instead of increasing risk, leverage can, in fact, reduce it. “Using leverage enables us to have greater portfolio diversification which reduces the overall risk of the portfolio,” says De Martel.

To ensure that leverage is risk-reducing, he says four criteria need to be met: there must be cash to meet the margin calls; the portfolio must be diversified; all the assets used must be very liquid; and there should not be excessive counterparty risk.

If a risk parity manager sticks to these four guidelines, it will help to reduce the losses if the price of the levered asset should fall. By mitigating those losses, the manager can use a broader range of assets, which will improve portfolio diversification and reduce the overall risk of the portfolio. 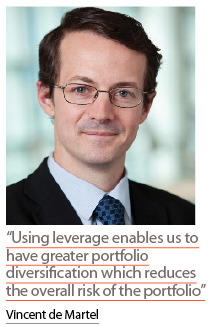 To further reduce the impact of price falls in fixed income markets, the risk parity manager must avoid a set-and-forget mentality when it comes to the amount of leverage used in a portfolio. De Martel says: “We move the levels of leverage up and down, depending on the market conditions.”

In addition to meeting those criteria, risk parity managers must also control portfolio risk and have a plan in place for acting in highly adverse circumstances, adds Michael Mendelson, principal at AQR.

But while all of these steps might help to reduce losses, they cannot be entirely negated. There is no escaping the negative impact of financial gearing when the price of the asset falls. Some argue that the only way to make risk parity still look like a relevant investment strategy in light of the current market conditions is to revisit the original thesis.

Hsu says: “If an asset has low volatility but is likely to experience negative future returns, giving it an equal allocation from a risk perspective seems inappropriate.” The original conceptual framework needs to be modified to allow for likely future returns of a particular asset class.

One solution would be to rework the risk parity model using a different definition of risk: the likelihood and magnitude of negative returns. Rather than focusing on volatility, it might be better to concentrate on the downside risk of an investment. “This would factor in both volatility and return,” adds Hsu.

However, if an investor is convinced that bond prices are going to tumble, the best course of action would be to avoid risk parity managers altogether. Mendelson says: “In fact, you should own hardly any bonds at all.” 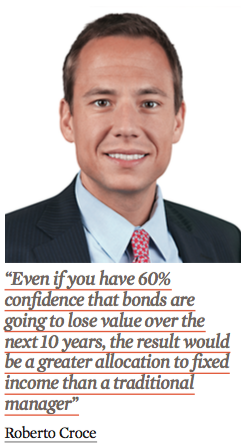 But before issuing the sell order on the risk parity portfolio or, indeed, on a fixed-income portfolio, it is worth remembering that, although interest rates will inevitably start to rise at some point, the shift has failed to materialise for several years.

Despite expectations of rises, the reverse has occurred. Yields have fallen further and bond prices have continued to rise. Investors with significant allocations to fixed income have performed well.

Getting the timing right on future interest rate moves is difficult as it necessitates correctly predicting the behaviour of central bankers. This is a notoriously difficult task. Given the inherent difficulty in making such forecasts, some would caution that a more balanced approach is merited. Mendelson says: “The cost of taking an extreme view which is not proved correct is very high.”

A more rational approach would be to choose a risk parity manager who has put the right risk measures in place to manage the risks associated with using leverage and will tweak the portfolio as the market risks fluctuate.

“After all, the whole idea behind a risk parity portfolio is to take a more balanced and less extreme approach than the traditional portfolio of 60% equites and 40% bonds,” says Mendelson.

Croce agrees: “Even if you have 60% confidence that bonds are going to lose value over the next 10 years, the result would be a greater allocation to fixed income than a traditional manager.”