The pace of development of the Romanian financial markets slowed in 2015. Owing to political uncertainty, the planned IPOs of government-owned companies, which had propelled the markets beforehand, ground to a halt. This left a sour taste for Romanian second-pillar pension funds, as they drew vital energy from new listings, relying on them to diversify their portfolios.

Despite the lack of major capital market activity, the Romanian pension system continues to grow, albeit at a slower pace. This is due to the overall positive performance of the country’s stock market and fixed income market, as well as the mandatory nature of the second-pillar pension system, which ensures as steady flow of contributions.

The capitalisation of the Romanian stock market grew 9% to RON144bn (€32bn) in the 12 months to December 2015, while the cumulative growth in previous the three years was 53%.

Total assets in the mandatory second pillar were RON23bn (€5.15bn) as of October 2014, according to the financial regulator Autoritatea de Supraveghere Financiară (ASF) (see figure). Assets in the second pillar, which represent 95% of the market, grew by 28% in the 12 months to October 2015, compared to 39% in the previous 12 months. 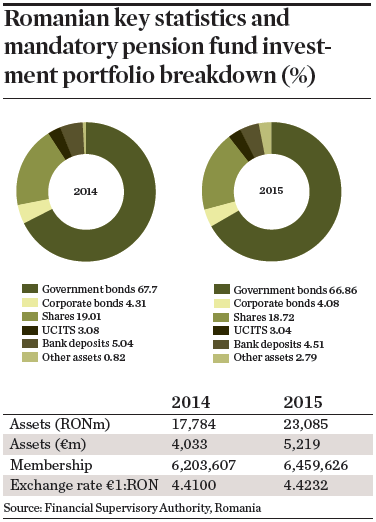 Second-pillar membership reached 6.5m in in the latter part of 2015, growing 4% over 12 months. Because workers are auto-enrolled, the vast majority of the workforce (about 70%) is insured.

Romania’s economy, and consequently its pension funds, is also benefiting from a benign economic picture, which is attracting foreign investment in its industry and financial markets.

But the pension system is not just growing in numbers. It is slowly adapting to changing needs and developing a more complex and solid structure. This is thanks to the intense dialogue that is taking place between pension funds, lawmakers and regulators on several fronts.

Last year there was significant progress on asset allocation regulation. First, the regulator loosened the risk requirements for pension funds. Miahi Bobocea, adviser to the board of APAPR, Romania’s pension fund association, says the change, albeit limited in scope, could potentially spur greater allocations to equity and riskier asset classes.

Second, the regulator has allowed over-the-counter trading of corporate bonds by pension funds. Previously funds were only allowed to trade those assets in primary and regulated markets, which affected the liquidity of the instruments. Bobocea believes this too could have a small but significant impact on portfolios, with an increase in allocations to corporate bonds.

Finally, since last year third-pillar pension funds have been able to use interest rate swaps for hedging purposes. This is a pilot scheme, explains Bobocea, and the regulator has made a clear distinction between the use of swaps for hedging and speculation (the latter is not allowed). If the scheme works, there is a potential for extending the measure to the second pillar.

Bobocea adds: “We are yet to see a significant impact from these changes. But although impact is limited today, each small change will add up to something.”

Yet he notes that the APAPR is “not entirely happy” with the way investment regulation has been modified. “We are working on our arguments to support the case for removing restrictions further, so that new asset classes can be added to portfolios.” 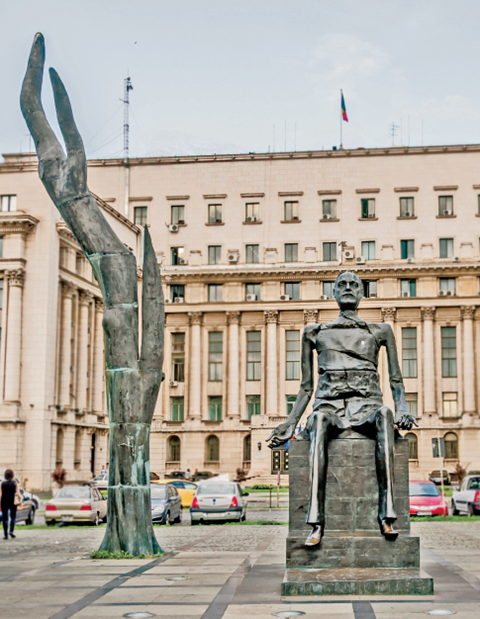 But diversifying the potential sources of return, before assets are actually available, will not necessarily transform portfolios. Alina Nacu, CIO of the Allianz-Tiriac pension fund, says: “The framework can always be improved. But we should maximise opportunities that are available in the current framework, before we look at other asset classes.”

Nacu laments a lack of investment opportunities in the equity markets and the corporate bond markets. She points out that private companies are particularly slow to come to the public markets, due to their reliance on the banking sector. This is a trend that is observed across Europe.

In theory, Romanian pension funds can invest abroad. “But we have to hedge our currency exposure, and the Romanian markets do not offer liquidity on futures or regulated derivative contracts,” explains Nacu. “In order to hedge, we have to structure all kinds of agreements with banks. We need a more easily manageable internal framework, and developments in the banking sector, to make that work”,

As a result, pension funds are mostly invested domestically. The Allianz-Tiriac pension fund has only 3% of its assets held overseas.

Aside from asset allocation restrictions, much work needs to be done in the Romanian pension world and funds are preoccupied with the need to raise contribution levels into the mandatory second pillar. The 2008 pension reform determined an annual 0.5 percentage point increase of second-pillar contributions, with a target to reach 6% of employees’ gross salaries by 2016.

However, the measure is effectively reviewed every year in the budget law. Contributions are currently at 5% as the government left the contribution rate unchanged for one year. Pension funds have been lobbying to get the programme back on track and make up for the missed increase. It remains to be seen whether the 2016 budget will increase the rate.

Leaving the contribution rate unchanged for a year seems like a tolerable delay, but second-pillar funds have not been shy in voicing their disappointment. Raluca Tintoiu, CIO of second-pillar fund NN Pensii, says: “Any delay in the planned implementation of the system is a problem. We are facing one of the biggest demographic challenges in Europe, with population growth turning sharply negative in the early 1990s after the fall of communism and a very steep retirement schedule for the next 15 to 20 years.”

Tintoiu points out that in the first-pillar unfunded pension system, the ratio of employees to pensioners is expected to fall, putting huge pressure on the system. Considering the challenging demographics, increasing contributions to the second and third pillar would boost the overall sustainability of the pension system.

Tintoiu believes the government should focus more decisively on third-pillar pensions. “The voluntary pension sector is still underdeveloped, and the mandatory second pillar will not be enough to solve our demographic problem. We believe the product design can be improved to appeal more to the market.”

However, when it comes to pension funds, Romania compares very favourably with other CEE countries, some of which are dismantling their second pillar. And, despite the political uncertainty, says Bobocea, the risk that the government will nationalise all or a part of Romania’s private pension assets is negligible. 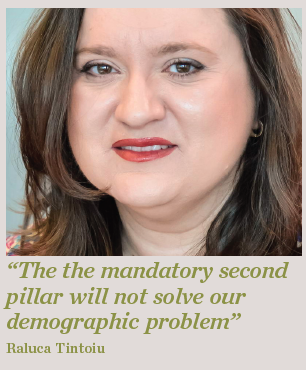 “The Romanian pension industry has never been in a better position,” says Bobocea. “Pension funds have demonstrated good performance in terms of investments and operation, and benefit from a solid reputation.”

Ultimately, the pace of development will be dictated by politics. In late 2015, Prime Minister Victor Ponta resigned following protests. A technocratic government led by Dacian Cioloș was formed to steer the country towards elections in 2016. All this certainly could put the state IPO programme on hold, at least until a new government is elected.

But the markets is braced for further IPOs, says Greg Konieczny, CEO of Fondul Proprietatea, the country’s RON12.6bn (€2.8bn) restitution fund managed by the US asset manager Franklin Templeton. Konieczny says the work on the IPO of Hidroelectrica, a hydro-energy business, is going to happen, and is expected to outstrip the IPO of Electrica. The energy company came to the market in 2014 in the largest IPO on the Romanian stock exchange, which valued it at RON1.95 (€440m).

Konieczny adds that the government has also began working on the IPOs of Bucharest Airport, the Port of Constanţa, and Poşta Română, the postal company. All this could bode well for the country’s institutional investment environment.