Think you understand and grasp the concept of blockchain technology? Prepare to be surprised as Daniel Ben-Ami explains the theory and potential uses within securities services

• The term ‘blockchain’ is widely known, but few understand what it means.
• It is a file that can be shared between entities.
• Characteristics include the lack of a single centralised record, security and the ability to resist amendment.
• Applications are in their early stages at present but the potential is great.

It is always difficult to predict with accuracy which technological innovations will take off. Even experts get it wrong. Breakthroughs which were anticipated with confidence, such as flying cars, have failed to materialise. In contrast, some inventions, such as text messaging, achieve unexpected success.

In the case of blockchain it has reached the stage where people have heard of it, few can define it and even fewer explain it. Technical specialists from the securities services industry, central banks and trade associations are working hard to remedy these deficiencies.

Despite the lack of knowledge there is no shortage of hype. A 2015 study produced for the World Economic Forum in collaboration with Deloitte made the claim that: “Decentralised systems, such as the blockchain protocol, threaten to disintermediate almost every process in financial services.” Many are hailing its potential to revolutionise the investment industry in particular. Outside the financial world there is talk of using it for a variety of applications including tracking individual diamonds, making back-up copies of human DNA and simplifying trade documentation.

This article will outline the current state of knowledge for non-specialists in the investment and pensions industries. It will start by identifying the key features before considering how it could be implemented.

Many of the definitions of blockchain are not enlightening. A popular one is to describe it as the technology underlying Bitcoin. This indeed was its original purpose when the idea was developed several years ago. Such a description is helpful for those with a familiarity with the crypto-currency but perhaps not others.

The approach also blurs the differences between Bitcoin and other uses of blockchain technology in financial services. Bitcoin is an open system which, in principle, anyone can harness. However, most uses in financial markets are only likely to be open to authorised participants.

Another approach to defining blockchain is to refer to it as distributed ledger technology (DLT). This has the drawback of assuming knowledge that many do not possess. Many are unfamiliar with the role of a ledger, let alone of the significance of making it distributed.

Preston Byrne, the chief operating officer of Eris Industries, a financial technology (fintech) firm, explains it in simpler terms. “Blockchain is a database,” he says. “It’s a file. A file which updates itself in multiple places at once, depending on what its users tell it to do”.

This definition has the virtue of simplicity but it does not make clear why its advocates see blockchain as having so much potential. HSBC Securities Services spells out the technology’s key characteristics in a briefing:

• Distribution: rather than relying on a centralised record it has a shared ledger which is visible to every node or participant.
• Security: the use of cryptography makes the system public yet secure.
• Immutability: blockchain technology is designed to prevent tampering or amendment.
• Trust: blockchain data can act as a trusted, mutually agreed record.

From this starting point, the potential impact on the investment industry becomes clear. Akbar Sheriff, global head of strategy and office of regulatory initiatives at State Street, explains that a typical securities industry transaction can include as many as five entities. There are two principals (the buyer and seller), often each of them will have their own agents (broker-dealers). The transaction will typically go through a neutral clearing house.

Blockchain would simplify this considerably by cutting out the need for agents. “Such technological advances present the opportunity to overhaul existing models, speed processes, and streamline costs,” says Sheriff. 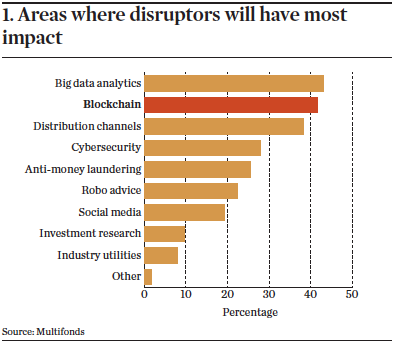 It would also mean a move away from the conventional ledger. Instead, there would be a distributed ledger. “It’s a new way of working where to a certain extent where if you exchange assets or contacts you potentially no longer need a central point of reference,” says Philippe Ruault, head of innovation and digital lab at BNP Paribas Securities Services.

In his view, it would have several advantages. It would be faster, more resilient, operate across borders and be cheaper.

It is certainly a technology that the investment industry – including not only asset management but custody and asset servicing – expects to have a considerable impact. A survey conducted in March 2016 by Multifonds, an investment software firm, found that 41.6% of respondents expected blockchain to be a potential channel of disruption (see figure 1). Only big data analytics, at 43.2%, scored higher. In contrast, robo advice was at 22.4% and social media at 19.2%.

Nevertheless, there is a difference between seeing blockchain as desirable or inevitable, perhaps both, and its implementation. Blockchain represents a fundamental shift in the way transactions have been done. It could operate in multiple markets and across many jurisdictions.

It also raises questions for regulators about how they can handle the new way of working. Using the new technology within companies should not be a problem but changing market infrastructures is another matter. “How it flies in terms of the regulatory framework is still something to be assessed,” says Ruault. 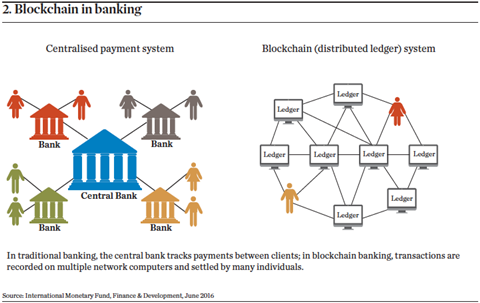 Blockchain, therefore, is more potential than reality. Although, the concept is becoming accepted there are few examples of its implementation.

The best known is probably Bitcoin, itself although there are several hundred crypto-currencies in existence. In effect these are a high-tech and secure alternative to cash. They are designed to provide a secure way of making payments, sometimes beyond the gaze of the authorities. Indeed libertarians have often advocated Bitcoin as they see it as representing freedom from state interference. Others fear that they will be used to facilitate criminal activity. In any case crypto-currencies have so far failed to live up to the hype invested in them.

Nevertheless, there are tentative moves for international banks to use blockchain technology for cross-border payments. Ripple, a start-up company based in San Francisco, is starting to make a mark in this area. For example, Santander, the UK bank, has used Ripple’s technology to drive a pilot version of a new smartphone application that allows international payments.

Nor has the use of blockchain been confined to banking. The Nasdaq used the technology to complete and record a private securities transaction last December. The exchange claimed it was the first transaction to use the technology.

The number of applications is likely to surge before long. Financial services companies and fintech firms are in the midst of feasibility and pilot studies. No doubt many are not yet in the public domain.

Eiris Industries, which was set up by lawyers and software specialists, sees potential in the legal industry. “We think this stuff is good at automating relationships and we’re a bunch of lawyers,” says Byrne. “Lawyers manage and formalise relationships in real life. What we do is applying that knowledge to software.”

However, he says he knows of systems starting to go into production within the financial services industry. At present, he says, the focus is on the banking and insurance sector, but asset managers are starting to look too.

He points to some applications that sound like science fiction but might not be too far off. For example, those managing car loans, whether directly or within collaterised instruments, could achieve a higher degree of security. If repayments on the loan stop the lender could send a cryptographic signal to immobilise the car. It might even be possible to instruct it to drive back to the garage. This enhanced control over collateral could allow lenders to shave basis points off the cost of loans.

Blockchain technology could even allow the secure control of drones over the internet. Whether this would have any applications for the investment and pensions industry is not yet clear.

Although blockchain creates challenges for regulatory institutions it also offers opportunities. Central banks in particular are examining how to use it for their own purposes. In June 2016, the World Bank, International Monetary Fund and US Federal Reserve hosted a conference on the subject in Washington DC. Representatives from central banks around the world attended. Details of the talks were not released, but there are reports of central banks setting up digital currencies of their own. The Bank of Canada is already experimenting along such lines with the development of the CAD-coin, a digital version of the Canadian dollar. Such currencies could also allow individuals and firms to open their own accounts at central banks rather than reserving that privilege for retail banks. The possibility of using the technology in specific niches, such as in secondary markets for more exotic securities, has also been raised.

No doubt the current discussion of blockchain involves considerable hype. Even avid advocates of the new technology seem to accept that is the case. But even if a fraction of what is promised ends up being delivered the impact on securities markets could be considerable.