• It is hard to work out the likely impact of America First policies on US smaller companies as there are so many uncertainties at present
• Representatives of both of the main political parties in the US support protectionist policies
• Low interest rates have enabled poorer quality companies with more leverage to outperform unleveraged, cash-rich companies
• Rising rates could allow fundamentally stronger small-cap companies to outperform

It is not clear that President Donald Trump’s ‘America First’ policies with trade tariffs disrupting global trade will end up leaving the US better off in the long term, let alone in the short term.

US small caps, being more domestically focused, are often seen as less vulnerable to disruptions in global trade. But there are numerous uncertainties at present including in relation to interest rates, tax rates and geopolitics. As a result, it is hard to discern the overall impact on the asset class.

Large-cap companies with more exposure to global trade and global supply chains may face more problems than small companies. The latter are more domestically focused in terms of customers and supply chains. But even here, the impact for many will be severe. It is true that the small-cap universe looks different from the S&P 500, most notably with a significant lower exposure to tech stocks. But it is hard for small-cap companies to not also be affected by disruption of global trade.

“The key point to realise about small caps is that treating them as a single group is a mistake,” says James MacGregor, a portfolio manager at Alliance Bernstein. Many see lower tax rates, for example, as likely to disproportionately benefit small caps, given their higher effective tax rates relative to large caps. But the impact on investors will vary on a company-by-company basis. Some firms will use lower tax rates as an opportunity to increase market share through reducing prices. Others will pass on the benefits to their investors.

Trump’s trade policies have been focused on China but it is not just the trade deficit that has given rise to concerns, says Evan Brown, an asset allocation analyst at UBS Asset Management . Trump has surrounded himself with long-time China hawks such as US Trade Representative Robert Lighthizer and director of the White House National Trade Council, Peter Navarro, author of the 2006 book The Coming China Wars: Where They Will Be Fought, How They Can Be Won. They have been concerned about trade practices with China for years amid worries over the geopolitical implications of a tech and artificial intelligence arms race with China.

Such concerns are not just held within the Trump administration but also by many members of Congress from both parties. “Tariffs may be a blunt instrument to address these issues, but I do not doubt there are meaningful issues beyond the trade deficit that the Trump administration is looking to address,” says Brown. Grappling with the implications of a more hostile stance by the US administration towards trade with China in key areas may well be important for some US small caps. However, it is only at the company-specific level that any serious analysis can be undertaken of the implications.

Given the less efficient nature of the small-cap marketplace, the new, perhaps more complex and volatile environment gives active managers the opportunity to outperform. The US small-cap marketplace has been heavily influenced by money flows into passive indexes rather than business fundamentals. But, says Neuberger Berman in a recent note: “this is not capitalism, however, and we believe that ultimately the most deserving business models will again attract capital at the expense of the less deserving ones”. The firm cautions against trying to time a transition back to higher-quality investments – shifts, often prompted by adjustments to monetary policy, can be abrupt and forceful.

Looking at the small-cap marketplace through the lens of an index such as the Russell 2000 can give a misleading impression of both risks and rewards. Gregory Spiegel, a small-cap specialist at Neuberger Berman, points out that a fundamental problem with firms in the index is that over a third of them report losses. This compares with just 10% in the S&P 500. Moreover, the percentage of loss-making companies within the index is trending upward. So, the Russell 2000 index reflects much lower quality companies.

Neuberger Berman’s research suggests that loss-making companies underperform profitable firms over the long term. Small companies with fewer product lines and corporate divisions may be simpler to analyse but the concentration leads to more specific risk. Investing in broad indices diversifies away specific risks but also averages out returns. The opportunity for active management of US small caps lies in the diversity of the marketplace. 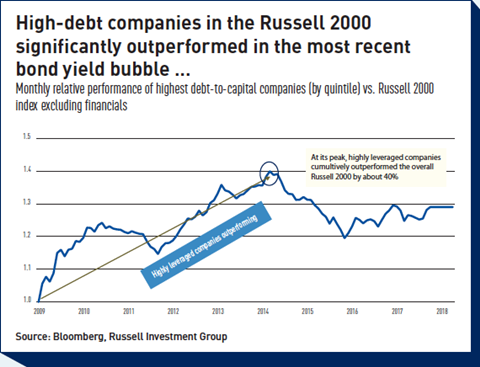 The size of the US small-cap market and its status as a recognised separate asset class is seen in the hundreds of dedicated small-cap fund managers able to survive and prosper in the US. This is in sharp contrast to the relatively small numbers of dedicated small-cap managers in Europe as a whole. It is also seen in specialisations of small-cap value versus small-cap growth. The two universes can differ by sector with interest rate-sensitive utilities more prevalent in value portfolios. In the past 18 months growth has generally outperformed value. As a result, value stocks are trading at their most attractive levels relative to growth on a number of metrics since the end of the global financial crisis, says MacGregor.

A rising-interest-rate environment is one macro-factor that has some broader implications. Neuberger Berman finds that the low interest rates since the financial crash have enabled poorer-quality companies with more leverage to outperform unleveraged, cash-rich companies. At its peak, highly leveraged companies cumulatively outperformed the overall Russell 2000 by about 40%.

Borrowing for small companies is predominantly through floating-rate debt as they rarely carry investment-grade credit ratings enabling them to fix longer-term financing through bond issues. But with the US Federal Reserve hiking rates, the era of leveraged companies outperforming might have come to an end. It may be the turn of fundamentally stronger small-cap companies to outperform. That, says Spiegel, should favour their strategy which focuses on high quality companies with strong balance sheets, lots of free cashflow, above-average profitability, attractive returns and strong barriers to competitions which are held for long periods of time of about six to 10 years.

Should investors see US small caps as a haven from possible global trade wars? Brown and his colleagues at UBS Asset Management contend the term ‘trade war’ should be viewed in an historical context. They estimate that total proposed tariffs, including on vehicles, which – given global supply chains, seems less likely – would bring the US effective tariff rate to just above 5%.

While this is a meaningful increase from recent years, it is not comparable to the protectionism which exacerbated the Great Depression of the 1930s. Trade still represents a relatively small proportion of overall economic growth. US small caps may offer attractions over US large caps but finding them means searching through the weeds rather than relying on top-down generalisations.