Harnessing the small-cap effect can come at a cost

The small-cap effect, with smaller companies tending to outperform larger ones over time, has been well known for decades and subject to much academic research. But small-cap investing still raises many challenges because of the illiquidity and associated raised transaction costs.

If there is a size effect it comes with a lot of volatility, says Mark Roemer, a portfolio manager at Acadian Asset Management. Much of that noise is associated with illiquidity and hence the poorer quality of price information.

Yet, says Garrett Quigley, managing partner of Global Systematic Investors (GSI), numerous researchers have shown the size effect is not confined to small and micro stocks but there is also a big uplift in mid-cap stocks.

“Historically people had thought that the small-cap effect was limited to 5% or 10% of the market – you really had to dig into the small caps to get a premium,” says Quigley. “But that is not the case at all. You can get a healthy premium from mid caps as well as small caps.”

What is important, though, says Quigley, is that sector groupings are not narrowed or distorted too much by extreme concentration to small caps – by having a more balanced exposure across sectors, the returns from the size effect can be improved.

A more serious criticism of the small-cap effect is voiced by Luc Dumontier, head of factor investing at La Française Investment Solutions (LFIS). He is not keen on trying to harness the effect because for his firm the most important risk to control is re-correlation risk, especially on the down side.

What happens to other factors lower down the size spectrum? Generally, says Quigley, researchers would argue that factor effects get stronger further down the capitalisation scale. A simple reason could be that factor dispersion is greater further down the size spectrum and therefore the characteristic differences are larger. It could also be argued that the opportunities for arbitrage are less among small caps. So perhaps the markets are less efficient. They are clearly riskier so the risk factors may be higher for small caps. 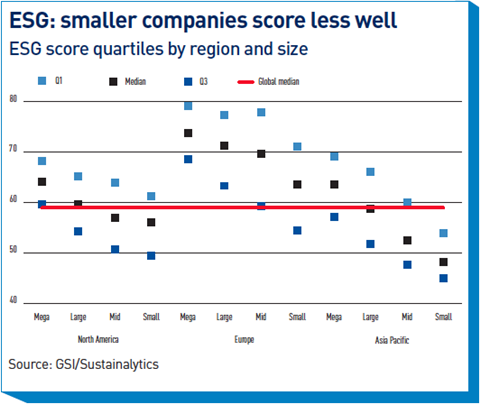 LFIS has tried to eliminate this quality negative bias through double-sorting approaches by trying to create small cap-biased portfolios within a high-quality stock universe. It found that while that approach does show some outperformance, it was not significant enough for now to make it worthwhile implementing a small-cap bias within their funds.

If combining a small-cap bias in an all-cap fund may be problematic, there is still a case to be made for having separate exposures to small caps. Indeed, Quigley argues that in deciding how to allocate active risk it is worth remembering that there is likely to be a better risk/return trade-off for factor-risk exposures in small caps. That is one of the difficulties with fundamental indexing, which has a bias towards large-cap stocks.

Using a quantitative factor-based approach to small-cap investing does make sense. The MSCI ACWI Small Cap index has over 6,000 constituents yet still represents only about 14% of the free float-adjusted market capitalisation in each of the 23 developed and 24 emerging markets that it includes. Few firms would have the resources or, indeed, can make a business case to manage global small-cap portfolios based on a traditional purely qualitative stock-picking approach.

Yet the benefit of allocating more active risk to small caps is in the breadth of the universe. To the extent that there is some independence across those bets, managers can benefit from the larger number of bets. What they do have to manage, though, is the impact on sector exposures. Telecoms, for example, are typically large companies. A tilt towards small companies, will underweight telecoms relative to their market weight, possibly eliminating them completely.

GSI’s approach is to maintain a more diversified sector exposure, so if a size tilt results in lower weights in some sectors, they will reweight the sectors to improve sector diversification. Small-cap indices such as the Russell 2000 and MSCI Small Cap disregard sectors altogether. They form the index purely based on rank of market cap. It is simpler but leads to a less efficient outcome, argues Quigley.

The flip side of small caps is that the investability becomes more challenging further down the size spectrum. Acadian manages small-cap portfolios using four factors – value, quality, growth and a combination of technical factors such as momentum.

Liquidity is taken account of explicitly in the investment process, explains Roemer, and is looked at from three perspectives: first, in an alpha context; second, from the viewpoint of portfolio construction; and last, in terms of Acadian’s total liquidity requirements on a day-by-day basis.

One reason for the value and size effects in emerging markets could be that foreign investors going into emerging markets tend to bid up the large companies because they are the most liquid, the best covered and the most transparent and they tend to be in the big indices. As a result, the mega caps tend to become more highly priced relative to smaller stocks.

An important trend is the incorporation of ESG criteria into decision-making. That can be problematic when it comes to small caps and factor investing. Companies with high ESG scores tend to be larger – they are better able to afford programmes to develop ESG capabilities. Smaller companies may not have the resources to do that.

GSI is looking at developing an ESG-tilted fund but is wary of distorting the factor exposures too much by tilting towards higher-ESG companies. Ranking only by ESG and ignoring factors would create a narrower universe and tilted towards larger and more profitable companies but away from value and small cap, says Quigley. “Historically some researchers have shown that tilting towards ESG could impair performance because of that,” he says. But by combining ESG tilts with factor-tilting exposures it should be possible to improve returns through factor tilts but also maintain the ESG exposure of the portfolio. For ESG-focused investors, that could provide a worthwhile approach to the global small-cap opportunity set.