Once you have decided to invest in equities there is an almost unending range of ways to do it. Ultimately you are forced to decide not only which businesses to own but also the size of your stake. Traditionally, under the rubric of active management, this was entrusted to an investment professional with a perceived talent in divining what to buy and sell.

During the late 1950s and 60s, Harry Markowitz and William Sharpe conjectured that investors should only be rewarded for bearing risk (specifically the market risk that cannot be diversified away). If their theoretical model were true, the maths stated that, over the long term, no investor could expect to out-perform a market capitalisation-weighted portfolio. Increasingly, as statistics were brought to bear, evidence mounted that, collectively, active managers underperformed stock-market averages. The often-repeated explanation is that, since such managers dominate the market, one would expect their average performance before fees and costs to be just that: average. After fees and costs they should then collectively lag behind.

Based on this evidence and a compelling theory, the cult of passive investing was born. Passive investing seeks to mimic an index – like the S&P 500 – which selects companies based primarily on their size. An index is just a set of rules (or a system) that tells you how to select and weight companies. The virtue of making investment decisions in this way is that it is repeatable and can be evaluated historically, and the computer does not demand an annual bonus. The further virtue of a market capitalisation-weighted index is that it incurs almost no turnover.

Gradually, the market became synonymous with a market capitalisation-weighted index. It was as if this construct had been handed to us on a tablet of stone.

Now investors had to choose between active and passive. Proponents of the two schools argued zealously over the question of market efficiency. At Winton we think this bipolar view is an oversimplification. When managing a portfolio the question is not ‘Are you active?’ but rather ‘How active are you?’ The more active you are, the greater the costs you incur. The greater your costs, the more skill you require. One of the most compelling attacks on market-cap weighting is the evidence that choosing stocks at random outperforms.

Smart beta offers alternative sets of portfolio weights (of which there are an endless number). Its origins, too, lie in academic research initially published in the 1990s (for which Eugene Fama received a Nobel Prize last year). It considers the returns of a stock to be related to factors such as measures of value, size, stock-price volatility and recent price momentum. For some time such style factors have been used to try and retrospectively explain the performance of investment managers, and using them to make investment decisions is familiar within quantitative finance. 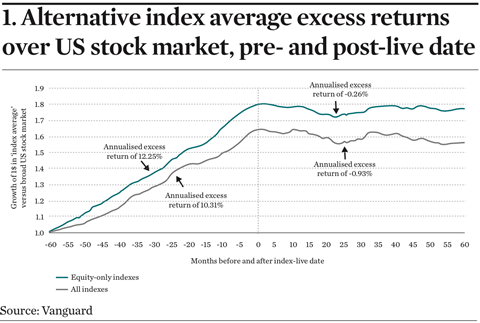 What is perhaps new is the idea of offering transparent, simplified versions of such systems, with their rules fixed in time, in exchange for much lower fees. Yes, these are also called indices rather than systems. Pile them high and sell them cheap!

However, the ability to historically evaluate the performance of a new index is not without its pitfalls, since it opens one up to the benefit of hindsight. In a 2012 paper, Joined at the Hip, Vanguard showed that, of 370 new alternative indices that it studied, the hypothetical pre-inception performance was, on average, very optimistic – actual realised performance looked very similar to that of a market capitalisation-weighted index (figure 1).

In a 2013 working paper we repeated the same exercise on data for new entrants into the quantitative hedge fund industry, in which we operate, with similar conclusions (figure 2).

We feel that optimism is endemic when designing investment rules looking in the rear-view mirror. A hypothetical track record is not comparable to the real results of actual investors who have been there and got the t-shirt and battle scars to prove it. 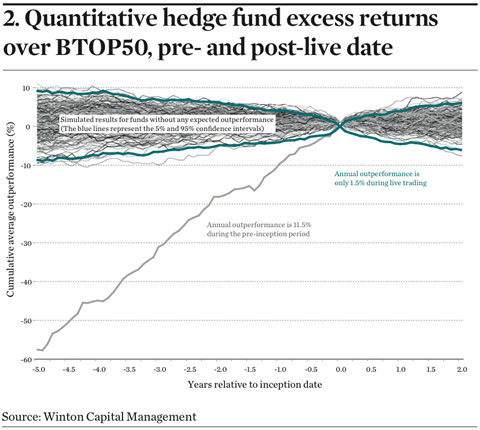 Is smart beta a silver bullet? Where traditional stock market investing is concerned, we think that avoiding high turnover makes sense, as do low management fees. We also believe that investing according to a set of repeatable rules has clear virtues. Beyond this, there is evidence that you should avoid concentrating your portfolio in such a way that the largest companies have the biggest weights. To this extent, smart beta is appealing.

However, treat results that rest on the benefit of hindsight with extreme caution. Knowing what has worked in the past is not the same as knowing what will work in the future (although it does make for a good marketing presentation). With the propagation of thousands of new indices there will inevitably be many investors who will end up disappointed. At Winton we are experienced in designing and running investment management systems and have seen no evidence of there being silver-bullet solutions that can be built and then forgotten about.

Smart beta blurs the distinction between active and passive. About time, we say. Can a few simple rules match the results of those talented managers that have achieved consistent long-term success? Is there no such thing as investment skill? Does experience count for nothing? We will leave you to decide since you can probably guess what our experience shows, and, consequently, where our opinion lies.