3
Spain: The end of two-party dominance

Spain: The end of two-party dominance

Like several other states, it has seen the rise of a large populist movement but in the Spanish case it is normally regarded as left wing. The anti-austerity and anti-establishment Podemos (We Can) movement grew out of the indignados (the indignant ones) protest movement. Pablo Iglesias, the Podemos leader, has softened his line on the EU from calling for a Spanish withdrawal from the euro-zone a few years ago, to arguing more recently for reforms and a move away from austerity. He lamented the result of the Brexit referendum in the UK.

Spain’s centre-left Partido Socialista Obrero Español (PSOE) has also declined from a leading position in the 1980s to a deeply divided party today. It is currently wracked by bitter disputes over leadership and ideology. Meanwhile, the conservative Partido Popular (PP) is embroiled in corruption scandals.

It should also be remembered that Spanish democracy is relatively young compared with many other European states. From 1939 until 1975 it was ruled by a military dictatorship. General Francisco Franco became head of state after three years of bloody civil war and held the office until his death.

It was not until 40 years ago on 15 June 1977 that over 18m people, representing nearly 80% of the electorate, took part in Spain’s first democratic election since 1936. The election was a key milestone for la transición, the period that saw the restoration of democracy.

Two general elections later, the 1982 landslide victory of the PSOE led by Felipe González marked the beginning of three decades of bipartisan hegemony, during which the socialist PSOE and the conservative PP took turns in governing the country at times with support from Basque and Catalan nationalists and other smaller parties.

Roberto Blanco Valdés, professor of constitutional law at the University of Santiago de Compostela, describes the period between the 1982 and the 2015 general elections as one of great political stability and profound social economic and cultural change. “There have been problems the most important being political corruption. But in general Spain enjoyed many years of political stability and growth. However, the 2008 crisis triggered a fundamental change to the party system,” Blanco says.

After a period of rapid growth, Spain’s economy was severely hit by the 2007-08 financial crisis followed by a deep recession and astronomically high unemployment rates that hit a record 26% in 2013; it now stands at just over 18%. 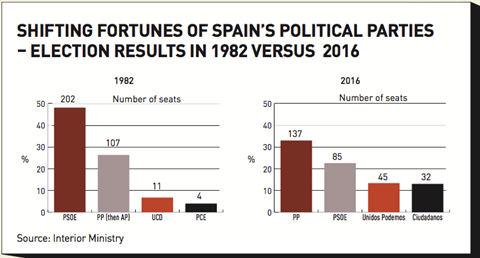 In 2010, president José Luís Rodríguez Zapatero (PSOE) introduced the first package of austerity measures including cuts to civil service pay and public spending. As the crisis deepened, anti-austerity protesters took to the streets. The so-called indignados or 15M movement eventually led to the creation of Podemos.

It was at this point that the disconnection between young voters and the traditional parties became clear, with both PP and PSOE losing support. According to polling organisation Metroscopia, while 52% of young voters were inclined to vote for either party between 2004 and 2010 only 26% were prepared to do so between 2011 and 2017.

PP won an absolute majority in the December 2011 election, securing a record number of 186 seats.

Three years later Podemos had its first electoral triumph, attracting nearly 8% of the vote at the European elections. Party leader Pablo Iglesias described their success as “the beginning of the end of bipartisanship”. Consequent elections have proved him right, so far.

As new cases of corruption made headlines and austerity continued, people’s distrust of what Iglesias refers to as la casta, or political establishment, got stronger. As a result, the December 2015 general election brought about the most fragmented parliament in Spain’s recent history. The impossibility of forming a coalition government led to second general election in June 2016, producing a similarly fragmented picture: 137 seats for PP, 85 for PSOE, 45 for Unidos Podemos – the merger between Podemos and Izquierda Unida (the United Left) –and 32 seats for Ciudadanos, the centrist party that has lured centre-right voters disenchanted with corruption.

The rise of both Podemos and Ciudadanos has changed Spain’s political landscape but the main threat to the future of both PP and PSOE are their own internal problems. If PP does not find a way to resolve its corruption problem effectively, Ciudadanos will find room to grow.

The future of PSOE, however, remains one the main sources of political uncertainty in the country. The deeply divided party is currently immersed in a bitter primary campaign to choose a new leader.

“The crisis within the PSOE is profound and it is not just about leadership but also about ideology. Whoever becomes leader would find it very difficult to bring the party together,” says Blanco. If PSOE is not able to resolve its internal problems soon, Podemos, alongside all its different regional ‘brands’ that currently hold parliamentary seats, could become the second-largest political party.

The other main factor threatening political stability is the question of regional independence for Catalonia. Although Rajoy’s government will block any attempt to celebrate a legally-binding independence referendum, the Catalan government remains firm in its plans to hold a vote this year.