This summer Standard & Poor’s Ratings Services announced that China now has more outstanding corporate debt than any other country, having surpassed the US – and it got there a year sooner than the agency expected.

The agency estimates corporate debt in China was at $14.2trn at the end of 2013, compared with $13.1trn in the US. The agency stated: “We expect that through the end of 2018, the debt needs of China, with its comparatively high nominal GDP growth, will reach $20trn – a full one-third of the almost $60trn in global refinancing and new debt needed.”

Institutional investors are understandably fearful of this level of indebtedness, worried that there is a potential for the global financial system to be sucked into, and crushed, by this economic black hole.

“China is the most controversial topic I talk about today and undoubtedly faces real challenges as China rebalances its economy,” says Claire Peck, a client portfolio manager at JPMorgan Asset Management.

• While China’s overall debt remains lower than that of the US or the euro-zone, the pace of growth has been notable – and corporate debt is now the world’s highest.
• Lending through both traditional and shadow banking routes took off since 2008.
• The authorities have clamped down on off-balance-sheet wealth management products that targeted SOEs, which has pushed lending into smaller, riskier private companies.
• With slowing growth, defaults are occurring – and could spread through China’s banking system.
• A more open system could make it difficult for the authorities to control the fallout in future.
• The long-term solution is continued growth, which will come only from a rebalancing of China’s massive economy.

“In terms of total leverage in the economy, the most common measure is GDP and at the end of 2013 the total debt was 220%,” he notes. “So, at absolute levels, China’s total debt is lower than that of the US and the euro-zone.”

Even so, he expresses concern at the level of corporate debt – 130% of GDP and growing.

Systemic
The Chinese debt burden started to build up during the financial crisis, explains Miranda Carr, head of research at North Square Blue Oak (NSBO), the London-headquartered specialist investment bank focused on China. She adds that the debt doubled from 2008 to 2009 and continued at that level over the following years.

Loans in China were made through a number of routes, both traditional and those that fell into the ‘shadow banking’ category. State-owned banks, joint stock banks, trust companies and regional trust companies were all lending over a number of years to drive the Chinese economy forward. Often, money was lent irrespective of whether or not there was a chance of it being repaid.

“A lot of loans were made out to companies with relatively weak credit metrics, if you don’t account for government support,” says Kim Eng Tan, senior director and analytical manager for Asia-Pacific sovereign ratings at Standard & Poor’s. “Many were embarking on projects that appear unlikely to repay the debt incurred to finance them.”

The cash behind the lending often came from Chinese investors who invested in off-book wealth management products (WMPs) that funded the infrastructure projects and the property developments that fuelled growth in the country. However, in 2012 Xiao Gang, the chairman of the board of the Bank of China, described these products in the English language China Daily as little better than Ponzi schemes, in a rare official acknowledgement of the potential risks that they posed to the Chinese banking system.

The result was that the Chinese government began tightening its control of the lending business.  Carr explains: “There has been a succession of regulations to try and limit wealth management products that were the route through which the money was raised.”

The Chinese government has progressively tightened up the offering of WMPs. “They have to bring them on balance sheet and limit what trust companies can invest in,” Carr explains. 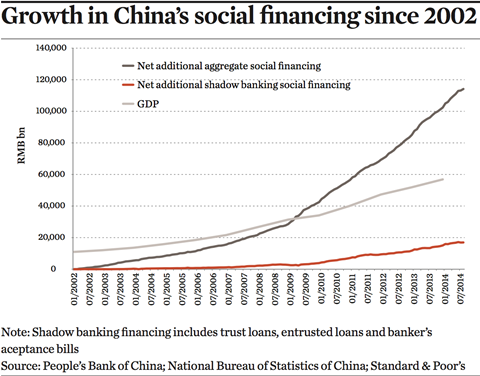 This shift – beneficial in that the state-owned banks were criticised for only lending to state-owned enterprises, starving the private sector of capital – has caused its own problems. As Carr points out, the brave new world of more informal financing for smaller and private companies has led to potentially higher risk.

“Now they are trying to limit the shadow banking side without increasing the money supply,” she says. The consequence is that, with a general slowing down of the economy – particularly in the steel, property and coal sectors – defaults are occurring.

“In terms of how that plays out, it means that smaller defaults are happening which aren’t reported,” she explains. “The ones that have been publicised have been solved.”

Credit costs arising from the sharp increase in lending in recent years have to be paid for, agrees Tan. “If it is done through defaults by the borrowing entities, that loss could be transferred to the banking system, rather than being absorbed by the government.”

Jonathan Fenby, head of China research at emerging markets analyst firm Trusted Sources, believes there is a cause for concern about widespread systemic risk for investors. “Not so much because of the risk of the debt level to individual investors as such, but because of systemic impact through the financial system and on private business,” he says.

Savings
Tan believes that, ultimately, the central government will allow local government to support many of these companies either through direct fund injections, or indirect support through preferential policy treatment.

And neither Carr nor Tan fears an immediate meltdown scenario for China, although over the  longer term events might prove more challenging.

“One of the key things that has protected China during previous financial crises is the closed capital account,” Carr says. “They can print as much money as they want; capital can’t leave the country and everything is state owned. But that’s breaking down. If you have a situation where people are taking money out of property or overseas then you will see capital flight on a more pronounced level or the government will try to re-stimulate the economy – and it won’t work.”

Tan believes that it’s the strength of the domestic savings market that has kept China safe, and that the large stock of domestic savings is still capable of sustaining the current level of debt. “Despite the increased volatility and uncertainty of recent years in the domestic financial sector, we have not seen funding costs rising very sharply in China because of the strong domestic savings,” he reasons.

Similarly, Peck at JPMAM does not agree with the “consensus” call for a banking crisis or real estate crash. “Primarily it’s a cash market underpinned by urbanisation trends,” she insists. “As for the banks, investors shouldn’t worry as, historically, no country with a current account surplus and extensive foreign exchange reserves has ever had a crisis. There are legitimate concerns around shadow banking and over-lending in 2009, but they are not overly material, given the strong balance sheets of the banks in terms of liquidity, capital and provisioning, so we think the sector is less risky than the general sentiment reflects.”

Carr adds that the government is happy to make changes but does not want to cause systemic risk while doing so.

“It’s the second largest economy in the world,” she observes. “You can’t turn a tanker around all of a sudden but specifically what Premier Li has said is that they would avoid systemic risk. If any of the defaults were to cause a crash they would step in, but would allow smaller ones to happen.”

Still, Fenby warns that the way the authorities manage reduction in debt exposure must be watched.

“This is part of the growth-reform relationship which will be the framing factor for the economy for the years ahead,” he says. “China needs growth, but without reform and action on the debt front it will be a less attractive investment destination.”

Tan agrees, and points out the importance of China’s big economic imbalances: around 40% of GDP in 2007 was in real investment such as in buildings, and inventories; by 2013, rather than coming down to more ‘normal’ levels, it had risen close to 50%.

“A large economy can sustain investment at such high rates only for a limited period of time,” he says. “An investment rate of about 30% is more commonly seen in other developing economies. For China to come down to that level means that consumption needs to play a bigger role and we are not seeing that yet. We need the rebalancing story to be successful or you won’t see the level of long-term growth that will address the risk in the financial system smoothly.”

In addition some, like Yao at AXA IM, argue that as privatisation and reform remove the implicit state guarantees from SOEs, their budgeting processes will be more subject to the discipline of market forces.

The question may concern whether the authorities can push this agenda fast enough to get sufficient done before the next bout of volatility or severe economic weakness. As Carr puts it: “The government has sufficient control of the economy to prevent a crash at the moment, but looking forward to 2016-17, if it experiences a similar downturn to now, the whole liberalisation process might become a problem.”