The prospects for green energy

By Christopher WalkerTowards Net Zero: COP26 and Beyond

In his November 2020 paper Building a Private Finance System for Net Zero, former Bank of England governor Mark Carney says the net-zero transition is “creating the greatest commercial opportunity of our age”. Over the next three decades, the total required investment in the energy sector will be $3.5trn (£2.5trn) per year.”

This viewpoint is increasingly echoed by some of the largest asset managers. Christopher Ailman, CIO of the $318bn Californian teachers’ pension fund CalSTRS told TV channel CNBC recently that climate change “is a mega-trend that’s… going to be an alpha generator for the next 30 or 40 years”.

There has certainly been a surge in capital towards renewable energy over the past decade, but more is needed. The current global energy crisis – manifest in California’s endless blackouts, China’s power shortages and soaring energy prices in Europe – has alerted investors that closing coal or natural gas plants could lead to electricity shortages. Reliance on wind, solar and hydro power has proved unwieldy – due to energy-storage inadequacies. Additional new solutions are required.

“The future of investing is inextricably linked with the climate crisis,” says Stephen Brenninkmeijer, chair of the European Climate Foundation says. “It will be very much about technology plays.”

At its recent green energy conference, Mark Dooley, the head of Macquarie’s green investment group, summed up the new energy landscape in these terms: “Newer technologies require nimbleness, a bespoke response and, above all, a push to launch them and help them turn into mainstream technologies.”

Green hydrogen
Of the key emerging technologies, hydrogen is at the fore. A report by consultants Arup and the Global Infrastructure Investor Association (GIIA) lists eight different colour-coded kinds of hydrogen (see figure 1).

However, five of these, from black hydrogen to blue, are created by burning fossil fuels. Three use electrolysis to split water molecules into hydrogen and oxygen but only the process using renewable energy is labelled truly ‘green’ hydrogen.

The potential energy role of hydrogen is significant. The IEA’s paper Net Zero by 2050: A Roadmap for the Global Energy Sector, says that hydrogen “will extend to several parts of the energy sector and grow sixfold from today’s (dirty hydrogen) levels to meet 10% of total final energy consumption by 2050”. A report by the World Energy Council suggests it could be even greater, fulfilling up to 25% of global energy needs by 2050.

Huge investment in infrastructure is required to achieve transformation on this scale. The Hydrogen Council estimates that investment in the hydrogen value chain will exceed $300bn by 2030 and hit $15trn by 2050.

Hydrogen piping networks will be a large chunk of this investment, enabling enormous quantities of energy to be stored and piped to where it is needed. But as the Arup report notes: “Hydrogen touches a range of sectors that have traditionally operated as silos – energy, transport, industry. This highlights hydrogen’s potential for ‘sector-coupling’.”

This revolution is likely to reach almost every corner of the global economy. For fossil fuel-intensive industrial processes such as steel and cement, hydrogen is the preferred solution. Others include refineries, chemical and fertiliser production. Other applications are in aviation, locomotive, and maritime fuels as battery options are limited. The potential CO₂ reductions are considerable (figure 2)

Yet the scale of capital required is gargantuan and as Deloitte notes in a November 2020 report, there are many obstacles to attracting private capital. It calls for a “more co-ordinated approach across government and business” to provide greater certainty over returns. Deloitte argues that the key is to reduce costs through publicly funded incentives, as with the wider renewable sectors. Others, like law firm Baker McKenzie, refer to the role of government in backing research and improving regulation. 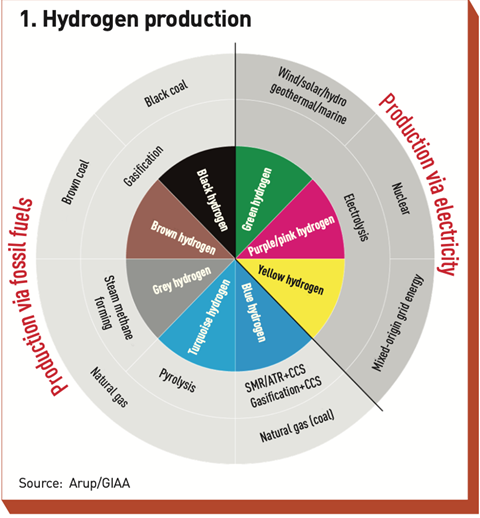 Kevin Chin, CEO of Arowana, an impact and renewables investment manager, and executive chairman of sustainable-energy firm VivoPower, agrees with this. “What’s needed is government action in the same way that governments created the solar industry through well-targeted subsidies. We need green hydrogen to be developed with generous tax credits and offsets, [and] capex and opex incentives to boost cash flow,” he says.

Harry Boyle, portfolio specialist in energy and infrastructure at the London-based sustainability specialist Impax Asset Management, points out that the cost of producing hydrogen is “something like $5 a kilo at present but it needs to fall to between $1.50 and $2 per kilo for hydrogen to be an attractive investment opportunity”.

This will happen by the late 2020s, Boyle believes. “Hydrogen is probably the area which has the most potential over the next 10 years [but] the opportunities are not there over the next one to two years.”

Capital is coming
Governments are starting to take action. The EU introduced a co-ordinated hydrogen policy in 2020, and the massive US infrastructure deal being debated in Congress includes generous production and investment incentives for clean hydrogen. The UK’s inaugural hydrogen strategy was announced last month.

Boyle feels that government action so far has not been significant enough and calls the UK fund “undersized”. There has also been an apparent reluctance for private capital to get involved, until recently.

In October, Ardian and FiveT Hydrogen launched Hy24, the world’s largest investment platform focused on clean hydrogen infrastructure. Pierre-Etienne Franc, Hy24’s CEO, says: “This is a tipping point. While we welcome government commitments, which have now reached $76bn worldwide, with this initiative we are seeing significant private investment capital being committed for the first time.”

He points to Hy24’s significant list of large companies that have provided half of the target capital raise of €1.5bn, including Air Liquide, Total and Vinci. Franc says he has been overwhelmed by investor enthusiasm in pre-marketing discussions. “Appetite is strong,” he says.

Hy24 CIO Amir Sharifi adds: “We see this as the moment which solves the ‘chicken and egg’ problem of investing in hydrogen, and we will help kick off the whole hydrogen investment ecosystem.” Hy24 splits its investments into upstream hydrogen infrastructure and production, and downstream transportation.

Others are investing in transportation. For Chin there are opportunities in hydrogen solutions for heavy industries where battery options are absent, such as mining. Global mining solutions provider GHH Group has announced plans to purchase 3,000 electric light-vehicle conversion kits from Vivo Power subsidiary Tembo over the next five years.

Likewise, Dutch logistics provider NPRC announced this year that it is working with Covestro to convert the enormous salt transport fleet on the Rhine to hydrogen.

Gianluca Minella, head of infrastructure research at DWS, thinks about 17% of emissions in the transport sector could be removed by hydrogen and has published a hydrogen-competitiveness timeline (figure 3).

Chemical refining and transportation are in the lead on the timeline. But other sectors are developing faster than anticipated. There are signs of innovation in hydrogen industrial applications such as in the steel industry, which is responsible for 8% of global emissions and heavily reliant on coking coal. In August, Hybrit, a Swedish consortium, sold the world’s first green steel made with hydrogen.

It is not just hydrogen
Hy24 is not just looking at the production of green hydrogen, but also blue hydrogen produced by ‘scrubbing’ carbon-capture technology, and pink hydrogen from the nuclear industry.

Blue hydrogen is not considered sufficiently green by some and Dutch sustainable asset manager Triodos refused to back the UK’s recent green bond issuance as it did not meet “strict criteria for green bond eligibility because it will finance investments in blue hydrogen and carbon capture and storage (CCS)”. Franc feels this is unfair, saying “the only thing that matters is the CO₂ output. We need strict analysis of the whole process”. The new Hy24 fund seeks to do this and is targeting article 9 compliance under the EU’s Sustainable Finance Disclosure Regulation.

CCS technology is advancing rapidly, and it would be wrong to think of it simply as ‘greenwashing’ on the part of unscrupulous companies. Macquarie is investing in the Acorn project, which will take carbon from a new power station in London and store it in old North Sea oil and gas fields. 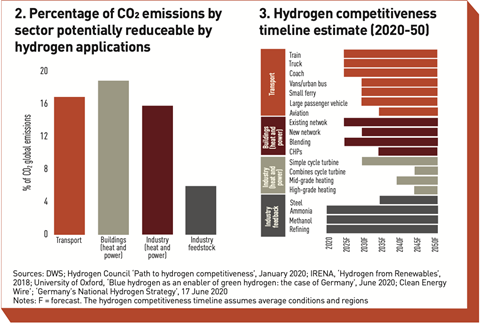 Nick Cooper, CEO of Storegga, the lead developer of the project, says “CCS is no longer on the periphery”, adding that “the North Sea has about 20% of Europe’s CCS storage potential; a heck of a lot of storage to do a heck of a lot of good in a reverse carbon cycle.” He adds that it is also important to pursue “carbon negative technologies that suck CO₂ straight form the atmosphere”.

There has been considerable focus on battery technology and energy storage, where much of the technology would seem to be in place and there is less dependency on further government action. Macquarie and Impax have made a series of investments, such as LG Chem, Samsung, and Lim Battery holdings.

According to a Mordor Intelligence, the global electric-vehicle battery market is expected to reach $166bn in 2026, from $34bn last year. Some of the largest companies are investing in the sector – last month Toyota announced a $13.6bn investment in battery technology over the next decade.

We are approaching the crucial cost tipping point where electric vehicles become cheaper than petrol cars. The price of lithium-ion batteries is key, and in the past decade this has fallen by an impressive 90%. McKinsey’s January 2021 Global Energy Perspective predicted that “electric vehicles are likely to become the most economic choice in the next five years in many parts of the world”.

There is another point further out where hydrogen technology advances to the point where it has applications in the mass vehicle market, rather than just large commercial vehicles. Kevin Chin of Arwana says: “Our opinion is that the next seven to 10 years will see rapid growth in battery electric vehicles (BEVs), but thereafter green hydrogen fuel cell electric vehicles will take over the growth mantle as infrastructure and production achieves a critical mass.”

Return of an old favourite – nuclear
Apart from blue and green hydrogen, pink hydrogen derived from nuclear power is of most interest to investors such as Hy24. Nuclear power has been out of favour with investors as an industry that was meant to provide power ‘too cheap to meter’ and ended up being one that was ‘too expensive to build’. Disasters such as Fukushima led to adverse public reaction, and to Germany withdrawing from the nuclear industry.

Stephen Brenninkmeijer, chair of the European Climate Foundation, sees Germany’s withdrawal as precipitous: “I believe Europe must include nuclear power in its future energy plans,” he says. “Nuclear technology has advanced hugely and the costs of construction are considerably reduced.”

IP3, a US-based nuclear technology company, has reportedly been sounding out pension funds and investors about a multi-billion-pound fund to invest in small nuclear infrastructure.

IP3 CEO Mike Hewitt has spoken of plans to roll out the technology by eastern European governments, and suggests UK manufacturer Rolls Royce is “uniquely positioned”.

For its part, Rolls Royce states its SMR technology “solves the conundrum of how to create affordable energy, and more of it, with a lower carbon footprint”.

Bubbles are not to be discounted. US and Canadian-listed Sprott Physical Uranium Trust started amassing uranium reportedly equal to about 16% of the annual consumption from the world’s nuclear reactors. The fund increased its target size to $1.3bn (€1.1bn) from $300m, although in September and October there were large movements in the spot price for uranium.