Investing in private markets is second nature to Danish labour-market pension fund Industriens Pension, with the fund having bought its first unlisted assets two decades ago.

The fund’s work with private markets has been under the leadership of Jan Østergaard from the beginning. Since an organisational change five years ago, his title has been deputy director and head of private investments at the Copenhagen-based operation.

“The first private equity commitment we made was in 2000, at a time when the pension fund was still quite small, having only been set up in 1993,” Østergaard says.

At that time, a priority for the fund was increasing the number of asset classes in its expanding portfolio. “The IT crisis made us pause for a year or two, but from 2003 onwards, we have increased our private investments exposure continuously,” says Østergaard, who first came to the pension fund back in 1998.

Today, Industriens Pension’s private-markets assets account for about 30% of its total assets under management. The two main types are private equity, with an 11% slice of the portfolio, and infrastructure,  which makes up nearly 10% of all assets.

All private-equity investment is done via funds rather than directly-held assets, and value-add and opportunistic infrastructure and real estate is also held via funds.

However, Industriens Pension does not currently take the co-investment route for private equity.

“We are considering that and my guess is we would start co-investing in private equity at some point, but that is a question for our board,” Østergaard says.

In the two asset classes of core real estate and core infrastructure, exposures are all gained directly, rather than via funds.

While annual return expectations for the value-add and opportunistic infrastructure and real estate investments Industriens Pension makes via funds are typically more than 10%, the expectations for core exposures to these real assets tend to be 5% and above annually on a 10-year horizon.

“These direct investments are typically brownfield investments, existing assets generating a stable, inflation-hedged return, and that is really the purpose of these core investments – to take the place of some of our Gilt-edged and mortgage bonds,” Østergaard says.

Existing residential and office buildings are typical targets for Industriens Pension in its hunt for core real estate, according to Østergaard, although he says developments could also be an option.

“Of course, with these direct investments we have the illiquidity risk, but we can take this stance as we remain in the asset class for so long. These two asset classes in the core space have a six or seven-year history now, and I would expect those two to grow in relation to both total assets and total private assets,” he says.

The portfolio shift away from Gilts and mortgage bonds and towards core infrastructure and real estate that Industriens Pension has been undergoing in the past few years is to continue for some time to come. 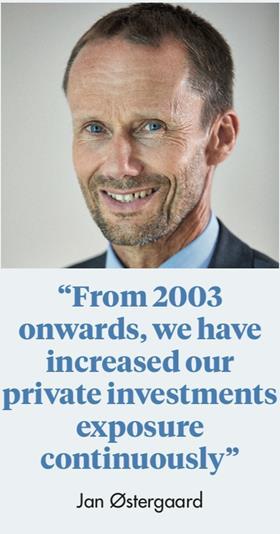 Alongside this trend, there has been a move towards low-risk as well as high-risk private credit via funds, with these unlisted debt assets gradually replacing the pension fund’s exposure to credit bonds – another portfolio change that Østergaard says has further to go.

With its 30% private assets allocation, Østergaard says Industriens Pension’s unlisted asset weighting is roughly on the same level as several of its peers, with the majority of Danish pension funds moving in the same direction.

Looking ahead, he says the allocation could rise to 35%, although he says achieving that would take several years – especially in the case of core assets.

Part of Industriens Pension’s ESG strategy for its entire portfolio, including listed assets, is that, all other things being equal, the pension fund will always choose the green alternative.

“In our infrastructure holdings we have quite a lot in sustainable investments, and I’m sure we will continue with that; the proportion of green investments will increase.

“If you look back, there have been a number of large investments which have been particularly successful,” Østergaard continues, mentioning in particular several emerging markets solar and wind energy investments held via co-investments in funds run by Actis among others, that Industriens Pension entered into between 2012 and 2015.

These produced a 100% return for the pension fund, he says, and the underlying investments were realised after three years.

With these investments – as with all its infrastructure fund investments – finding the right management is key, and Østergaard says his team is mindful that general partners at private funds can come and go.

“We’ve done a lot of re-ups [new rounds of investment] with the same GPs, but it’s not something we do automatically,” he says, estimating that 70-80% of investments are commitments to funds Industriens Pension has already used before.

“The new additions have helped create a new way of thinking for all of us, as they come with a lot of experience from different areas,” he says.

Even so, it can take a long time to hire experts in private-market investments because few have the right skills. Østergaard reveals the pension fund is in the process of seeking out two more people to add to the team within the next year – both for direct investments in domestic real estate.