For those looking for contenders for currency risk, this year offers a smorgasbord of them –  trade wars, slowing growth in China and Europe, and the potential for shifting base rate differentials, just for starters.

How such different forces combine into a single vector is not easy to determine. As the Danish physicist Niels Bohr is reputed to have said, “it’s difficult to make predictions, especially about the future”. But if the old cliché that markets hate uncertainty is correct, then forex markets hate it. How, then, are pension funds responding to these threats?

A fund can choose to have its exposure unhedged, but this is fraught with risk. “Generally, currency risk is one that has no reward, especially with regard to developed market currencies,” says Frank Vinke, senior strategist at Dutch pension fund PGGM: “So hedging out this risk can help the quality of the portfolio.”

For those that choose to hedge, the question is whether to go passive or active. “Pension funds have developed a better understanding of how, and why, to manage currency risk,” says Sebastian Schulze, director at consultancy Redington: “The question for investors is, do you want to treat currency as a distinct asset class or to control risk exposure?”

The passive route entails fixing a percentage of the currency risk you want to hedge out and sticking to it. So if you have a portfolio of US corporate bonds hedged back into euros as 100%, you get the credit risk, but not the currency risk. Active management, on the other hand, involves changing the level of the hedge to take advantage of currency movements. 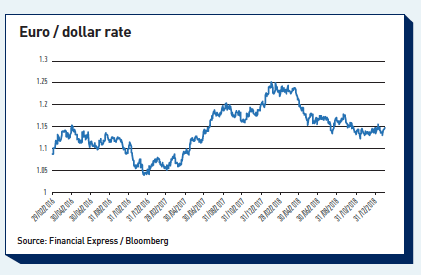 Given that downside risk is rising, it is perhaps intuitive that hedging strategies to mitigate, or even take advantage of these would be on the rise. Not so, says Schulze: “We haven’t seen much change in the balance between active and passive mandates.”

Some pension funds have simplified matters – and reduced management fees – by going entirely passive. “We stopped active currency management three years ago, following a review of all components of the scheme’s portfolio,” says Rob Schreur, CIO of the UK’s National Grid Pension Scheme. He explains that the scheme was not convinced that active currency managers could consistently add value after fees. He added that “the mandate itself was basically a bet on the US dollar, because that was our main foreign exposure. So if you get the dollar wrong, getting the Swiss franc right isn’t going to help you.”

Schreur reckons that going passive has saved the scheme about 20bps on the relevant section of the portfolio, or about £4m (€4.6m) a year.

For most pension funds, says Schultze, the impact on returns from active management probably does not justify the additional expense in terms of the governance needed to set up and monitor such a mandate, and the additional management fees.

This need for simple governance is an important driver. PGGM starts from the principle of hedging out all currency risk, says Vinke, but warns that “in practice that can lead to greater complexity – so, for example, we don’t hedge minor currencies such as the Danish krona”.

In addition, he explains, it can pay to not fully hedge safe-haven currencies such as the dollar, yen and Swiss franc: “For example, if the US stock market goes down, the dollar tends to strengthen. That helps you as an investor, and the risk/return profile of the portfolio is improved by not having a 100% hedge. Instead, we might typically hedge to 70%.”

If investors do wish to undertake active currency management, “it’s more efficient to take exposure to it through funds that access currencies as part of a wider set of return sources”, says Schulze. He adds: “Pension funds need to outsource to those with the right skills and the ability to move quickly.”

Cengiz Temel, head of currency overlay at Swiss-based currency manager Qcam, says the firm is seeing a trend towards such active strategies, particularly among German and Swiss pension funds, prompted by two factors – increasing uncertainty, and rising hedging costs, especially from the dollar to euro. “The latter can be up to 3%, so this really hurts returns.”

He says: “Investors can respond to this in two ways: by seeking out dollar investments with a higher return to compensate, but this comes with increased risk. So investors are also looking at whether active currency strategies are a way of addressing this.”

This can be done through determining a target hedge ratio, such as 100%, along with bands with which to manage this exposure – for instance, 0-20%, 50-100% or any other combination – the wider the band width, the less risk averse the investor is typically.

“We stopped active currency management three years ago, following a review of all components of the scheme’s portfolio” - Rob Schreur

“We use a portfolio of different predictive models, capturing factors such as sentiment, macro and momentum, resulting in one blended signal,” says Temel: “Assuming a midpoint of 100% hedge, if the model says long dollar, we reduce the hedge ratio to below 100%; if it says short, we increase it above this level.”

It is instructive to look at how investors on both sides of the trade  view Brexit, as it is representative of how to approach one-off events. Schulze says that Brexit “doesn’t require a whole active-management strategy and is just a different take on a well-known risk”, and can be managed through widely used hedging instruments, such as FX forwards.

Schreur says that National Grid first runs stress tests to see what the portfolio impact would be. “Then, we look at potential mitigants, such as option strategies. One can choose to hedge more or less of the portfolio, but that in itself leaves you badly positioned if the opposite happens.”

Options do not come for free, he cautions: “If we put an option on to the end of March, and Brexit is then delayed, we have just lost money for nothing”. So, in the case of Brexit, having considered the use of options, the National Grid trustees “felt the portfolio could withstand a hard-Brexit scenario, and that we would monitor the situation on an ongoing basis”, he says

This is in line with Vinke’s observation that PGGM’s customers are reluctant to change policy over one specific event, and that their hedge ratio to sterling is 100%. Given that the cost of hedging to sterling remains low, and PGGM’s UK exposure is a couple of per cent, this is “typically not something worth actively steering”, he says.

Indeed, Temel concedes that an active approach might not be suitable for such situations, as “Brexit is a very difficult situation to predict: you don’t know how politicians will react”, and says that unless clients have a precise opinion about its outcome, “it’s difficult to hedge appropriately via an active overlay, hence we propose to focus there on a passive approach