The importance of sustainable investments is steadily increasing. At the same time, the debate surrounding the added value of this investment approach continues. While the advocates of a sustainable investment strategy point out that they generate outperformance, critics of this approach argue the opposite. A meta-study by the Stockholm School of Economics concludes that the available data does not provide a clear answer. However, an analysis comparing the current difference in returns generated by various socially responsible investing (SRI) ETFs relative to their respective parent indices provides a clearer conclusion.

According to the figures presented in the Global Sustainable Investment Review, a total of $21.4trn (€17.7trn) was invested in strategies pursuing an SRI approach as of the end of 2014. Europe leads the way with a total of $13trn, followed by US investors, who hold assets in this category worth $6.5trn (see figure 1, panel A). With regard to the implementation of SRI investments, it is clear that investors prefer the negative screening approach. This means that at present, most SRI investments are managed according to the principles of a) exclusion criteria, b) best in class and c) minimum value (minimum rating). As panel B in figure 1 reveals, investors’ preferences remain unchanged over time when measured by the proportion of assets under management for each strategy.

While global SRI assets are based on a universe which contains both listed and unlisted investments, the European data in figure 2 is based exclusively on assets in collectively managed investment vehicles – ie, in investment forms that are generally open to a wide range of investment clients. This makes clear that investment concepts taking account of SRI principles are also gaining greatly in popularity outside the framework of purely institutional funds. At 25%, growth rates here are now well into double-digit territory.

The SRI-based investment approach has changed considerably over time. In particular, while certain assets were initially strictly excluded, today there are several multi-layered screening models at the centre of the SRI selection process. What has remained important is that the fundamental approach adopted by SRI portfolios takes specific account of those firms (in the form of securities) that stand out thanks to their sustainability as well as social and corporate responsibility profiles. The selection process is conducted on the basis of so-called ESG criteria (environment, social justice and corporate governance), which play a decisive role when making investment decisions (inclusion and weighting). Companies that fail to satisfy the ethical, environmental and social criteria are excluded. 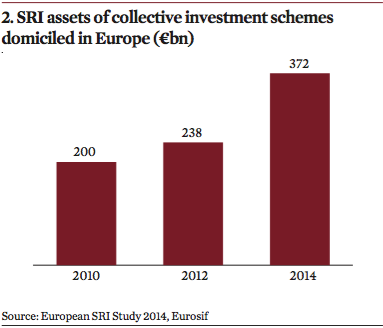 Critics of this approach usually point out that such a selection has two substantial disadvantages: first, a significant reduction in investment and thus a lack of diversification opportunities leads to low relative returns. Second, the time-consuming ESG-based selection process results in higher costs, further weighing on returns. Yet a meta-study by the Stockholm School of Economics1 analyses the results of the 21 most recent studies on the returns of SRI portfolios and comes to the conclusion that SRI investments actually generate  slightly higher returns relative to comparable traditional investments.

Very few additional costs with SRI-based ETFs
Investments with an SRI focus can now be made simply and directly with instruments such as ETFs. Here, passively managed ETFs differ from traditional SRI investment funds, with ETFs tracking a corresponding SRI index. For example, the MSCI SRI indices incorporate those companies that may have relatively high ESG values measured according to the relevant sector. This corresponds to the best in class idea and ensures that the sector distribution is not excessively distorted. This can be viewed as a response to the aforementioned diversification criticism levelled at SRI investments and shows that previous objections have been addressed. Accordingly, the amounts invested in SRI ETFs have increased steadily and after just a few years stand at around CHF1.3bn (€1.2bn – most European SRI ETFs were launched prior to the end of 2011, see figures 3 and 4).

One reason for the rapidly increasing demand for SRI ETFs may lie in the fact that the cost concerns highlighted by critics have little impact on ETFs. On average, SRI ETF investments have an annual total expense ratio of around 40bps, and hence the return impact argument is seems to be limited (see figure 5).

Are SRI investments the better investment class?
The criticism of higher costs based on the SRI selection procedure has repeatedly led to the claim that the corresponding investments forfeit returns relative to conventional investments. The response to this question should be provided in the form of a comparison of the absolute and risk-adjusted returns of traditional and SRI-focused investments. The performance analysis shows, however, that SRI portfolios by no means generate a weaker performance and thus disproves this claim. Since September 2007, SRI investments have outperformed traditional portfolios on a cumulative basis across regions (see figure 6). 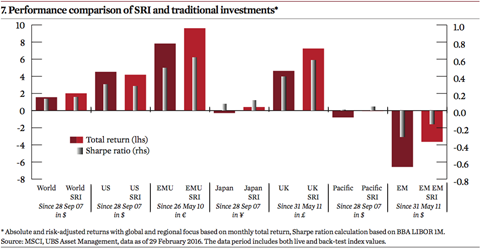 The results indicate that investors using SRI ETFs generated a superior return than those using traditional market cap ETFs. This not only applies on an absolute basis, but also when the returns are adjusted for risks (see figure 7).

As regards the active deviation risk, SRI portfolios also only have minor deviations. The comparison in figure 8 illustrates that SRI portfolios rarely enter into active weighting bets. This makes clear that the measured outperformance relative to traditional portfolios is not based on a different sector allocation. The data shows that the largest deviations are very marginal and fall within the range of plus 3% for IT stocks and minus 3% for energy stocks.

Results from recent years appear to support the SRI proponents. This is shown on the one hand by the notable increase in SRI ETF assets, which has accelerated in particular since September 2014. The relative Sharpe ratios – the difference between the SRI Sharpe ratio and the traditional portfolio – have also been very consistently in favour of the SRI portfolios. This indicates that SRI ETFs consistently provide added value on a risk-adjusted basis (figure 9). 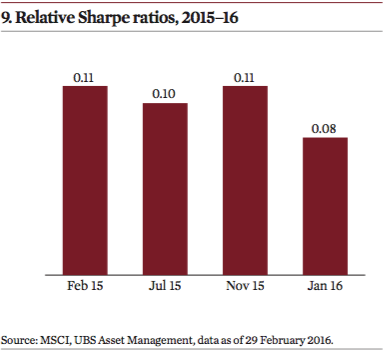 Although the comparisons only allow for a cautious conclusion due to the limited data history, the different periods and the broad geographic basis, there is much that suggests that a focus on companies which operate in a particularly social and/or environmentally friendly manner relative to their competitors ultimately pays off in all investment regions in the form of (even if only moderate) outperformance. The performance comparison is very interesting in the sense that across all of the tested investment universes, it disproves the argument of additional costs levelled by SRI detractors (recall figure 6). Provided the investments are made in a cost-conscious and systematic manner, concerns regarding sustainable investments appear unfounded. Rising investment volumes in this area show that investors are also increasingly becoming aware of the merits of socially responsible investing.