Despite reports that sovereign wealth funds are cashing in their assets to cope with falling oil prices, Daniel Ben-Ami finds by most measures the sector is still growing

It has been widely reported that sovereign wealth funds (SWFs) are pulling billions of euros out of asset management groups as a result of falling commodity prices. To many observers, the claim probably conjures up an image of oil-rich SWFs having to cash in their assets to help pay the cost of troubled economic times.

There is certainly evidence to support such a claim. In July the price of a barrel of crude oil (West Texas Intermediate) was hovering at about $45, compared with over $100 for much of August 2014. Admittedly the most recent figure is significantly up on the low of $26 reached in January 2016.

Economic difficulties are also apparent in the oil-rich states of the Arabian Gulf. Saudi Arabia, for example, had a budget deficit of 13% of GDP in 2015 according to the US Central Intelligence Agency (CIA). Indeed Qatar was the only state of the Gulf Cooperation Council to avoid a deficit in 2015 but even it looks set for one in 2016. Such countries have also started tapping the international bond markets for additional capital.

There is also direct evidence of substantial outflows from SWFs. For example, according to figures from eVestment, a specialist data company, SWFs withdrew a net $8.8bn (€8bn) from asset managers in the first quarter of 2016. Indeed, its figures show consecutive net outflows from the third quarter of 2014. However, the eVestment data does not reveal which funds are included in the survey, so it is hard to assess its validity.

The trend is also confirmed by some specialists in the field. Cyril Widdershoven, a Middle Eastern energy specialist, says SWFs “pulled out a hell of a lot [of assets] last year”.

Although the case for a large outflow of assets is plausible, there are reasons to question it. For one thing, it is contradicted by other data sources. According to Preqin, another specialist data vendor, assets under management (AUM) in SWFs rose steadily from about $3.2trn in 2009 to $6.5trn in March 2016. Although the rate of growth was slow in 2015, it was still on an upward trend.

The truth is that it is not possible to be certain about developments in SWFs as they retain a high degree of secrecy. Although they are generally more open than they were until a few years ago, the industry as a whole is still far from fully transparent. There is, therefore, no definitive set of figures enabling questions to be answered with absolute certainty.

Nevertheless, it is possible to make educated assessments of the trends within SWFs. There are specialists who are well-informed about the sector, even though full information is not available. Making clear distinctions about exactly what types of funds should be included in the universe also helps.

Perhaps the most obvious place to start is the difficulty of defining the sector. The problem is precisely that there is no universally accepted definition. There is considerable debate about which institutions should be included.

Not that there have not been attempts at definition. For instance, a 2008 European Central Bank working paper defined SWFs as “public investment agencies which manage part of the (foreign) assets of national states”. It went on to identify three common elements common to such funds: they are state-owned; they have no or only very limited explicit liabilities; and they are managed separately from official foreign exchange reserves. (Roland Beck and Michael Fidora, ‘The impact of sovereign wealth funds on global financial markets’. ECB Occasional Paper Series. July 2008). 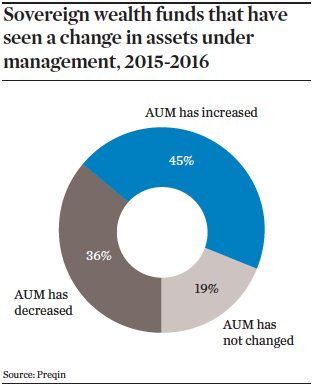 Patrick Thomson, the head of international institutional clients and global head of sovereigns at JP Morgan Asset Management, accepts that the “rate of growth of Middle Eastern sovereign wealth funds has slowed because of the weak oil price”. This is broadly in line with the Preqin figures that show a slight dip in AUM for SWFs associated with hydrocarbons in the 12 months to March 2016.

However, Thomson suspects the apparent fall some have observed is at least partly the result of including central banks – the managers of official foreign exchange reserves – within the SWF universe. For instance, Saudi Arabia’s foreign exchange reserves fell from $714bn in February 2015 to $587bn in March 2016, according to figures from the International Monetary Fund (IMF). Central banks are often not included as SWFs but when they are, in more inclusive definitions, it clearly has a substantial statistical impact.

Most of the best-known SWFs outside of this universe are in the emerging economies of East Asia. Their economies are generally more industrialised and diversified than those of the oil producers. As a result, their performance tends to be more influenced by currency movement than commodity prices. Flows into the funds are also not generally related to revenues from oil or other commodities.

Indeed, even the Arab states of the Persian Gulf are trying to broaden their economies to reduce their dependence on oil. For example, Saudi Arabia’s Vision 2030 programme explicitly aims at economic diversification. According to a statement on its website: “We are determined to reinforce and diversify the capabilities of our economy, turning our key strengths into enabling tools for a fully diversified future. As such, we will transform Aramco from an oil producing company into a global industrial conglomerate. We will transform the Public Investment Fund into the world’s largest sovereign wealth fund. We will encourage our major corporations to expand across borders and take their rightful place in global markets. As we continue to give our army the best possible machinery and equipment, we plan to manufacture half of our military needs within the Kingdom to create more job opportunities for citizens and keep more resources in our country.”

Cyril Widdershoven confirms this is the likely trend. He says Arab SWFs “will not be investing as much as they are in energy. They will be investing much more in defence”. This will include taking stakes in high-technology firms

However, Saudi Arabia, for instance, is still a long way away from achieving these grand ambitions. According to its entry in the CIA World Factbook: “The petroleum sector accounts for roughly 87% of budget revenues, 42% of GDP, and 90% of export earnings.”

Another important factor to consider is the growth of in-house management within SWFs. Even though such institutions are withdrawing some assets from commercial managers it does not necessarily follow that they are reducing their holdings in any particular asset class. It could be they are simply managing more money themselves. 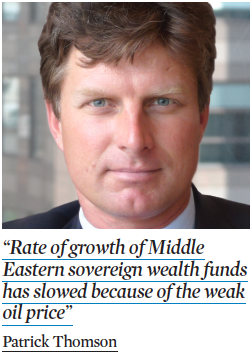 The topic was tackled in the 2015 edition of the annual Invesco Global Asset Management Study. The survey pointed to “a decade-long shift to developing in-house asset management capability”. Lower costs, enhanced risk management and opportunities to develop bespoke indexing strategies were among those factors identified as responsible for the shift. However, SWFs still saw external active management as playing an important role. External indexing, in contrast, was perceived as less important.

Alex Millar, the head of EMEA sovereigns, Middle East and Africa institutional sales at Invesco, says “the trend to internalisation seems to be continuing”. He points to factor investing as an exception, as this is still generally seen as within the province of external managers.

In any event, SWFs look set to continue their rise in importance over the coming years. In some respects, this could bring them into increased competition with mainstream pension funds. For instance, SWFs seem particularly attracted to prime buildings in core cities. That could push some pension funds to second-tier cities or outside of the prime real estate sectors. Competition in public markets, such as listed equities, is likely to be less pronounced.

There is also the possibility of competition for personnel. It can be hard for often under-resourced pension funds to compete with the resources available to SWFs. However, this effect could be mitigated by the location of many SWFs away from traditional financial centres.

“The trend to internalisation seems to be continuing”
Alex Millar

It should not be forgotten that, at least by some definition, many SWFs are themselves pension funds. The Central Provident Fund (CPF) in Singapore, Government Pension Fund (GPF) in Thailand, National Pension Service (NPS) in South Korea and the National Social Security Fund (NSSF) in China are among the best examples. Indeed, by the broadest definitions, the likes of the Canada Pension Plan Investment Board (CPPIB), the California Public Employees Retirement System (CalPERS) and Sweden’s AP4 could be classified as SWFs even though they do not define themselves in such terms.

It is likely that the claim that SWFs are withdrawing billions from asset managers is based on an over-simplification. It may be true if the universe is defined in a particular way, with a focus on oil producers and including central banks, but is probably not the case if looked at more broadly. SWFs look set to continue growing in importance over the coming years.