Many European asset managers commit to responsible investment but do not actively incorporate this into how they convey their identity, according to two Swiss brand consultancies.

Actual commitment, according to the index, was demonstrated through hard facts, such as committing to the UN-backed Principles for Responsible Investment, and “the intent that transpires from within asset managers through their brand, best visible in openly and transparently communicated vision and purpose statements”.

More than three-quarters (184) of the managers analysed formally commited as responsible investors, but most of these (147) “miss the opportunity to share their approach and actively incorporate it into their brand”, according to the index report.

“The common unifier for a successful position of both committing to ESG and reflecting this in the brand architecture is to clearly articulate and link an intrinsic, inner guiding purpose, connected to tangible social impact,” according to the index report.

Ten companies scored highly on branding but had a low commitment rating, which was interpreted as “their aspiration having not yet been translated into action”. 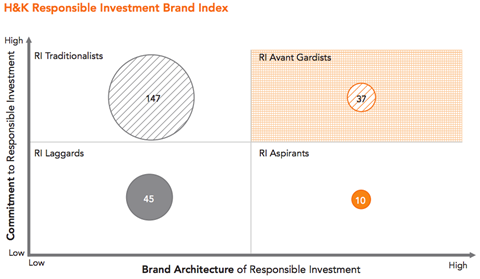 According to the index authors, asset managers should make “finding, articulating and communicating purpose a strategy priority”.

Markus Kramer, partner at Brand Affairs, said: “Especially in a world that is becoming increasingly transparent and competitive and where sustainability is on everyone’s lips, a clear definition of one’s own values and vision is the key to a successful responsible investment branding and long-term business success.”

Kramer developed the index with Jean-François Hirschel, founder and CEO of H-Ideas.

Size did not appear to have a significant bearing on asset managers’ ability to integrate responsible investment into its branding, according to the index. The 47 companies that achieved an above-average score were responsible for €211bn each on average, compared with €202bn for the total peer group average.

Geographical location did appear to have a major impact on index rankings, however. There were significantly more French businesses among the 47 best-practice companies than from other countries. Swiss and Benelux asset managers were also well represented, while German companies were strongly under-represented.

The index considered the extent to which sustainable development lies at the heart of a company’s identity.