Risk parity is useful as a framework for thinking about asset allocation but it has its pitfalls. As well as failing to take into account expectations of future returns, it does not directly address the issue of most concern to investors, namely tail risk – the risk of an extreme downside event widely seen as an important consideration.

One argument against risk parity is that it assumes normal distributions, while investors are concerned with losses. Many would welcome upside volatility if it implied higher returns. Risk parity relies on a simplistic view of asset-price distributions when all the evidence indicates asset price distributions have ‘fat tails’. Investors need to be wary of low-frequency/high-impact events otherwise known as ‘black swans’.

Managing tail risk effectively requires re-engineering the concepts of risk parity. The approaches to doing this can stray further and further away from what would be recognised as a risk parity framework.

But dealing with tail risks is critical for institutional investors. As Michael Mendelson, a principal at AQR Capital, points out, large short-term losses can prevent a portfolio from meeting its long-term return objectives. The danger comes not just from its effect on compounded returns but also from forcing asset allocation changes that may adversely impact long-term returns.

Volatility is a good measure of dispersion but it does not reveal anything about drawdowns. Michael DePalma, chief investment officer of AllianceBernstein’s Global Risk Allocation fund, says: “Volatility-based approaches such as risk parity do not address what investors really care about, which is losing money. By focusing only on tail risk, our contention is that investors can retain more of the upside.”

Risk is measured using the volatility of historical price movements in a traditional risk parity approach. Assets are equally weighted according to their volatility. AllianceBernstein’s approach bases risk not on such backward-looking measures but, instead, on what it refers to as ‘implied expected tail loss (ETL)’, a measure distilled from options-market information. It is essentially the implied volatility measured in out-of-the-money options.

Its argument is that this gives market estimates about the probability of catastrophic scenarios. For example, the ‘Goldilocks’ environment of 2006-07, when the economy seemed to be growing smoothly without generating high inflation, represented the calm before the storm.

In its simulations, AllianceBernstein’s tail-risk parity approach succeeded in reducing equity exposures, despite volatility being near record lows. It achieved this goal by registering very high levels of future equity-tail-loss risk based on information such as that contained in the equity option skew. As it argues, the skew was signalling the potential tail dangers stemming from excessive leverage. “Our research has shown that implied ETLs provide more accurate estimates of future realised drawdowns than methods that use historical returns only,” says DePalma.

• A weakness of the risk parity approach is that it fails to take into account extreme events.
• It is possible to measure the scale of possible tail risks by harnessing the options markets.
• A more radical approach is to assume the markets exist in radically different states.
• Investors can monitor market variables to gauge when a transition is likely.

Using options markets in this way gives market estimates of the likelihood of future catastrophic market falls. Tail-risk parity portfolios would be adjusted to reflect changes in these estimates through incorporating the information provided by the option markets. 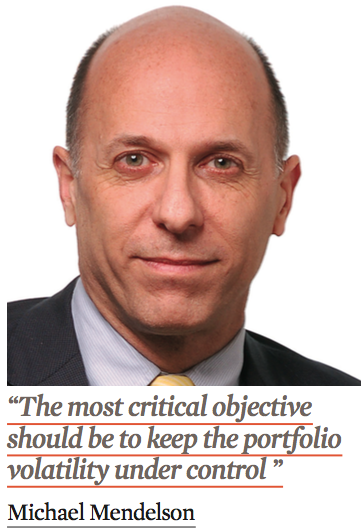 Edgar Peters, a partner at First Quadrant, says there is a more robust approach to tackling tail risk within a risk parity framework that is based on a radical premise. He sees the world as existing in two regimes – namely, either one of high uncertainty or one of low uncertainty. So tail risk can change over the market cycle and anchoring to the long-term standard deviation can overstate and understate actual risk.

Being the average is the exception rather than the rule, argues Peters. Complicating matters  further, the transition from one state to the other is not a stable point although it can estimate the conditions for such a transition to occur. This is achieved  through monitoring variables such as the VIX (the implied volatility of the S&P 500 index options) and other fundamental risks such as credit and monetary policy.

If there are two states for the world, then tail-risk hedging should also vary dramatically in the two states. In a world of low uncertainty, portfolios should invest heavily in high-growth assets and as implied volatilities of options will be low, options will be cheap and risk parity is not required. Hedging tail risk in portfolios would then be done most cheaply through option-based approaches such as purchasing out of the money put options. When there is a switch to a state of high uncertainty, risk parity can be applied which would increase exposure to bonds at the expense of growth assets.

AQR, also a pioneer of risk parity, has a different take. As Mendelson argues, while a few institutional investors are insuring against tail risk directly, the long-term cost of such insurance strategies may be as much as the payouts: “We prefer a more fundamental approach, one that reduces tail risk by enhancing the portfolio’s overall risk-return characteristics. The most critical objective should be to keep the portfolio volatility under control.”

Often this approach will blend several distinct strategies: broader diversification, volatility-based risk management and drawdown control. These can be combined with active-management strategies such as managed futures. Many of these strategies play an important role in risk parity portfolios.

Tail risk can be managed through combining  four approaches, he argues. First, diversify by risk, as in a risk parity framework. Second, actively manage volatility, which means adjusting allocations in the light of changing market volatilities. Third, embrace uncorrelated alternatives such as managed futures. Finally, investors need to have a tail event plan before tail event occurs.

“We believe a predetermined, systematic risk management plan – from a simple stop-loss with position limits to a more complex drawdown control system – can reduce the likelihood of investors being forced into an imprudent market exit,” says Peters. While few investors would argue with that sentiment, putting it into practice is a challenge that most have not overcome.