The Technology Sector: Potential in the exponential

A number of fast-moving technological trends seem to be spreading the importance of ‘tech’ beyond IT and into every corner of our lives and our economy. Daniel Ben-Ami attempts to pierce the hype to find the stuff that will stick

Imagine it is the end of a hectic working day and you don’t feel like the long commute home by public transport. Instead, you tap a couple of times on your smart watch and within a few minutes a driverless car turns up to take you back. Since the vehicle is automated, you can watch one of your favourite films during the journey. As the car pulls up outside your house you are reminded of the days when the garden was concreted over to use as a driveway. In the era of the driverless car, only dedicated hobbyists have their own vehicles. Then, as you walk into your home, you feel happy that it is scrupulously clean, thanks to your domestic cleaning robot.

This might sound like science fiction but many of the elements either already exist or are not far away. It is already possible to use apps such as Uber and mytaxi to order taxis on a smartphone. Google has tested driverless cars, although there are still regulatory and cultural barriers to their introduction. Robotic vacuum cleaners have also been around for several years, although it turns out that it is easier to teach computers to beat grandmasters at chess than it is to train a robot to load a dishwasher.

Nor do these technologies represent the full gamut of innovation that is causing so much excitement in some circles and such alarm in others. Artificial intelligence, Big Data, drones, 3D printing and the ‘internet of things’ (linking numerous types of devices over the internet) all hold out of the promise of substantial technological advance.

For the optimists, they herald a third industrial revolution as radical as the impact of the steam engine or mass production for earlier generations. But the pessimists are not all bearded tree huggers. Stephen Hawking, one of the world’s most eminent scientists, has argued that the development of full artificial intelligence “could spell the end of the human race”. In his view, humans would be superseded as they may not be equipped to compete with their artificial counterparts.

Surge
Indeed, neither the critics nor supporters of the new technologies are necessarily those who might be expected. Many greens are upbeat on at least some of the new technologies, on the grounds that they could use fewer resources. For example, the total number of vehicles could be reduced if the new technology allows more people to make better use of fewer cars. It should no longer be necessary for vehicles to spend most of their time parked idly on the street or in car parks.

On the other hand, many who identify themselves as progressive or pro-labour fear technological advance is already leading to increased job insecurity and widening inequality.

No doubt, the advent of new technology will generate both winners and losers. For example, Frances Hudson, a global thematic strategist at Standard Life Investments (SLI), argues that cyber security companies are likely to mushroom as a result of the adoption of Big Data. On the other hand, traditional taxi firms and hoteliers are being squeezed by the likes of Uber and Airbnb.

However, the key challenge is to work out whether these technologies, either on their own or in concert, are likely to have a transformative effect on the global economy. If such a step-change is likely, this raises many follow-up questions on the nature of the shift. For instance, will there be a surge in productivity growth and corporate profits? And will goods and services become substantially cheaper as they are produced by more efficient technologies?

It is striking that, even among informed observers, opinions differ markedly. Even those who are generally positive about the potential for the new technology often see its implementation being thwarted by excessive regulation and cultural conservatism. There is no easy consensus, even when it comes to relatively near-term developments.

James Woudhuysen, one of Britain’s leading futurologists, is an avid supporter of new technology in principle but says many current claims are exaggerated. For instance, he is sceptical of the scope for sharing or on-demand economy apps such as Uber. He accepts it is possible to share homes and cars but argues that many other appliances and services do not lend themselves to sharing. “The scale of the phenomenon is very modest,” he says.

In contrast, he contends that robots could have important implications, although the scope of their introduction, so far, is often exaggerated. He points to figures from the International Federation of Robotics showing global industrial sales of 178,000 units in 2013. In contrast, in the US alone about 250,000 jobs have been created every month under the Obama administration. The two figures are not strictly comparable but they suggest labour is holding its own against the machines, so far.

This could, of course, change over time. For instance, it is already possible to buy a wheeled, safe, physically trainable robot called Baxter, from Rethink Robotics, for a basic price of only €22,000. Baxter is capable of doing numerous monotonous tasks such as machine tending, material handling and packaging. Nor should the potential for robots to transform the service sector, for example by stacking shelves in supermarkets, be ignored.

Woudhuysen is particularly upbeat about drones which, he notes, can already be bought for a few hundred euros at local electronics stores. He sees them as having enormous potential in agriculture, land use, leisure, surveillance, transport and weather forecasting. However, he points out that there is a widespread reluctance to harness them to the full. “They make people uncomfortable in today’s cultural climate,” he says. Even fears about possible crashes with manned aircraft are, in his view, overplayed. These could easily be tackled by making it mandatory for drones to have collision avoidance software installed.

Unambitious
Big Data is perhaps more difficult to characterise than some of the other new technologies. Back in 2001, Doug Laney, an analyst at Gartner, defined it in relation to the three Vs – volume, velocity and variety – referring to the huge amount of data being collected, the speed at which it could be processed and by attempts to deal with the sheer variety of formats.

Timandra Harkness, whose book on Big Data will be published by Bloomsbury next year, suggests a different set of characteristics should be highlighted today. In her view, the volume of data is not a key factor because what is considered ‘big’ changes so rapidly. Instead, she points to what she refers to as DATA: Dimensionality (different kinds of data from different sources can be linked together); Automaticity (collecting data is now the default); Timeliness; and Artificial intelligence (methods of analysing data are increasingly dependent on advanced techniques).

She says recent advances in the natural sciences would have been impossible without the ability of Big Data to sift through huge amounts of information in search of patterns. “The Higgs boson is completely the product of Big Data,” she observes. “There is absolutely no way they would have found it without it.”

While Harkness acknowledges that human judgement will often do as good a job of seeing what might happen in the real world as the biggest data machines, she nonetheless argues that Big Data can play an important role in helping business predict problems and work more efficiently. It already is widely used in the oil and gas industry. The problem, in her view, is that the implementation of Big Data is often unambitious. For example, it is more likely to be used in relatively straightforward applications, such as energy saving, rather than tackling formidable challenges such as harnessing nuclear fusion or building solar furnaces.

Given the wide range of opinions on these different technologies it is not surprising that the assessment of their broader impact also varies. Those who are most positive about the implementation of the new technologies tend to be most upbeat about their likely economic and financial effects. Sceptics on the technology tend to downplay their likely consequences. 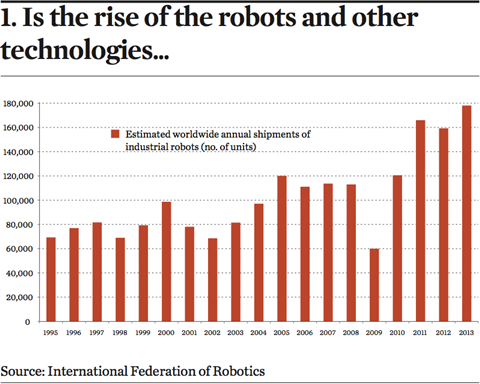 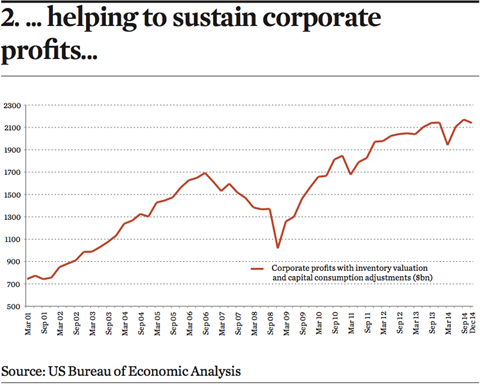 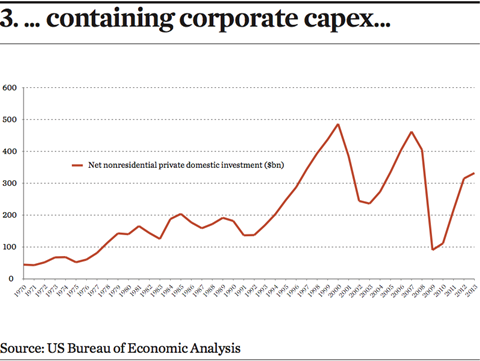 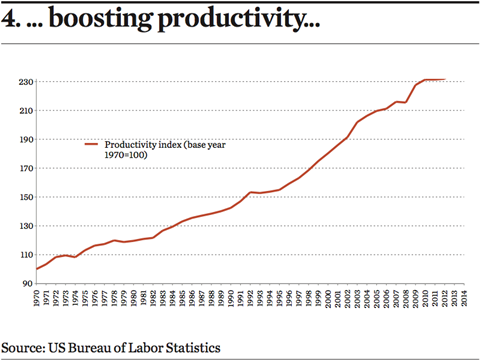 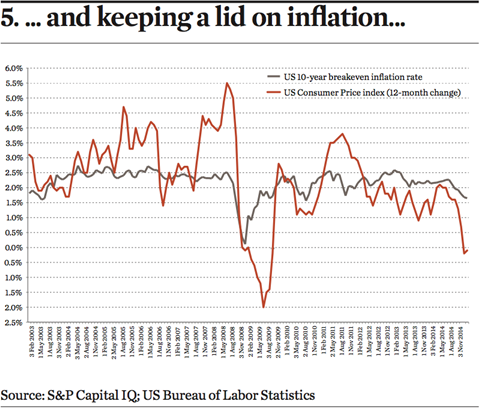 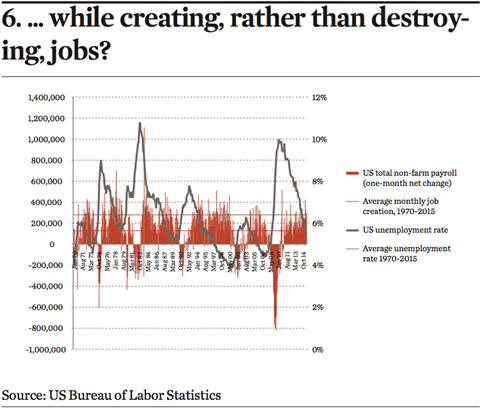 ‘Bubble’ fears
Anis Lahlou-Abid, a portfolio manager at JPMorgan Asset Management, is on the optimistic end of the scale. In his view, the technological changes may be evolutionary but their combined effect should enable a revolutionary shift in the economy. “Without a doubt, it could be transformative,” he says. Productivity could surge and stockmarkets boom.

He says this positive impact is downplayed because the markets are still haunted by the impact of the technology boom of the late 1990s. Even those who are too young to remember it are fearful that rising optimism could be a prelude to a bust. “The internet bubble is still fresh in the minds of even the youngest among us,” he says.

In his view, fears of increasing unemployment and widening inequality are overplayed. Although technological advance can destroy old jobs, it also creates new ones. Absolute living standards should also rise as capital is reallocated to where it’s going to be more productive, he insists.

Frederic Fayolle, a portfolio manager at Deutsche Asset & Wealth Management, is at the more guarded end of the spectrum. Although he is certainly not opposed to the new technology, he sees its impact as likely to be more incremental than transformative. For a start, he points out that the productivity growth bonanza from the internet and PC revolution has been “a bit elusive”. The dramatic technology-driven productivity gains forecast by many in the past have failed to materialise.

He also points out that revenue from new technologies will have to replace shrinking revenue streams from existing technologies such as servers and mainframe computers. In some cases, such as the internet of things, innovations will rely on traditional technologies such as semiconductors and microcontrollers. So the net boost to the technology sector itself could be limited.

Henk Grootveld, a fund manager and the head of trends investing at Rolinco, sees elements of hype as well as real innovation in the new technology. A technology that is being hyped at one point can become real a couple of years later.

He points to 3D printing, also known as additive manufacturing, as a technology that could have a large impact in a relatively short time. He says it will not be long before all dental implants are printed and sees a lot of potential for printing aeroplanes and their engines. There are already plans to build a 3D printed electric car using Local Motors’ network of 100 microfactories across the globe over the next 10 years. Such innovations shorten the time to market and therefore increase productivity.

Grootveld also argues that emerging economies could benefit from the new technologies. He accepts that Western firms might find it more viable to manufacture at home than in the recent past. However, he says: “If we can 3D print everything, so can the Chinese.”

In contrast, Frances Hudson of SLI argues that 3D printing could make it more difficult for poorer countries to develop their industrial capacity. “It might make it harder for them to move up the value chain,” she says.

One final and generally neglected point should be borne in mind in relation to the discussion on the potential of new technology. Since at least as far back as the 1990s, the term ‘technology’ has often been used synonymously with ‘information technology’. But although IT is no doubt an important sector, the application of technology goes much further. As James Woudhuysen argues: “The important developments are in IT but they are also in construction, energy, transport, agriculture, materials, biotech and medicine.”

The technologies that are generating the most excitement at present are not necessarily those that will prove most transformative in the future.

The Technology Sector: Potential in the exponential