The active-passive debate: A survey canvasses opinions of pension investors

Game changer or new danger? That is the question behind the spectacular worldwide rise of passive funds in this decade.

Their advocates see this trend as being as immutable as the momentum of a super tanker. Passives have delivered higher net-of-fee returns than active funds, most of which struggled to hit their benchmarks over extended periods.

Their detractors retort that the rise of passives is the result of a one-off boost from unconventional monetary policies in America, Europe and Japan. They also question what systemic dangers may be lurking in the background with this relentless concentration of assets in monolithic indices on autopilot.

So far, the debate has been emotional and polarising, generating more heat than light. It has suffered from recency bias: putting too much emphasis on recent trends to the exclusion of historical experience.

To gain a clear-eyed view of reality on the ground, we have surveyed 153 pension plans in 25 countries with total AUM of €2.9trn in a new report entitled ‘Passive investing: reshaping the global investment landscape’. Some of its key findings are summarised in the box.

Passive funds are widely used by our survey respondents (figure 1, left chart) – 66% see them as a mature part of their portfolio and a further 15% are now in the implementation phase. Amongst the rest, 3% are close to decision making and the remaining 16% are still in the awareness-raising phase.

Passive has been implemented via three vehicles (figure 1, right chart): traditional indexed funds used by 48% of respondents, segregated accounts by 38% and exchange-traded funds (ETFs) by 23%.

Thus, passive is already mainstream for most pension plans. Its growth has been mainly driven by four factors.

Of those surveyed, 58% point to changing investor attitudes that favour low-fee products, as active funds have been unable to beat their benchmarks in this decade. As one respondent put it: “With fees that are roughly one-tenth of those charged by active funds, is it any wonder that passive have become a money magnet?”

Strategic asset allocation – rather than stock selection – was identified by 55% as the main driver of performance. For them, the old adage ‘fix asset allocation and the numbers will follow’ remains valid. To underpin it, actions have also been taken to improve execution capabilities to reduce the gap between actual returns and promises made beforehand. The implied leakage is minimised via passive that avoid poor manager selection, style drift, the hidden cost of excessive trading and higher fees.

Nearly half (48%) of respondents point to the rise of risk-factor investing facilitated by new digital technology. They no longer see the world of investing as binary: active versus passive. To counter the drawbacks of these two styles, they now favour a third way – systematic rules-based investing that combines the best of both. Smart beta is the prominent example that tilts passive towards specific factor premia such as value, size, quality and low variance. Over time, advances in the velocity, volume and variety of big data are expected to deliver ever more investible information and actionable insights.

In the survey, 41% say that ESG and other newly favoured themes will promote low-cost passive approaches. They are putting climate change and other recent risks at the heart of their sustainable investing and stewardship goals. In the current environment, they see passive funds as being ideal vehicles for harvesting the associated risk premia. Passive is not only becoming core to investment strategies, it is  also being used to access specialist asset classes, secular investment themes and cyclical risk factors.

More than half, 68%, of our respondents see passives as buying yesterday’s winners and over-inflating valuations. Securities that may not be bought singularly on their own merits are boosted by bulk buying. That helps the good, the bad and the ugly indiscriminately. It could be argued that their strong inflows tend to overinflate the valuations of index components, disconnect them from their fundamentals and make indices more informationally inefficient over time.

As a result, 52% report that they feel passive could potentially destabilise markets and undermine the diversification they have long promised. Furthermore, stocks in broader indices like the S&P 500 have ended up with an aggregate weight in pension portfolios far in excess of that recorded in the index, as the same stocks are replicated by various ETFs that are also in the same portfolio. 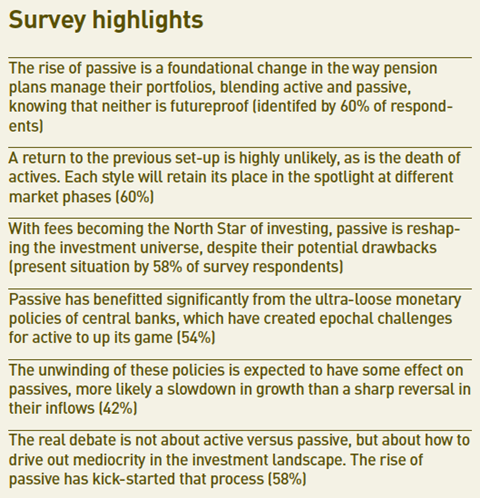 Passive, 42% say, makes booms and busts more likely owing to the strong price momentum in both directions. Although passive now accounts for roughly 25% of global assets, its share of daily trading volume is substantial – almost double that amount.

Despite these potential drawbacks, our survey respondents see passive maintaining their growth momentum over the rest of this decade. As one of them put it: “The swing towards passive has a long way to go. We may be only halfway there.”

Like yin and yang in traditional Chinese philosophy, active and passive may seem diametric opposites – yet they are interdependent. There is no clear water between them.

After all, markets cannot always be informationally efficient on account of the implicit ‘index premium’. This results when companies in an index attract new money on account of their inclusion because of their size, not necessarily their intrinsic worth. Hence, as more money flows into passive, the premium rises, making markets more inefficient.

This enables active managers to buy undervalued stocks and sell overvalued ones. The result is greater efficiency that helps passive. But as more money flows into passive, valuations become distorted, creating opportunities for actives.

Historically, this pattern has prevailed more often than not: overvaluation begets undervaluation while the reverse is also true. For example, in the 2000s, active outperformed passive, after falling behind in the 1990s. In this decade, its fortune reversed with the ebb and flow of the markets. History repeats itself, albeit without a predefined timescale. One does relatively better when the other does not, only to experience a reversal of fortune as the market cycle turns.

Markets work best when investors think and act independently, not all together. When everybody does the same thing, it all becomes unhinged. This much is clear from the diversity of views in our survey results (figure 2). 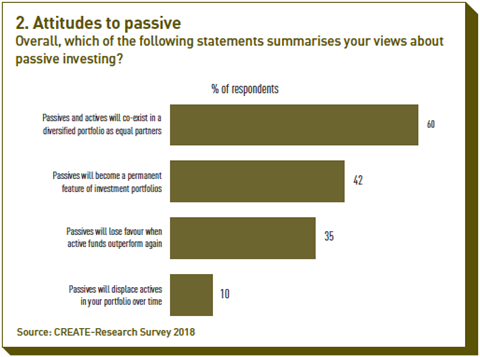 Of our respondents, 60% say that passive and active will co-exist in a diversified portfolio so as to minimise risks and maximise returns. They also contend that the rise of passive has posed a stark challenge to active managers: innovate and adapt or become irrelevant in the face of Darwinian forces that favour managers who deliver value for money.

Passive is expected by 42% to become a permanent feature of their investment portfolios. If and when markets reverse, the swing away from passive will be moderate. Lower fees are decisively moving asset allocation in a low-return environment, as quantitative easing (QE) has borrowed against future returns.

Any such swing will be much bigger, say 35%, although not to the point of reversing all the gains in market share in this decade. In previous cycles, when a bull market eventually came to an end, passive funds were left holding stocks and sectors with poor fundamentals. In contrast, active funds were better placed to act on such drivers, pinpointing specific opportunities (and threats), and side-stepping the weak spots. Passive investors could suffer full market losses when the tide turns – possibly more than active investors, who can proactively switch into cash. As central banks unwind their super-easy monetary policies, passive may well face strong headwinds. Unsurprisingly, therefore, only 10% of respondents expect passive to replace active.

Irrespective of the scenario, passive is expected to grow at roughly 6% per year at least over the next three years, with growth skewed towards smart beta and ESG indices, as we shall see in the next article in this series.

“Markets work best when investors think and act independently, not  all together. When everybody does the same thing, it all becomes unhinged”

At the same time, there is ample recognition that passive is not an all-weather strategy. Like its physical counterpart, the investment universe is cyclical and adaptive. Styles go in and out of fashion. Additionally, some passive styles (like smart beta and themed ETFs) have not been stress tested by time or events. It is rash to project the here and now onto the future. The true test of passive will be when it is judged not on its current inflows, but on its resilience when the inevitable correction comes.

That is why our survey respondents have adopted an eclectic stance implied by the data in figure 2, favouring a broad-based diversification that encompasses both passives and actives, duly recognising their respective strengths and weaknesses. As one respondent put it: “Historically, actives and passives have relied on each other to survive and thrive, as market efficiency has varied during each cycle.”

With the rise of passive, pension plans are no longer willing to pay alpha fees for beta returns. The paradigm shift in the asset management industry is not a straightforward story of investors moving from active to passive. Instead, it is a more nuanced trend of certain strategies becoming commoditised. Our understanding of performance has been radically altered as the role of beta, alpha and smart beta in driving performance has become more transparent.

This ultimately means that active managers will have to focus on delivering higher net returns and clear, measurable value-added services to investors.

With the rise of passive, pension plans are no longer willing to pay alpha fees for beta returns.

Amin Rajan is CEO at CREATE-Research and a member of The 300 Club. Simon Klein is head of passive sales specialists – EMEA & APAC, global client group, at DWS