Biases are systematic errors of judgement – partial or illogical perspectives on sets of information. Financial markets are fundamentally the flow of information between people; they are driven by human judgement. Hence, we think markets are perfect for incubating bias. There is a constant stream of information, complexity and, lurking at the end of misplaced forecasts, risk. Behavioural finance has recognised this and moved investors centre stage to study their biases. Investors may be obvious candidates for bias, but most risk in financial markets springs from company management – the rest of the market merely reacts to it.

In the 1970s Kahneman and Tversky discovered that we are not good intuitive statisticians. Faced with risky or snap statistical judgments, we lean on ‘heuristics’ – mental tricks that help us make sense of the world and keep us alive. Heuristics lead us into bias when they are used in an unfamiliar environment: stone-age man did not have a stock market.

Kahneman and Tversky believe that we think using two systems: system 1 is effortless, automatic and intuitive; system 2 shifts attention to effortful mental activities, churns logic, deliberates. System 1 is great at keeping us alive, but in particular environments its neat bag of tricks can create systematic errors, and system 2 is often ill-equipped to bail it out. Kahneman and Tversky catalogued the main biases of system 1, and the environments that liberate them.

Most accounting research focuses on either statistics that reveal red flags of fraud, or that characterise investor anxiety. We have found, however, research on the structure of company balance sheets that is revealing about company management risk.

David Hershliefer and his colleagues at Ohio State University found that firms with “bloated” balance sheets – where the cumulative gap between accounting value-added and cash value-added is widest – are more likely to blow up than firms with the smallest gap. Furthermore, they found that those bloated firm’s share prices subsequently bomb, and the least bloated subsequently rise. Hershliefer hypothesised that their ‘bloat’ indicator is a proxy for investor over-optimism. We will argue for a different take on their results.

Kahneman and Tversky outlined a group of key human biases: we are prone to be unduly influenced by memorable, salient information; we judge likelihood by superficial similarity, not base-rate statistics; we are unusually influenced by irrelevant quantitative information; and we view the world as more benign and predictable than it really is.

We think overconfidence bias is most relevant to company management. Why? Company management takes risk with capital, and justifies those actions to shareholders. Most managers have spent 20 years scrambling up the career ladder to reach the top. They are prime candidates for optimism bias. The bias literature shows company managements are generally prone to giving insufficiently narrow error ranges for predictions; rating themselves higher than peers; ignoring base-rate statistics; overestimating their ability to influence events; preferring action over doing nothing; viewing risk as a challenge to be overcome; and underestimating the time and cost of complex projects.

Hershliefer and colleagues argue that if investors have limited attention, then firms with accounts that accentuate the positive will be rated higher. When cumulative operating income outstrips cumulative cash value, they argue, it becomes hard for the firm to sustain further earnings growth. They further argue that investors with limited attention tend to overvalue firms whose balance sheets are bloated, so bloat measures investor optimism. And, as such, bloat should negatively predict subsequent stock returns. So, for them, it is mostly about investor biases. We think this is an interesting argument, but we don’t like mixing up investor and management biases. We think it pays to untangle the risks that management is taking first.

We think managers reveal their riskiness in two ways. Firstly, it is shown through their investment plans and the level of patience they apply to these plans. Patience is not an attribute of overconfident people. So the size of balance sheet bloat partly reflects the degree of their impatience.

The second way it is revealed is through reporting and how these managers justify their plans. Managers are held accountable via their company’s accounts and by what they say in public. While there are accounting rules, there is a certain amount of latitude in how the accounts are put together. How much managers choose to use these rules to paint a flattering picture – the gap between accounting earnings and cash earnings – can, in our view, reveal how hard they are straining to justify their overconfidence. Firms taking these risks in their balance sheets are more fragile. To us these look like risks shaped not by randomness, but by overconfidence.

We hypothesise the following about company managers. From experience, we think they are more likely to be risk takers –  by personality, and from their incentives. From Kahneman, we think they are likely armed to the teeth with overconfidence and over-optimism biases, and these biases are always on. From accounting papers, we believe that they reveal their risk taking through the impatience of their investment plans.

We think bias gives us their motivation but their environment gives them the means, and opportunity. Means and opportunity act as switches that, when flipped on, release these biases.

Confidence biases can do little damage if managers can’t act on them to seek growth. This happens two ways: if a business is starved of capital, then management biases are straitjacketed; or if a business has plenty of capital from its current operations to fund easy growth, then management has no need to gamble. Inverting this helps us define a bad environment for company managers: they need the means of access to external capital, and they face a growth opportunity that requires action (growth doesn’t come to them).

Not all opportunities are equally bad for biases. Some encourage more biased behaviour, particularly the biases of denial. We see two kinds: myopia and denial of change.

Myopia proliferates when a doorway of dazzling opportunity is open to capital from competition, leading to gold rushes or booms – the illusion of control blinds managers’ eyes to competition (see Vestas). Denial in face of change, on the other hand, is prevalent in industries where the future is seen as a variant of the near past, which has only been good, but where there has been a disruption and growth is harder to come by (see Hewlett Packard). And both of these biases are amplified when accounting regulation gives company managers latitude to obscure risk (see, notoriously, Enron).

We think company managers are prone to overconfidence biases. We find patterns of managers’ biased risk taking through measures like Hershliefer’s, as they reveal the impatience of their investment plans, and the strain they are making to justify their overconfidence. Given the right conditions, we think it’s safe to assume that management is prone to overconfidence and its cheery henchman over-optimism. But management does not always have the opportunity to release these biases; that depends on the nature of opportunity and the means to risk capital blindly. 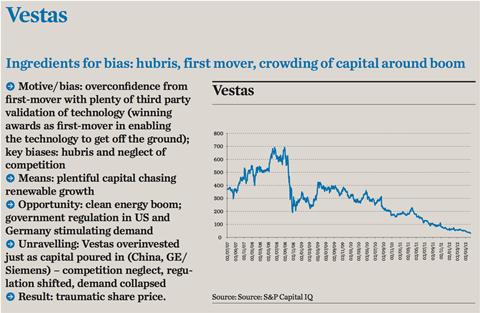 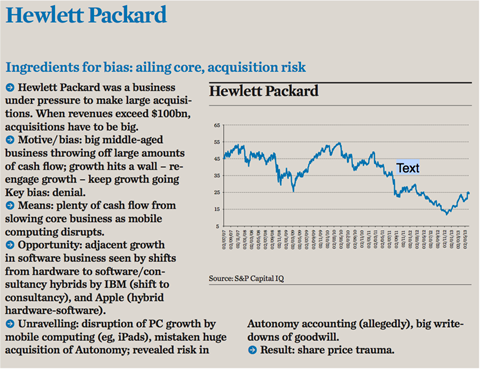 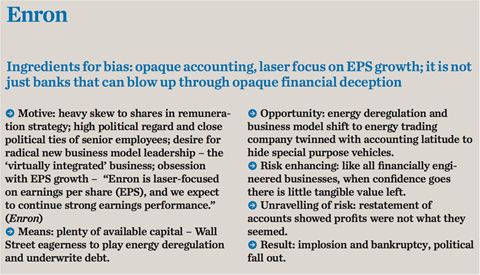