The investment world is not usually shy of promoting good news so it seems odd that the euro-zone’s productivity uptick has got so little attention. An improvement in such an important economic indicator could reasonably be considered a cause for celebration.

Indeed, many economists view productivity as the paramount indicator of economic health. Paul Krugman, a Nobel laureate in economics, spoke for many in the profession when he argued that “productivity isn’t everything, but, in the long run, it is almost everything. A country’s ability to improve its standard of living over time depends almost entirely on its ability to raise its output per worker.”

It is not as if the discussion is confined to academic economists. No less a figure than Mario Draghi, the president of the European Central Bank (ECB), warned of the serious consequences of poor productivity growth in a speech in November 2016 – that is, before the recent improvement materialised. He also emphasised that it could have direct policy implications: “This slowdown in productivity growth will matter greatly for our future prosperity, and will have direct consequences for the conduct of monetary and fiscal policy and the cohesion of the euro area.”

Before looking at the recent improvement it is important to put it into its proper historical context. Ilaria Maselli, European economist at the Conference Board, a global research organisation, points out that the average level of productivity growth across the large European economies (including the UK) has fallen in every decade since the 1970s.

Draghi’s 2016 speech pointed to the decline in euro-zone productivity growth relative to other developed economies. “In 1995, productivity growth in the euro area was on a par with the rest of the world at about 2%. But now, at below 0.5%, it lags behind the growth rates of the United States, other advanced economies and emerging markets.”

Economists typically attribute the productivity slowdown to several factors, including an ageing population and skill shortages. Roelof Salomons, chief strategist at Kempen Capital Management, emphasises the key role of low levels of business investment. “Most of it is related to a slowdown in capital intensity. We’ve not grown the capital stock as we used to.” In other words, companies have been slow to introduce the new technology which could enable stronger increases in productivity. 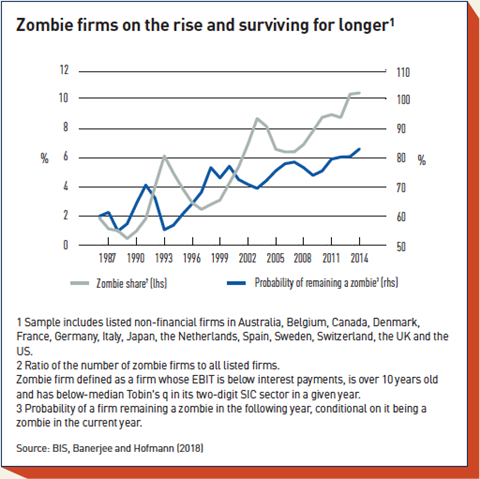 He also argues that the protracted period of quantitative easing (QE) has led to a misallocation of capital. Artificially low interest rates means there is less incentive for companies to bolster productivity by restructuring themselves. The normal process of ‘creative destruction’ – in which companies fail and new ones emerge – is not happening. “If you keep rates low for a long time you risk economies becoming lethargic and the creative destruction not happening,” he says. Zombie companies – essentially those that are simply kept alive by the surfeit of cheap money – survive for longer than they should (see figure). The Bank for International Settlements, the central bankers’ central bank, has also recently aired this argument.

This then leaves the argument of what to make of the recent uptick. Euro-zone productivity growth was, at 0.9% in 2017, according to the Conference Board, at its highest level since 2011. In 2018 it is forecast to rise to 1.2%.

Valentijn van Nieuwenhuijzen, chief investment officer at NN Investment Partners, probably speaks for many when he says that it is unclear whether this is just a cyclical improvement. However, he argues it is likely to continue for at least a year or two. In his view, it is too early to tell whether it is the start of a new long-term trend.

A key question relates to what economists refer to as the diffusion or dispersion of technology. A peculiarity of the present is that a few companies have succeeded in adopting the new technology while many others have failed. “What is interesting is that in the past the productivity growth of top firms was transmitted to the whole market but this process seems to have stopped in the last decade,” says the Conference Board’s Maselli.

Van Nieuwenhuijzen describes the recent failure of innovation to translate into widespread productivity gains as an “enigma”. Like Maselli, he argues there is a problem with the diffusion of technology. “The degree of innovation we’ve seen is probably less dispersed across industries than first appears,” he says.

If Europe can find a way to spread the use of new technology more widely it is likely that the productivity uptick will gain momentum. Otherwise the region will find it hard to escape from its economic rut.