Market volatility took a toll on several global asset managers last year, according to IPE’s Top 400 survey for 2019, with six of the top 10 groups reporting a lower AUM figure for 2019 compared with the previous year.

However, the total AUM of the top 10 global asset managers in IPE’s annual ranking was roughly stable at €22.3trn. The share of assets managed by the top 10 managers was also stable compared with last year, at 33.7%.

For the sixth year running, the top five biggest managers are BlackRock, with €5.3trn under management, Vanguard (€4.3trn), SSGA (€2.2trn), Fidelity Investments (€2.1trn) and BNY Mellon Investment Management (€1.5trn). BlackRock experienced the largest inflows out of the overall ranking during 2018, raising more than €100bn in assets.

Most of the top 10 managers retained their ranking from last year’s survey. Only JP Morgan Asset Management managed to climb one spot to sixth place, overtaking Capital Group.

The overall AUM of global managers grew by just over 1% to €66.4trn. The pace of growth is slowed significantly compared with the past three years: AUM grew by nearly 4% in 2018 and and more than 12% in 2017.

The 2019 ranking of the 10 largest managers of European institutional assets is strikingly different from last year’s. BlackRock and Legal & General Investment Management maintained the top two spots, with €902bn and €808bn of AUM respectively.

This article was updated on 6 June to clarify the relationship between Insight Investment and BNY Mellon IM. 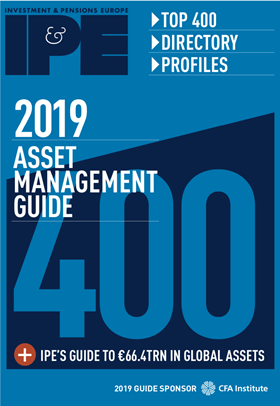 Top 400 Asset Managers 2019: Cultures Change
Is asset management a tech business, a people business, or both?

Artificial intelligence: Let me tell you what you really think
How are managers deploying natural language processing to analyse management sentiment in earnings calls?

IPE offers unrivalled intelligence on over 400 global asset managers covering over 100 categories of products, strategies, asset classes, and key data areas. The data set is available to buy with a variety of purchase options.