Trade dispute: Germany against the rest

Germany’s trade policies are under attack again and not just from US President Donald Trump. On the contrary, Germany’s critics on this question include the International Monetary Fund (IMF), the Organisation for Economic Cooperation and Development (OECD) and even the European Commission.

The target for the criticism is Germany’s yawning current account surplus. Or, in layman’s terms, the country’s habit of exporting substantially more than it imports. At present, the deficit is equivalent to over 8% of GDP (see figure).

To many Germans, and indeed to some non-Germans, the criticism is baffling. They find it hard to understand why Germany’s export success should be denounced.

However, even those who support Germany’s position would do well to understand the critics’ reasoning. Only then it is possible to have an informed debate on the topic. The underlying question of where the weaknesses of the global economy really lie is far from an academic one.

The best place to start is with a simplified economic model. Reality may be more complex but this approach enables the key points to be seen more clearly.

Imagine a global economy with only two countries. Let us call them Germania and Restonia. If Germania has a trade surplus with Restonia then, by definition, Restonia must have a corresponding trade deficit with Germania. So a German surplus of, say, €200bn, necessarily means a Restonian deficit of €200bn.

It is mathematically impossible for every country to have a trade surplus. A surplus in one place must correspond to an equivalent deficit elsewhere.

From an economic perspective, the ideal is for the two countries to broadly balance. That does not necessarily mean that there should be no imbalances but that they should be kept small.

In our simplified model it is possible to see that a large Germanian trade surplus could become increasingly counter-productive. Restonia could run out of funds to keep buying Germanian goods and services. For this perspective, it would be better for the global economy, that is both countries in our model, if Germania ended up consuming more domestically. That would mean both higher living standards for Germanian consumers and higher Restonian exports.

Before looking more closely at the actual situation, it is important to note that there are further implications of this model. For example, a trade surplus in one direction means an equivalent capital flow in the opposite direction. So if Restonia has a deficit of €200bn, then Germania must provide €200bn to allow Restonia to buy its products. 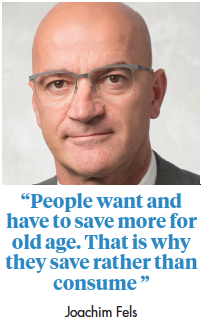 For reasons there is insufficient space to explain here, there is also a relationship between trade and savings. A country with a large trade surplus, such as Germania, will necessarily also have a high savings rate. In effect, it is saving a substantial share of its output while curbing its consumption of foreign products.

In the real world, Sebastian Dullien, professor of international economics at the Hochschule für Technik und Wirtschaft in Berlin, is in a minority among German economists in siding with Germany’s critics. “It takes demand away at a global level but in particular from our European trading partners,” he says. “A large current-account surplus poses a security risk for the world economy and if Germany is winning, someone else has to pay the price.”

Dullien is scathing of the arguments in a paper written by Ludger Schuknecht, chief economist at the finance ministry, defending Germany’s position. For example, Dullien rejects the claim that Germany is taking sufficient measures to bolster its domestic demand. “It’s too little and too slow,” he says.

For Dullien, the argument that Germany cannot be artificially bolstering exports since, as an EU member, it has no independent trade policy, is disingenuous. For him, the exchange rate is a key channel for manipulating trade. “Empirically we’ve seen a strong real devaluation within the euro-zone. This is a mercantilist undervaluation strategy and you don’t need a trade policy for that.”

In contrast, Seema Shah, global investment strategist at Principal Global Investors, is unusual for an economist in the English-speaking world in broadly defending Germany’s position. “I don’t see Germany as distorting anything,” she says. “It’s more a reflection of a dynamic economy.”

That is not to say she is opposed to increased German spending on infrastructure or boosting wages. But, for her, such measures would be welcome as they would bolster the German economy, rather than because it is out of balance with the rest of the world.

Joachim Fels, global economic adviser to Pimco, argues that the large surplus is a symptom of underlying economic problems rather than a weakness in itself. First, it is a result of Germany’s old and ageing population. “People want and have to save more for old age. That is why they save rather than consume.”

Second, it reflects the low level of investment spending by both the corporate sector and the public sector. In relation to corporates, a substantial proportion of their investment is overseas so the level of domestic investment is relatively low.

Fels points out that a counterpart of Germany’s large trade surplus is its role as a provider of capital overseas. From that perspective, the export of German capital is helping to shore up living standards overseas.

Given the persistent character of Germany’s current account surplus it is likely to take years before such arguments are resolved.