The Turkish government is reforming its private pensions system in a bid to boost the country’s savings rate, writes Reeta Paakkinen

• Turkey’s private pensions system has 5.5m savers and assets of €12.2bn.
• Assets are expected to top €16bn by the  end of 2015 with 6m savers.
• Funds are managed by 19 pension insurance companies offering 246 funds.
• 57% of assets are invested in government bonds with 12.5% in equities.
• Investment according to Islamic principles is gaining in popularity.

The latest Turkish development plan forecasts an increase in the number of people enrolled in private pensions from the current 5m to nearly 9m people by 2018. The government has supported the private pensions sector through incentives such as tax deductions and contribution matching. Its goal is to boost the country’s domestic savings rate, one of the economy’s main weaknesses alongside its current account deficit.

“Last year, the Turkish pensions system started to reap the results of new legislative regulations put into force since 2013,” Turkey’s Treasury undersecretary, Cavit Dağdaş, wrote in the annual report of the Turkish Pension Monitoring Centre (EGM). The main regulatory changes included a 25% state contribution, reductions in fees paid by participants, and an implementation of withholding tax only on returns in case of early drop-out from the system. Since January 2013, the government has been matching 25% of individual contributions up to TRY1,000 (€32.50) a month. Participants now have access to government contributions through a gradual vesting system – 15% after the first three years, 35% after six years, 60% after 10 years and 100% at retirement at the age of 56. Compared with 2013, state contributions increased by 162%.

Ayhan Sincek, CEO of the TRY90m Katılım Emeklilik private pensions business, says government contributions will support the growth in the system this year too.

Katılım Emeklilik was launched by two of Turkey’s participation (Islamic) banks, Albaraka Türk and Kuveyt Türk, in September 2014. It sells private pension plans to individuals and institutions. The assets in its six funds are invested in interest-free instruments such as  public rent certificates and gold, according to the principles of Islamic finance, and are managed by Ergo Portfolio. “With the state contribution, the number of participants can reach 6m this year. Our goal is to have 100,000 new customers and reach a fund volume exceeding TRY200m this year,” Sincek says.

• Turkey’s private pensions system has 5.5m savers and assets of €12.2bn.
• Assets are expected to top €16bn by the  end of 2015 with 6m savers.
• Funds are managed by 19 pension insurance companies offering 246 funds.
• 57% of assets are invested in government bonds with 12.5% in equities.
• Investment according to Islamic principles is gaining in popularity.

The state Treasury is working on further reforms: a statute, which would involve auto-enrolment in the private pensions system for every person starting work and facilitating lifelong pensions rather than lump-sum retirement payouts.

Solmaz Altın, chief executive officer of Allianz Turkey, notes that the planned reforms represent significant changes. “If these two projects happen, we expect that there will be a remarkable growth in both the number of participants as well as assets under management. It is completely possible that the sector will have 6m participants and assets worth TRY50bn by the end of 2015,” Altın says.

“We have a long way to go to achieve our desired level of pension savings. We are going to take further regulatory steps to maximise participation in the system on a corporate basis”
Cavit Dağdaş

At present, the Turkish private pensions system is mainly a third-pillar voluntary system, where 73% of all assets belong to individual pension plans and 22% to groups. The remaining 5% are so-called group pension certificates partly sponsored by the employer.

The proportion of these contracts is increasing. An growing number of employers offer pension plans as incentives to their staff, mainly in the bigger cities. “Even though these indicators show that the system is on a good track, we have a long way to go to achieve our desired level of pension savings. We are going to take further regulatory steps to maximise participation in the system on a corporate basis,” wrote Dağdaş.

Katılım has started offering group plans to public sector employees. Sincek says the firm has contracts with the local branches of the Confederation of Public Servants’ Trade Unions (Memur-Sen) in the towns of Bursa, Kocaeli and Uşak, and the Kocaeli branch of the Municipal Public Services Workers’ Trade Union (Hizmet-İş). “We have a pension plan for all Türk Telekom employees in Turkey and offer schemes also for teachers and notaries. We are in negotiations with many other institutions and getting a lot of interest from them,” he says.

Private pension assets in Turkey continue to be invested heavily in government bonds and bills, stocks and reverse repo. In March 2015, the average pension portfolio was invested in Treasury bills and government bonds (56.7%), stocks (12.5%), reverse repo (7.5%), foreign securities (1.3%), money markets (1%) and other investment vehicles (21%), according to Turkey’s Capital Markets Board (SPK). The overall approach is conservative and risk-averse.

Garanti Pension is at present the country’s largest private pension insurance company in number of clients – 928,264 in May 2015. “Since pension plans have long investment horizons, the core strategy should definitely focus on high returns in the long run, and the most rewarding instrument in that perspective [in Turkey] is definitely the equity market,” says Onaran.

“Currently, our equity exposure is slightly lower than the market average, which is approximately 13%, and we are planning to increase that up to 15% in a 2-3 year period and 20% in the long run. To achieve that, we will gradually increase the average equity ratio within our flexible funds as market prices fall to reasonably low levels and we will periodically contact our customers and offer them alternative asset allocations,” he says.

While Katılım Emeklilik expects to attract more customers with its Islamic investment funds, Garanti’s Onaran says the firm envisions launching property, commodity and international equity funds in the future. Property investments have been popular in Turkey and because of increasing demand the returns are strong compared with other investments such as time deposits, government bonds and equities.

Actuaries have urged Greece to consider defined contribution (DC) pensions as part of overall retirement provision now that the foundations of pensions reform have been laid.

In a paper on the Greek pension reform strategy undertaken between 2010 and 2014, Georgios Symeonidis, executive board member of the Hellenic Actuarial Authority, said this would help people organise their lives.

Symeonidis said: “It is now time for the government to distinguish between welfare and pension, to educate people on the demographic developments and the utmost importance these play on their pension income when they retire in a few decades.”

He added: “DC systems should be taken into consideration by the Greek people when allocating money for third-age income, as they are by many other Europeans.”

He said this did not mean existing safety nets should be abolished but people should be given incentives to invest part of their third-age income into a different kind of system.

“This also increases risk spreading and allows people to organise their lives in a much better way,” Symeonidis said.

The year-on-year return in Turkey’s real estate market to March 2015 was 19%, according to the central bank. “If and when the regulations [on property funds at pension companies] will hopefully be revised, real estate as an investment option and property funds would definitely be popular among pension investors. We will probably be the pioneers in this field by that time,” Onaran says. 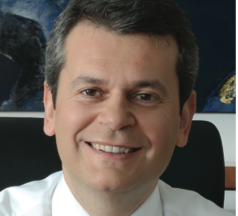 “Since pension plans have long investment horizons, the core strategy should definitely focus on high yields in the long run, and the most rewarding instrument in that perspective is definitely the equity market” Cemal Onaran

Garanti is also planning to launch funds for international equities and commodities, and increase its allocation to foreign stocks to diversify domestic risk and vulnerability. “These options will be considered and probably be ready for execution in three to four years. As the financial literacy among investors improves, demand for alternative instruments like foreign stock market investments will increase,” says Onaran.

During the first nine months since its launch in September 2014, Katılım Emeklilik attracted 44,500 pension savers and assets under management totalling TRY95m, which illustrates the demand from Turkish pension savers for conservative investment vehicles that go hand-in-hand with their personal views on religion.

Katılım Emeklilik aims to gain 100,000 new clients in 2015, and become the largest interest-free pension insurance company in the country. “People are increasingly asking about interest-free investment vehicles. Our five-year goal is to reach 500,000 participants and a fund value of TRY1bn. Our expectation is that by 2023, some 15% of all members in the private pensions system will have chosen interest-free ways to invest and the number of these customers will have reached 1.5m,” says Sincek.