Looking towards a new Japan

3
Two sides of the bitcoin

Two sides of the bitcoin

In December 2017 BusinessWaste.co.uk, a British refuse and recycling company, announced that it would become the first business in its sector anywhere in the world to accept bitcoin, the world’s most widespread cryptocurrency.

Cryptocurrencies is the term used for the digital currencies, invented by private citizens rather than by governments, which use cryptography to make transactions in the currency secure, to control the creation of additional units, and to verify the transfer of the currency from one person to another. They do this using blockchain, a ledger that keeps a record of the whole process.

Fans and sceptics towards cryptocurrencies could each read this news in their own way.

Supporters might argue that if cryptocurrencies are even being accepted by a company in a traditional sector far outside the tech industry and a few businesses patronised by technology entrepreneurs, they have truly arrived. As well as bitcoin, BusinessWaste.co.uk accepts litecoin and ethereum, two other cryptocurrencies.

Critics might say that this news is, instead an appropriate symbol of a different kind: how fitting that cryptocurrencies are being welcomed by a company that takes in people’s rubbish.

Institutional investors have certainly been far from welcoming towards cryptocurrencies; their surge in value has instead been powered by retail investors. “It’s a novelty investment for risk-taking retail investors, but I don’t think it has a role to play in an institutional portfolio,” says Paul O’Connor, head of Janus Henderson’s UK-based multi-asset team in London. Chris Iggo, investment officer for fixed income at Axa Investment Managers in London, is more forthright, describing the recent rise in bitcoin as “a digital bubble”, before adding: “Some say robots may be coming to take our jobs but I think bitcoin might take people’s wealth first.”

Over the same period, the value of one bitcoin rose by 1,313% to $13,411, according to data from the website Coin Market Cap, before surging again to $15,523 in January. A unit in Cyber Capital’s fund rose 6,800% over the same period. Smit calculates that, based on the return over the past several years, a pension fund that invested 1% of its portfolio in Cyber Capital would have recorded a rise in its annual portfolio return from 7% – to take a typical pension fund target – to 9%.

Believers in cryptocurrencies say that these high investment returns at least partly reflect the underlying utility of cryptocurrencies. Many of them like bitcoin in particular because of its dominant share of the total market.

Jean-Charles Cabelguen, head of innovation and adoption at iEx.ec, a Lyon-based startup building a blockchain-based cloud computing platform, acknowledges the flaws in bitcoin. However, he says: “Bitcoin is in a very strong position because it is the first currency using blockchain technology to gain a huge amount of popularity, and it still accounts for 30 or 40% of the total crypto market”.

Advocates of bitcoin say that it has several qualities where it is better than conventional currencies.

To start with, buyers and sellers of goods and services can use it as a medium of exchange without having to call on a third party, such as a bank, to guarantee the transaction. This is because of the blockchain.

Digital records of all bitcoin transactions are lumped together into blocks, and then bound together cryptographically and chronologically into a chain, using algorithms. Records of the transactions are not stored in one place, but distributed across computers owned by the general public around the world. In return for lending their computer power, these people receive payment in new bitcoin issuance. Once updated, the ledger of bitcoin transactions thus far cannot be altered.

Because the ledger is distributed across so many computers, and visible for all to see, it is harder for hackers to attack it. They would have to access every copy of the ledger simultaneously to make a successful hack. The public nature of the ledger also makes fraud and error easy to spot. 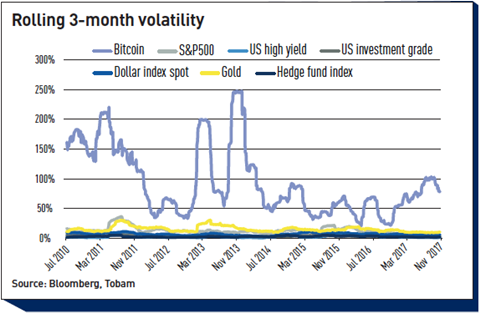 Advocates of bitcoin also praise its potential as a store of value. Sceptics have argued that bitcoin will never be widespread enough as a medium of exchange for it to gain this status: if it is not used millions and millions of times every day as a currency, how can anyone know what its true value is? However, Yves Choueifaty, Paris-based president and chief investment officer of Tobam, an asset manager that in November 2017 launched the Tobam Bitcoin fund, has a different point of view. “I don’t believe bitcoin is a currency or will ever be a currency,” he says. It is instead, he says, closer to a commodity used as a measurement of value, such as gold.

Choueifaty notes that until 1971, when the US, which in effect had the world’s global currency, abandoned its convertibility into gold, commodities and other real assets had generally underlain national currencies. 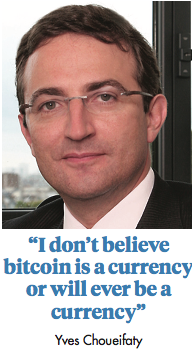 Even sceptics about bitcoin acknowledge that distrust of national governments gave a big initial fillip to bitcoin in its early years. Bitcoin was unleashed on the wider world in 2009, at a time when even mainstream economists feared that governments would devalue their currencies to reduce the real value of their large debts. Generally speaking, however, this has not happened.

One might argue that for all those people worried about the value of national currencies, investing in gold already fits the bill. However, bitcoin enthusiasts point out that, unlike the yellow metal, the total stock of bitcoin is capped in perpetuity at 21m coins – something built into the original code of bitcoin, although at present only about two-thirds of these coins have been ‘mined’. Bitcoins can be ‘mined’ on the internet by anyone running a free piece of software known as a bitcoin miner. By using their computer power to solve complex algorithms, miners can unlock small amounts of the currency.

Sceptics also argue, however, that bitcoin can never be considered a store of value, or a reasonable proposition for institutional investors, when volatility is so high. Volatility has fallen only slightly over the years, to a “still huge” level of about 100%, according to Smit of Cyber Capital.

However, Choueifaty argues that “the scale of risk should never  determine whether it is a good idea or not to invest. It should only determine the size of the investment.” People worried about volatility could dilute this by, for example, assigning $500m to it, but keeping 90% of this in cash and only 10% in bitcoin.

But all these arguments about bitcoin provide no solution to an inherent problem: because the governance of bitcoin is decentralised rather than controlled by central bank, critics say that any flaws cannot be reformed. Smit complains, for example, that the bitcoin blockchain technology can only do about five transactions per second.

Smit is, however, bullish on two other currencies – dash and ethereum – partly because their governance makes it easier to reform them. If bitcoin is a usurper currency, it may be usurped by others in turn.

Looking towards a new Japan