Five years since its introduction, auto-enrolment has been a success. Yet it must keep evolving to maintain its momentum

The UK has added an additional nine million individuals to workplace saving in the past five years.

This impressive accumulation – which will be worth £19.7bn (€22.3bn) in extra annual contributions by 2019-20 – is thanks to the introduction of auto-enrolment, which obliges employers to provide and contribute to a workplace scheme for all eligible members.

Given the limitations of the initial legislation – for example, limiting eligibility criteria and low contribution rates – the government committed to a review of auto-enrolment at the end of 2017.

Far-reaching in its scope, the review was designed to address concerns that auto-enrolment excluded people including the low paid, those with multiple jobs, the self-employed and those under 22.

Auto-enrolment also initially  imposed contribution rates of just 3% and from the outset there was concern that employers paying above the statutory minimum would ‘level down’ to cut costs.

Concurrently, the Department for Work and Pensions (DWP) reviewed employer compliance, take up rates and the proposed contribution increases.

As attested by the statistics above, auto-enrolment is considered a success. However, the policy is far from flawless and the hope is that the review will see automatic pension savings in the workplace evolve to be more inclusive and effective.

Ivan Laws, pensions policy director at the Merchant Officers’ Pension Fund Ensign, says: “Auto-enrolment has definitely improved pensions saving in the UK, but not as much as I had hoped. The biggest success is the sheer quantity of people who have commenced pensions savings, and there has been an increase in the general awareness of pensions and related issues, although much more is required.”

The increase has been met with mixed reviews from commentators, who while welcoming higher rates are anxious that it may have unintended consequences.

The first is savers’ mistaken belief that 8% is adequate to provide a suitable retirement income.

Troy Clutterbuck, interim CEO at master trust NOW Pensions, says: “The reality is that 8% of earnings won’t be enough for a comfortable retirement and there’s a danger that savers will have a false sense of retirement security.”

Increasing contributions further, however, is where the second concern comes into play; that rising rates drive people out of pension saving altogether.

Clutterbuck says: “The point that auto enrolled savers may start to feel the pinch and drop out is when contributions ramp up to 5% and 8%. Navigating successfully through these increases without seeing a significant uptick in opt outs is going to be a challenge that the industry, government and employers need to work on together.” 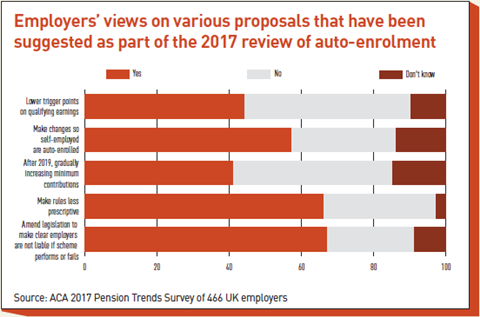 Ultimately, the government would be damned if it does increase contributions and damned if it does not. However, it was always the plan to increase contributions incrementally and this is seen as imperative to success. Organisations including the Pensions and Lifetime Savings Association (PLSA) welcome the incremental approach and hope the government will continue to make such moves until rates reach 12% or higher.

The DWP review also confirmed that legislation will change to allow 18-year olds to qualify for auto-enrolment – a move it predicts will result in additional pension savings totalling £3.8bn by 2020-21. The PLSA says an 18-year-old can accumulate savings 15% greater than a 22-year-old who started at the same time.

Yet the DWP will not remove the age limit until the middle of the next decade, a decision which reflects concern that too much change will risk undermining the positive impact of auto-enrolment.

Malcolm McClean, senior consultant at Barnett Waddingham , says: “It is rather disappointing that the government does not seem willing to contemplate bringing in any of the changes until the mid-2020s.”

He argues that the DWP does not want to ‘upset the apple cart until the current contribution increases have been successfully implemented and given time to settle down’.

The DWP will also start contributions based on the first pound people earn rather than the lower earnings limit (LEL) of £5,876. This means that someone earning £5,000 in three different jobs did not qualify for auto-enrolment despite earning £15,000. This is beneficial for low earners who will now receive a contribution based on their entire earnings.

Clutterbuck welcomes the removal of the LEL, but notes the restrictions on higher earners remain in place.

He says: “With the upper earnings limit still in place, those earning over £45,000 still won’t receive the full headline contribution. All savers should receive 8% so this upper band should also be reconsidered.”

The government was also criticised for not doing more to help the five million self-employed workers in the UK. However, in 2018 the DWP will test several options designed to improve pension saving  for this group.

While the DWP conducts analysis, some commentators fear that the gap between the self-employed and their employed counterparts will increase.

Martin Palmer, head of corporate market management at Zurich, says: “We are creating a rapidly growing new divide between those who are employed, with access to auto-enrolment, and the self-employed. We need to ensure nobody is excluded from the chance to build up a nest egg simply because they don’t work the standard nine to five.”

The UK’s auto-enrolment policy has so far proven positive, yet it is flawed. A policy built on inertia is effective to a point, yet for pension saving to be sustainable the government will need to take auto-enrolment to the next level. That is, engage workers with their scheme, encourage them to take ownership and ultimately end up with an adequate retirement fund.

The UK is one of the world’s richest countries yet its pension system fails to reflect that. The Melbourne Mercer Global Pension Index which ranks the world’s pension systems based on adequacy, integrity and sustainability, places the UK below Chile and Colombia. It has a lower score than European counterparts including Germany, Ireland, Switzerland, the Netherlands and all of Scandinavia. However, while it has much to prove, the UK has bettered its score rising from 60.1 in 2016 to 61.4 in 2017. This was in part thanks to auto-enrolment; a policy which is likely to continue to raise the UK’s position in the index over time.

David Knox, the partner at Mercer who compiles the index, is an advocate of auto-enrolment arguing that it has given the UK flexibility while also “establishing a system which will cover the majority of workers due to the presence of incentives, community expectations and/or individual inertia”.

He adds: “Auto-enrolment in the UK has been successful in broadening the coverage of private pensions and thereby improving the sustainability of the total pension system.”

Knox is clear that the UK may not rest easy, arguing continued improvement in its ranking will only be possible if government increases contribution rates, while employers and participants engage with pension saving.

He says: “The challenge will be to retain this broader coverage as contributions increase to provide more adequate retirement benefits.”