The UK’s Department for Work and Pensions (DWP) has launched a long-awaited consultation on defined benefit (DB) scheme consolidators – dubbed “superfunds” – as the sector grows in prominence without appropriate regulation in place.

In the last 12 months, two commercial DB consolidators have launched – Clara Pensions and The Pension Superfund – as maturing schemes look to de-risk. However, the two vehicles as yet have not written any business.

The consultation document stated: “The current legislative framework does not prevent a superfund setting up and attempting to attract other funds to consolidate. However, there are clear risks in doing so without a suitable regulatory framework to ensure member protection.”

The paper said the government wanted to do more to encourage consolidation, recognising the benefits it can bring in reducing scheme costs per member, enabling more effective investment strategies and improving governance.

It said, therefore, it had three options: to maintain the status quo and rely on The Pensions Regulator (TPR) to oversee them with its existing powers; to legislate to prevent consolidation; or to create a regulatory regime that would work for all stakeholders.

This government chose the third option “to proceed with what is a difficult but potentially worthwhile program to enable a properly regulated superfund consolidation sector”.

However, upon the launch of the consultation, the DWP noted that it already aimed to strengthen the power of TPR to oversee the new, burgeoning sector, and ensure those operating in it passed a fit and proper person test. 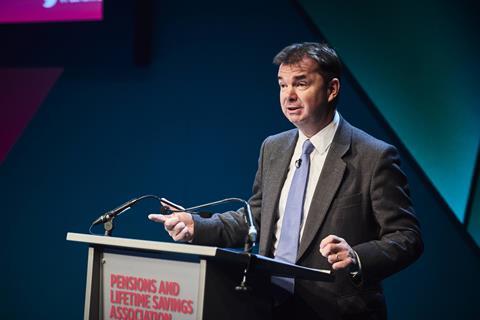 Guy Opperman, minister for pensions and financial inclusion, said: “Well-run superfunds have great potential to deliver more secure retirement incomes for workers while allowing employers to concentrate on what they do best – running their businesses.”

In the 67-page consultation document, the DWP said it was seeking the views of trustees, companies operating pension funds, and other stakeholders in the corporate landscape.

Saron said the momentum behind the consolidation of DB schemes had gathered pace and the publication of the consultation was an important next step.

Luke Webster, CEO of The PensionSuperFund, said there was “nothing in the guidance that is incompatible with our initial transaction” and that it could therefore move to submitting it for regulatory clearance.

The government department is also considering how to build an accreditation scheme for existing DB master trusts such as TPT Retirement Solutions, which it felt did not require authorisation or specific legislation as they were already bound by pension scheme regulation.

The DWP said it preferred a voluntary, industry-led scheme that would raise awareness of these vehicles for DB schemes and was considering changing the name to avoid confusion with defined contribution master trusts.

Opperman said: “We’re clear there needs to be proper regulation, and we’re consulting to ensure we get that right. We’re transforming pensions saving in this country through our radical reforms, and this is yet another innovation which will improve retirement prospects.”

The consultation can be found on the DWP’s website and will close on 1 February 2019.