UK Local Government Pension Scheme: The only certainty is change

After years of uncertainty, UK chancellor of the exchequer George Osborne has signalled his desire for radical structural change among the UK’s local authority pension funds.

Across 101 funds, the local government pension scheme (LGPS) manages £231bn (€316bn) in assets. There has long been a debate within government on how to achieve scale and cut costs, with mergers and a shift to a passive-only investment approach being previously mooted.

Instead, Osborne told the Conservative party conference he would work with the 89 administering authorities in England and Wales to create half a dozen “British Wealth Funds” – in effect encouraging the schemes to pool assets regionally (see graphic) in an effort to increase scale. The chancellor promised the new funds would invest billions in regional infrastructure, thus helping the government fill the shortfall in the capital expenditure budget in the wake of cutbacks.

Discussions have focused on how the LGPS can emulate Canadian and Australian investors – countries where institutional investors have a higher exposure to infrastructure – with mention of the Netherlands, where civil service scheme ABP manages €373bn. Merrick Cockell, chairman of the London Pensions Fund Authority, says it is vital that local authorities partner on investments. “The LGPS is a sleeping giant, and, instead of looking enviously at Canada or Australia, we should get on with creating our own LGPS equivalents,” he has said.

For those under the impression that pooling can be avoided, Joanne Segars, chair of the LGPS Advisory Board, notes that Osborne has let it be known pooling “isn’t optional”. It is now up to the funds to decide how they wish to proceed, with possible collaboration taking the shape of jointly owned funds for specific asset classes such as a passive equity fund in Wales, pooled collective investment vehicles (CIVs) administered by a single authority and standalone companies jointly owned by the funds participating in the CIV, the model pursued by London councils.

Funds located in the south west of England have announced they will collaborate, launching a £19bn CIV that is administered by one of the eight authorities, but overseen by a board of all participants. Avon Pension Fund, where the idea was discussed in September, said the notion of pooling was not ideal and would present problems – such as when individual funds disagreed on how to structure future mandates. But, it said it would be preferable to unnamed alternatives that risked “[leaving] the fund at the margins”. 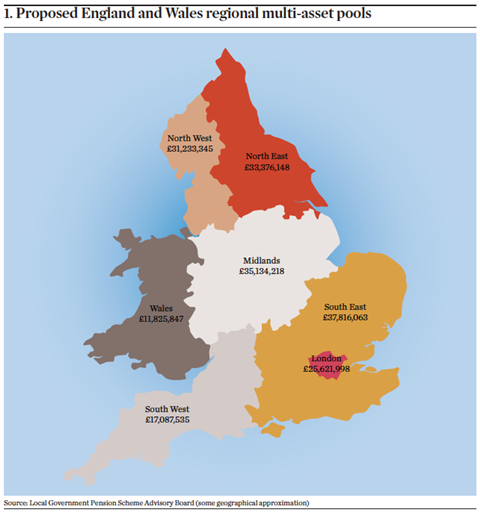 The industry was warned of Osborne’s decision that pooling would be forced without exceptions, even for schemes that had invested in establishing in-house management teams. The current voluntary approach allows Avon to agree a structure, in consultation with funds including the Environment Agency Pension Fund, with which it enjoys a working relationship.

In addition to the sturctural concerns, questions remain about the threat implicit in Osborne’s speech when he noted the lack of investment in infrastructure. While it is true some funds have “little or nothing in [UK] infrastructure”, as the chancellor says, this has as much to do with absence of viable projects as with scale.

The Treasury, for its part, believes the lack of appetite for projects relates to a lack of investment expertise at the LGPS funds and hopes this will be addressed through pooling, forcing upward exposure to infrastructure. In a statement the same day as Osborne’s speech, it added: “The [pooled] funds will follow international norms for investment, meaning larger sums being invested in infrastructure.”

But, unions have voiced concerns the LGPS will come under pressure to invest contrary to beneficiaries interests. “The chancellor shouldn’t use our pension funds as a convenient way of making up for the infrastructure investment that no longer happens,” Unison general secretary Dave Prentis argued.

While “international norms” implies greater exposure to infrastructure would be voluntary, Osbourne’s stated desire to see investments flow towards real assets will increase the pressure on local funds to invest in regional projects they may have previously ruled out.

Additional challenges are posed by the cost of pooling assets, which, while not voluntary, will not be reimbursed by central government. Cost is one of the reasons the south west’s collaboration opted for its CIV being administered by one authority, rather than the route pursued by the London CIV managed by a chief executive and board, separate from the participating funds.

Osborne’s goal of boosting local investment in infrastructure is understandable when looking at the 5.6% exposure the CAD264bn (€192bn) Canada Pension Plan Investment Board has to the asset class, or how Australian superannuation funds participate in deals to acquire airports and ports. But such shifts in strategy cannot be achieved in the short term and without the support of fiduciaries.

The best way to guarantee an increased exposure is to offer up low-risk or financially rewarding infrastructure projects, potentially by reducing the level of construction risk. At a time when the UK government is launching a National Infrastructure Commission to advise on future projects, one could expect further examination of investment guarantees or an infrastructure bank to help growth in the area.