The pooling proposals follow a debate about the merits of full-scale mergers, and whether active management should be prohibited to lower costs. After nearly three years, the government settled on pooling – and instructed councils to make arrangements, or else.

There had been hopes that central government would reimburse the LGPS sector for the cost of the reform. The bills associated with legal advice, and the price of launching tax-transparent Authorised Contractual Schemes to contain the assets, are substantial, especially when the funds have also been told to reduce unnecessary expenditure. Instead, there was mostly stick – with the promise of regulatory underpinning that could see non-compliant funds forced by the Department for Communities and Local Government (DCLG) to pool with a group of its choosing.

Following last summer’s announcement by chancellor of the Exchequer George Osbo rne that he would like to see half a dozen British Wealth Funds, a flurry of meetings ensued, likened by one senior manager at a northern LGPS to “speed dating”. The resulting partnerships began emerging even before the DCLG outlined the final criteria for the asset pools, which include a minimum of £25bn within each partnership.

Those quick to emerge were based on pre-established relationships, such as the Wales-wide pool, or the Brunel Group – a collection of 10 similarly sized schemes, including the Environment Agency Pension Fund and Cornwall Pension Fund – joining up due to their geographic proximity in the South West of the country. Similarly, the cleverly named Access (A Collaboration of Central, Eastern and Southern Shires) pools geographically, and includes Cambridgeshire, Norfolk, and the London CIV – launched well ahead of the DCLG consultation and already investing. It also has the support of almost all London boroughs.

However, another partnership that got under way ahead of the consultation may be in trouble. The Lancashire County Pension Fund and the London Pensions Fund Authority’s (LPFA) £10bn joint asset pool – which has registered with the Financial Conduct Authority and appointed Michael O’Higgins, the former chairman of the Pensions Regulator, as its chairman – has seen its AUM fall short. Despite interest from the Berkshire Pension Fund, it would still fail to reach £25bn. Instead, the partnership may find a home in the £35bn Northern Powerhouse pool, emerging from the Greater Manchester Pension Fund’s (GMPF) partnership with Merseyside and West Yorkshire.

The Border to Coast collaboration, close in size to the GMPF partnership but comprising a large number of smaller funds, led by East Riding, has also met the government’s asset target and emerges as a collection of like-minded LGPSs spread across England. 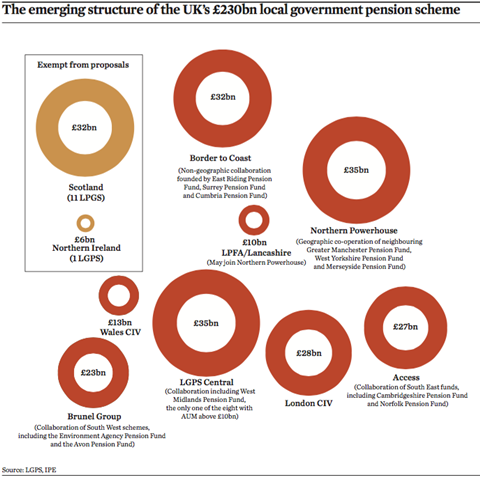 The government’s other request – that the LGPS explain their exposure to infrastructure, with the hope that a more professional local authority system would grow investments to 10% of assets – has already borne fruit. The launch of a joint venture between the GMPF and LPFA, initially investing £500m in infrastructure, is set to double in size to include commitments from the GMPF’s pooling partners.

The pool’s consultation response outlined that the venture could attract more support from other pools and evolve to be either a national infrastructure vehicle or eventually even a co-operatively owned clearing house for projects, as a means of reducing the overall complexity and due diligence of investing in the asset class. Border to Coast is said to be in talks with the vehicle, while the clearing house idea is several years away, the GMPF admits.

Scotland and Northern Ireland are exempt, as the matter of LGPS regulation is devolved. But the last few years have led to discussion among Scottish funds on how to better collaborate on investments. The country’s LGPSs vary in size, from the £15.6bn Strathclyde down to the £263m fund for the employees of Orkney Island Council, and collaboration with Lothian or Strathclyde, both boasting in-house management, could allow the smaller funds to access alternatives at a lower cost.

The next development that asset managers will be watching with interest, once joint portfolios have been tendered and costs for the mainstream assets slashed, is which pools begin building up competence in which areas. Each pool boasts in-house management expertise in equity, alternatives or environmentally conscious investing – the next logical step would be for individual finds to offer their services to others.

The biggest change, however, is likely to emerge in asset allocation, as funds will be liberated from hard caps on investments in limited partnerships, such as infrastructure, as they shift to a less regulated investment strategy based around a prudent person principle.

Even one of these measures – pooling, collaboration on alternatives, or a shift to prudent-person principle – would amount to a revolutionary change for the LGPS. Combined, they pose major challenges but, the government hopes, they will also result in a more agile and well-funded LGPS.