It is important to understand both the similarities and the differences between the UK and the rest of Europe, says Daniel Ben-Ami

• Although there are many similarities there are also significant differences between the UK bond markets and those of continental Europe.
• Liquidity and issuance in the UK are subdued at present.
• The UK is at a more advanced stage of the monetary cycle than the euro-zone.
• Britain suffers from substantial budget and current account deficits.
• Demand from pension funds for long-dated debt means that average maturities are significantly higher in the UK than in the euro-zone or the US.

There is an old and perhaps apocryphal story that the London Times once ran a headline declaring: “Heavy fog in Channel – continent cut off”. The implication is that the UK is somehow separate from the rest of Europe. Britain is at the centre of events and the rest of the continent exists at a distance. There is the UK and then, on the other side of a narrow stretch of sea, there is Europe.

This outlook long predates any quarrels about the EU and it does not necessarily involve any hostility to other European countries. It simply suggests a perspective that sees Britain as somehow different from the nations of the European mainland.

In relation to the bond markets there are both similarities and differences between the UK and the rest of Europe. Clearly both need to be appreciated. But it is perhaps more important to grapple with the differences if the specifics of the UK’s markets are to be better understood.

Certainly both Britain and the other large European economies have substantial and developed bond markets. All of them, to a greater or lesser degree, have also suffered substantial economic problems in recent times. In addition, central banks across the region have engaged in extraordinary monetary policy in recent times. Indeed, at this general level, there is little difference between Europe and the US.

No doubt the most obvious difference between the UK and the euro-zone is that Britain retains its own currency. This has many implications for the bond market. For a start, it means that the euro-zone, as a substantially bigger economic bloc, can have a larger and more liquid bond market. The sterling aggregate bond market (which includes government, government-related, corporate and securitised debt – of investment grade quality) is worth about €2.4bn compared with €9.4bn for its euro-zone equivalent. At present liquidity and issuance is relatively low in the UK market with the high-yield sector particularly thin.

On a more positive note, it means the currency can take more of the pressure of adjustment when the economy is weak. That does not mean, of course, that the UK was entirely unaffected by the euro-zone crisis. For instance, it took part in the bail-out of the Irish economy in 2010. The euro-zone also remains a key trading partner for the UK including in particular Germany, the Netherlands, France, Ireland and Belgium.

Britain’s non-membership of the euro-zone also puts it at a slightly different stage of the monetary cycle. If anything it is closer to the US than continental Europe in that respect. The Bank of England launched quantitative easing (QE) back in March 2009. Since its third round of QE was launched in July 2012 it has stopped extending its asset purchases. In contrast, it was only in March of this year that the European Central Bank (ECB) started its QE programme.

Howard Cunningham, a fixed income fund manager at Newton, says that in the UK, “emergency low rates have gone on for long enough”. In his view the ultra-low rates may no longer be appropriate. He suggests the UK is likely to start raising rates early in the new year.

Cunningham argues that rates are likely to take a slow upward path. In that he is in line with Mark Carney, the governor of the Bank of England, who told the annual central bankers’ symposium at Jackson Hole, Wyoming, in August that: “Policy rates consistent with returning inflation to target will likely need to rise in a gradual fashion and to a limited extent despite robust domestic demand and firming domestic costs”.

In Cunningham’s view the impact of the unwinding of QE could be less than many assume. Since the end of QE is likely to come at a time of economic recovery the reduction in the monetary stimulus could be offset by other forces. For example, it will come at a time of lower government deficits so there should be lower gross Gilt issuance.

Chris Iggo, CIO of fixed income at AXA Investment Managers, suggests the UK may be more prone to runaway inflation at some point. Although weak commodity and energy prices should help keep inflation low for the time being this effect will pass. In contrast, the euro-zone, at least until recently, was widely seen as at risk of deflation. Either effect would of course have important implications for the fixed income markets. 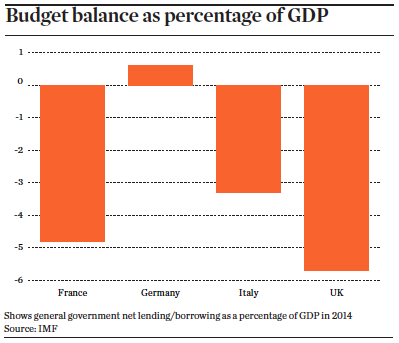 Of course the UK is not the only European country to have its own currency. The same is true of Switzerland and the Scandinavian countries. The difference is that the British economy and the financial markets are on a much larger scale than in these other countries.

From this perspective it is fortunate that the UK government bond market has a much longer average maturity than the US or continental Europe. and the average maturity of UK government bonds is 15.8 years compared with 7.2 years for the US and 8.9 years for the euro-zone. As a result the year-on-year refinancing pressure is not so great. This should serve the UK well in the unlikely event of a buyers’ strike or similar predicament.

This longer average maturity is itself at least partly the result of the greater role of pension funds in the UK bond markets because of hedging and liability-driven investment (LDI). Iggo says for this reason defined benefit (DB) pension funds “are the big players in the long end of the bond market”. In contrast, such pressures are less pronounced in continental Europe. Some countries have moved from a largely state-funded system of retirement provision direct to a defined contribution (DC) system.

Another consequence of the importance of DB schemes in the UK is the greater requirement for liability hedging. Whereas about 29% of UK government debt is in index-linked Gilts the comparable figure for euro-zone government bonds is 4.5%. The downside of this is that the UK would be more vulnerable in the event of high inflation.

Finally, there is a risk that the UK will vote to leave the EU in the upcoming referendum that is due by the end of 2017. Standard & Poor’s downgraded its long-term AAA sovereign rating for the UK from stable to negative on that basis. Its release on the matter stated that: “the plan to hold a referendum on EU membership indicates that economic policymaking in the UK could be at risk of being more exposed to party politics than we had previously anticipated. A potential exit of the UK from the EU – known as a Brexit – poses a risk to growth prospects for the UK’s financial services and export sectors.”

Newton’s Cunningham argues that the effect could be paradoxical. UK bonds could gain relative to equities but overseas buyers could become more nervous about Britain’s fixed income sector.

A Brexit vote would not remove Britain from the continent geographically but it would distance the UK from the region’s main economic and political grouping.