The Border to Coast Pensions Partnership has hired Robeco to perform voting and engagement services.

Through its “active ownership” service Robeco will provide voting advice and support for the £43bn (€48.7bn) public sector asset pool’s actively managed equity holdings – both for internally managed and externally managed assets – and engage on the pool’s behalf.

Another draw was that the research and analysis Robeco carried out for its voting recommendations could be embedded into Border to Coast’s own investment processes, she said.

“We were really keen to find a partner that would be able to help us develop our voice, to deliver the things that both our partner funds and central government had asked us to do,” she added.

Although the voting and engagement mandate was predominantly focused on equities, Elwell said the pool expected it would work with Robeco “to think about how we embed responsible investment in some of the other asset classes”.

Border to Coast has 12 partner local authority pension funds and is in the process of creating a regulated investment company to manage their assets.

It recently joined the Local Authority Pension Fund Forum and became a signatory to Climate Action 100+. It is also a supporter of the Task Force on Climate-related Financial Disclosures and the 30% Club Investor Group, which seeks to increase gender diversity.

The combined funding shortfall of the UK’s private sector defined benefit (DB) pension schemes fell to £86bn at the end of June, according to the Pension Protection Fund (PPF).

The DB lifeboat scheme’s 7800 index showed a reduction of £8bn, or 8.5%, during the month. However, this was still significantly higher than January’s £51bn figure, which was the lowest total deficit recorded by the 7800 index since April 2014.

The aggregate funding ratio across the 5,588 schemes tracked by the PPF was 95% at the end of June.

Andy Tunningley, head of UK strategic clients at BlackRock, warned that equity market gains that had helped raise funding levels might not last: “Schemes should make the most of the sunny outlook while it lasts – while equity markets remained buoyant in June, escalating geopolitical tensions and uncertainty over the viability of the latest Brexit proposal could cause unexpected downpours in the shape of equity market volatility which may remove funding level gains over the last year.

He added that the potential for an increase in the UK’s base interest rate meant there was a risk of increased funding costs for UK schemes exposed to floating rate derivatives.

“Financing costs are set to increase and trustees should ensure they have prepared adequately for the change in season by giving thought to using their spare collateral to earn additional return, such as through absolute return bond funds or securitised assets,” Tunningley said.

Boris Mikhailov, investment strategist at Aviva Investors, agreed that pension schemes should “brace themselves for an even choppier ride”.

“Without a clear game-plan, most schemes will be none the wiser if markets start moving against them,” he warned. 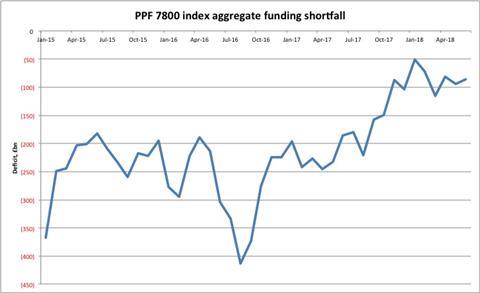 The UK’s Institute of Engineering and Technology (IET) has sealed a £50m pension fund buy-in with Pension Insurance Corporation.

The transaction covered 300 previously uninsured members of the IET Superannuation and Assurance Scheme.

According to Hymans Robertson, which advised the scheme’s trustees, the deal was struck at “favourable” pricing in the second quarter of this year. This led to “a material improvement” in the scheme’s funding position.