Calculating and administering changes to defined benefit (DB) schemes as a result of this month’s ruling on guaranteed minimum pensions (GMPs) could cost schemes more than any additional payments to members, according to JLT Employee Benefits.

The UK’s high court ruled last week that GMPs – adjustments made to compensate some DB scheme members for changes to the state pension – were in breach of gender discrimination laws as they paid men and women at different ages. As a result, pension funds must recalculate benefits accrued between 1990 and 1997.

Last week estimates for the cost of the changes ranged from £15bn (€17bn) to £20bn, but Charles Cowling, chief actuary at JLT Employee Benefits, said company profits could be hit with costs as high as £32bn in total, depending on how the costs are reported on company balance sheets.

He continued: “We argue that as this Lloyds Banking Group case only confirmed what was already a legal requirement, nothing has changed – other than we now know how the courts want us to do the calculations. This cost should therefore go through company accounts as an ‘actuarial loss’.

“But the major audit firms may think differently – they are currently discussing the options and hoping to come to a consensus view on their preferred accounting treatment.”

Cowling claimed that, if auditors applied the cost to profit and loss statements rather than actuarial losses, “it could see £6bn wiped off the government’s anticipated corporation tax receipts”.

Staff at the University of Manchester are to strike over plans to shift the pension scheme for cleaners, caterers, administrators and security staff to a ‘career average’ plan, according to their union.

The university also plans to close the DB scheme to new members and roll out a defined contribution (DC) plan. 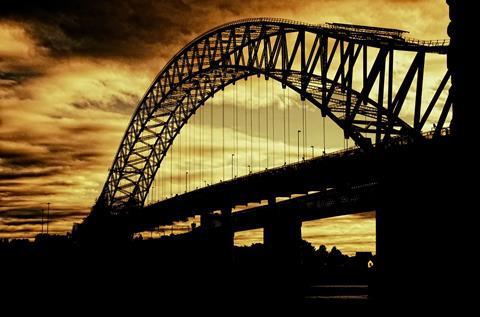 The Silver Jubilee Bridge in Manchester

Unison, the UK’s biggest union, claimed in a statement that existing staff earning £22,000 could lose out on more than £1,000 a year in retirement income.

The union said 89% of members who voted in a recent “consultative” ballot opted in favour of strike action. A formal vote was scheduled for today with the strikes slated for next month.

Under a career average DB plan, members’ annual benefit is based on their average yearly salary and length of service, rather than the wage they earned when they left the scheme or retired.

The University of Manchester pension scheme is separate to the main national higher education fund, the Universities Superannuation Scheme. Lecturers and teaching staff staged walkouts earlier this year to protest against proposals to shift entirely to a DC arrangement.

More than half of small and medium-sized businesses have switched their auto-enrolment pension provider less than five years since pension provision was made mandatory for them in the UK, according to a survey.

DC master trust Welplan Pensions polled 500 senior staff at smaller companies and reported that 54% had changed their provider since their original staging date.

In addition, 49% said they planned to switch provider in the future, with 20% of those questioned saying they would do so in the next six months before the next mandatory contribution increase.

Two in five respondents cited value for money as a reason for switching, while more than a third cited investment performance and ease of transacting. Customer service, investment choice and communication quality were also cited.

Companies with less than 250 staff have been required to automatically enrol them into a workplace pension scheme since 1 April 2014.

Bruce Kirton, chief executive of Welplan, said: “There has been huge focus by master trust providers on cost at the expense of value. This research blows that assumption out of the water: people also want good investment performance and robust systems that streamline administrative challenges.

“Smaller business owners are savvy and well-advised. They know what to look for in their auto-enrolment provider and how to get their needs met. Everyone in the pensions industry should now see switching as the norm. Employers want the best for their employees – and that’s exactly how it should be.”