The Pensions Regulator (TPR) has hinted that some trustees could be forced out of their roles if they do not meet minimum governance standards.

However, one result of the new approach “might be that we lose some trustees”, she warned.

“We are going to put a lot of emphasis over the next few years on what we can do to improve standards of governance, because we know they are not as good as they should be,” Frobisher said. “This is not because we are trying to raise the bar to a higher standard. This is because there are lots of schemes that are not meeting the standard that’s required.”

She said there remained “significant pockets” of poor governance despite years of work on trustee training and support from TPR and other bodies. As a result, Frobisher said the regulator would be “tougher” on governance standards in the future.

In such a situation, she said, the regulator would be interested in proposals for consolidation of schemes to improve overall governance. Frobisher was speaking at an event to launch the Pensions and Lifetime Savings Association’s report into its “superfunds” consolidation proposal.

Auto-enrolment helped push the number of people actively saving in an occupational pension scheme in the UK to an all-time high by the end of 2016, according to the Office for National Statistics (ONS).

There were 7.7m people in private sector schemes at the end of last year, the ONS reported, up by 40% from the end of 2015. Including public sector schemes, total active membership reached 13.5m. 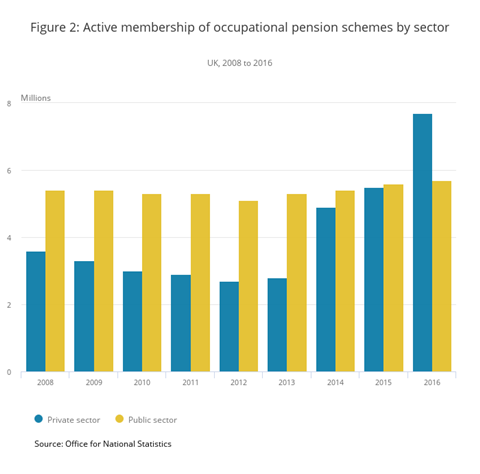 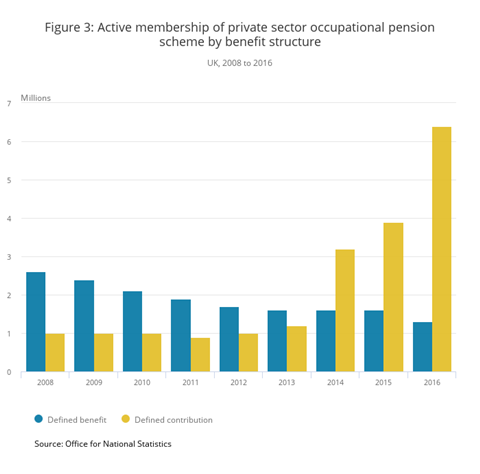 The figures coincided with the fifth anniversary of the launch of the UK’s auto-enrolment regime.

Chris Noon, partner at Hymans Robertson, said: “Auto-enrolment has clearly been a success in increasing the number of people saving for retirement. The challenge now is to ensure that we don’t see significant numbers opting out over the next couple of years as minimum contributions increase to 8% of pay in April 2019.

“Even if we can avoid high levels of opt-out, at 8% of pay, minimum contributions will not be sufficient to provide adequate incomes in retirement. Ideally, we need to see overall saving rates in excess of 15% of pay and begin to set expectations of working lifetimes.”

David Taylor, general counsel at the PPF, said: “While the risks we face are significant, we’re in a strong financial position and we’re still on track to meet our long-term funding target. As a result, we’ve been able to set a levy estimate for 2018-19 that is 10 per cent lower than last year. In doing so we have, as always, sought to recognise levy payers’ desire to limit costs while maintaining an appropriate level of protection given the risks we face.”

The PPF also launched a consultation on “a small number of additional proposals” surrounding the levy calculations.

“Collectively these changes will improve the risk reflectiveness of the levy,” the PPF said in a statement. “If these rules were in place now around two in three schemes would have seen a lower 2017-18 levy, with around one in five schemes seeing an increase. SMEs would have seen an aggregate fall in levy of around a third.”

However, consultancy LCP warned that some of the UK’s biggest companies could see an increase in the amount they pay to the lifeboat scheme. Larger companies without a credit rating were expected to see higher bills as part of a number of changes to the PPF’s levy rules.

LCP said the changes would “result in various winners and losers across the spectrum of sponsoring employers” depending on their circumstances.