US President Donald Trump has focused on the trade imbalance between the US and China as a key issue of his foreign policy. It also helps his domestic image tremendously as a strong and powerful leader, able to push through an ‘America First’ agenda as the country girds itself for the 2020 presidential elections. But support for his anti-China stance lies not only with his core Republican fanbase. It also appears to be growing among both Democrat politicians in the US as well as European nations which are themselves subject to Trump’s tariffs.

Some have even presented the rise of China and the fear this inspires in the US as a modern re-enactment of the Peloponnesian War almost two and a half thousand years ago. Back then, the established power of Sparta ended up fighting a war against the rising power of Athens. The story was immortalised by the Athenian historian Thucydides in his classic account of the conflict.

US views on China have certainly hardened over the past few years. “The view that China has not evolved as quickly as we hoped initially is gaining ground,” says Christopher Smart, head of the Barings Investment Institute and former economic adviser to President Barack Obama. However, Smart adds a note of caution. “If lots of people quote Thucydides, I am a bit suspicious. It is a little facile to think that because there are two big countries competing, they will inevitably go to war”.

Smart sees three key questions that Trump has raised that were also of concern to presidents Obama and George W Bush before him. First, the lack of openness of Chinese markets to US and other foreign firms. 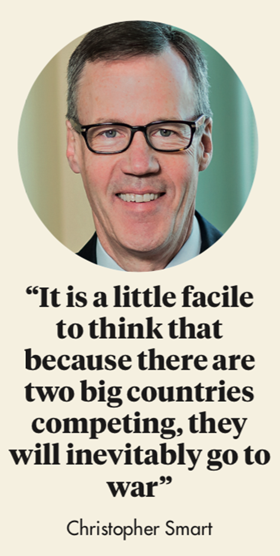 Second, the forced transfer of technology and the protection of intellectual property.

The response of the US to challenges has given rise to what Karen Ward, chief economist at JP Morgan Asset Management, sees as three areas of dispute. She starts with the matter of the fairness of the US tariffs. In her view, the US has a point in making them. “The relative tariffs in China are higher than in the US and that applies to trade between the US and Europe as well,” she says. “The US charges 2.5% for European car imports while Europe charges 10% for US car imports.”

In the case of intellectual capital, Ward makes the point that when China joined the World Trade Organization in 2001 it was treated as an extremely poor country. The rules were set accordingly, around the idea of foreign aid, similar to those being applied to many African countries today. The question is whether such rules are still appropriate for China today.

The third, and perhaps most controversial area, is which country is going to be the global leader in technology. Traditionally it has been the US but China is moving away from low-value manufacturing to directly threaten the US dominance.

As Eric Winograd, chief economist at AllianceBernstein, points out, how these issues are regarded depends on the viewer’s perspective. China, with its long-term viewpoint, will do whatever it takes to raise its level of development. Maintaining access to global trade is central to achieving this goal.

The Trump administration, by contrast, has several objectives, some relating to security and hence technology transfer. The focus on Huawei, the Chinese telecoms giant, reflects these concerns as well as providing a useful negotiating point for trade discussions.

The US electoral cycle, by its nature, forces short-term objectives on both the main political parties. “Currently, the Democrats are doing whatever possible to get Trump to lose the next election,” says Winograd. He argues that Trump functions best when he has an enemy he can point to, real or imaginary. “It is likely that, at some point in the election cycle, he will attack China’s trade imbalance with the US.”

Trump can afford to engage in such rhetoric because trade is less important to the US economy than it is to China’s. 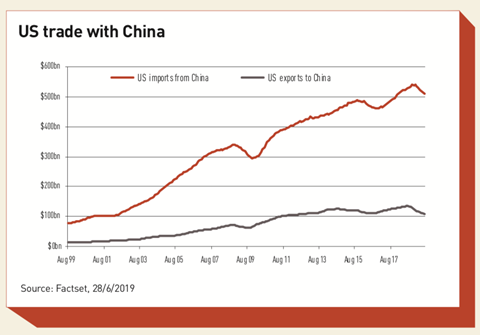 Exports and imports together account for 25% of the US economy but 40% of China’s and 80% of Mexico’s. Canada and Mexico had no choice but to agree to US-demanded changes to the North American Free Trade Agreement (NAFTA) quickly, despite the regional grouping being established by the US. “At the end of the day, any changes to trade agreements with China are likely to be beneficial for the US, because the US has more leverage in the negotiations,” says Winograd.

It is difficult to predict the future with such a multi-faceted relationship as that between the US and China. But it is clear that China’s President Xi Jinping and President Trump both want a deal – the question is when. As Alessia Berardi, deputy head of macro-research at Amundi, points out, in the short term, any deal is unlikely, given the rhetoric. 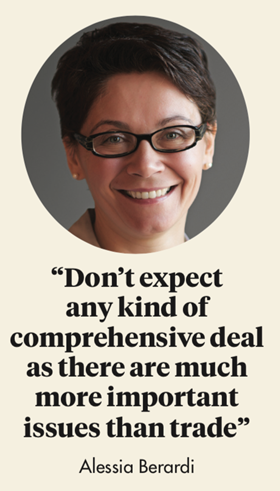 The timeline is uncertain, but it has to be politically convenient for both leaders to sell domestically. For Trump that means it is driven by the dynamics of the 2020 electoral campaign, which suggests any deal is unlikely this year but in 2020 it is an even more distant prospect. The question is the kind of deal that will eventually be decided upon. “Don’t expect any kind of comprehensive deal as there are much more important issues than trade,” says Berardi.

A deal on trade may be agreed but the bar is higher with the concerns over national security posed by Huawei. The Trump administration can produce more detailed guidance allowing US companies to export goods suitable for consumption which do not threaten national security. The Chinese telecoms firm may also be fined for its previous trading with Iran, breaking US sanctions. For any deal to be agreed, the issues relating to Huawei need to be resolved in a face-saving manner for both presidents.

When two behemoths fight, the whole world trembles. Countries, companies and investors are already reacting to the uncertainties. The pressures on the global trading system, and the shifting balance of opportunities and risks, are increasing.

Vietnam, says Berardi, is clearly one of the beneficiaries from trade sanctions with China. But leakages are also occurring. “US authorities are now complaining that many of the exports labelled as originating from Vietnam look as though they actually came from China,” she says. Europe has been signing free trade agreements with countries in the region such as Vietnam, with agreements with Indonesia and Thailand in the pipeline.

“It is in Europe’s interest to move closer towards other countries in the region and to sign as many free trade agreements with them as possible,” says Berardi. As she points out, the US ban on semi-conductor exports to Huawei will hit European manufacturers as well. German factories that are closely integrated into the US-Huawei supply chains have been penalised by the US trading restrictions. But what is clear is that the increasingly protectionist environment will have a painful impact for all countries around the world.

The world seems to be retreating from the globalisation trend of the recent past. Adapting to the new environment will be a challenge for everyone.