10
US Outlook: Walking a tightrope

US Outlook: Walking a tightrope

The Fed is trying to pull off a record-setting high-wire act – without a safety net, writes Christopher O’Dea

• Persistent low yields have distorted the fixed-income markets and made analysis more difficult.
• Bond inflows from savers and institutions will help keep rates low.
• The return to higher rates will be slow and test the Fed’s ability to balance domestic and global factors.

At this summer’s Wisconsin State Fair, Nik Wallenda took a 30-minute stroll from one side of Milwaukee County Stadium to the other. But it was not an ordinary walk. Wallenda is the reigning scion of a family of legendary tightrope artists, and this summer’s walk, on a high wire 10 stories above the ground, set a distance record.

The feat illustrates the challenge facing the US fixed income market and its ostensible masters at the Federal Reserve Board – how to move from an era of historically low interest rates to a more normal regime that restores the income-producing capability of bond portfolios.

Like Wallenda, the Fed is trying to pull off a record-setting high-wire act – without a safety net. While the US fixed income market had long been expecting the Fed to start raising rates, the summer’s financial crisis changed the long-term outlook by taking away much of the Fed’s room for manoeuvre. The US economy clearly warrants a modulated return to higher rates; but China’s economic slowdown and currency devaluation, the collapse of emerging market bond and equity markets as Chinese weakness slashes commodity demand, and a sharp decline in global dollar liquidity have all made the Fed’s job tougher, and virtually ensure that this tightening cycle will be a long one.

For US fixed income markets, a ‘new neutral’ is emerging – an environment that promises another extended period of adjustment to historically unprecedented circumstances, this time a slow-growth economy at home, declining liquidity in bond and dollar markets, and potentially destabilising events outside the country.

As the interest rate tide turns, Treasury, investment-grade corporate and high-yield bonds each face unique challenges as the credit markets adjust to a rising cost of capital – which is expected to prompt corporations to invest in capital projects to avoid higher rates in the future – and competition from alternative credit providers eager to supplant traditional bank loans. But in the end, slow growth and secular savings flows will keep inflation and rate rises in check, and bonds will retain a significant role in institutional portfolios, as an income source and a safe haven.

The summer swoon in financial markets complicated the path the Fed must take as it raises rates. “When you had [a] strong domestic economy, which you still do, you had [a] pretty neutral international economy and the financial markets were in relatively good shape,” Mohamed El-Erian, chief economic adviser for Allianz, said recently. Now the second two factors “have turned violently against the Fed,” he added, limiting its ability to act on US domestic economics. “If the Fed makes a mistake, it will end up making a mistake that will spill back on to the US economy.”

One of the main concerns on the fixed income front is the sharp decline in currency reserves at emerging market central banks, says Michael Shaoul, CEO at Marketfield Asset Management (see figure). This ties together several major trends, he says, including China’s economic slowdown, the subsequent slowdown in commodity-based emerging economies, and China’s devaluation of the renminbi. Central banks seeking to defend their currencies began selling dollars in 2014, marking the first decline in dollar reserves at foreign central banks since 2004; Fed bond-buying in the late stages of QE3 was enough to offset the decline, but in the first eight months of 2015, total dollar liquidity shrank by nearly half a trillion dollars. The effect is “quantitative tightening,” Shaoul says, reducing the pressure on the Fed to raise rates.

Underlying that, technical factors are weak in economies around the world. The US domestic economy has warranted a rise in rates for some time, El-Erian contends, but economic and financial events outside the country have stayed the Fed’s hand, leading to a cautious approach as the US central bank carefully weighs a broad set of factors outside the country. While slow growth abroad could undermine the US economic recovery, it is not likely, according to El-Erian: “My baseline is that the US doesn’t get derailed by what’s happening outside. It can continue to grow at 2.5%, but it’s not going to achieve escape velocity, unfortunately.”

As it raises rates, the Fed needs to ensure that its increases do not add to global financial instability, and to avoid “strengthening the dollar too much, too early”. That would cause additional stress on emerging market countries and companies that have issued dollar bonds. Participants expect a long tightening phase, with swap markets in early September pointing to a pause of as much as 12 months between the first hike and the second.

Ultimately, fixed income investors are not in for a big rate shock. According to PIMCO economic adviser Joachim Fels, the 10-year US Treasury rate will be effectively capped at 3% in the coming year by inflows to bonds from savers around the world. “The global savings glut is here to stay and actually more likely to increase than ebb,” Fels said in a report in early September. Savings trends are “important to understand why global rates are as low as they are”. In Europe, Goldman Sachs says, organic growth in AUM in the fund market has outpaced that in the US by a factor of three over the last three years. Low and sometimes negative deposit rates are pushing investors into investment products, including relatively conservative fixed-income funds. 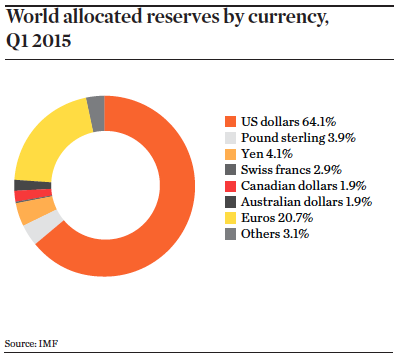 Institutions also appear likely to ramp up demand for US Treasuries as they seek a safe haven from financial market volatility. The California State Teachers’ Retirement System (CalSTRS), one of the world’s largest pension funds with $191bn (€171bn) in assets, started to consider a consultant’s asset allocation proposal at its August meeting that included a recommendation to shift up to $20bn, or 12% of its portfolio, away from stocks, real estate and private equity and into a new risk-mitigation strategy anchored by long-duration US Treasury bonds.

With all those forces keeping interest rates in check, fixed income investing is becoming harder, says Paul Brain, fixed income investment leader at London-based Newton. “Fixed-income markets are more difficult to analyse because of these distortions,” he says. “If you believe these distortions are not going to go away, you just need to get on with the job and invest.” Overall, he continues, “if you believe that negative interest rates are here for some time, then the market is probably getting close to being fairly valued”.

What will happen when rates rise? “The curve will flatten, with the front end setting off the long end,” says Brain. “Once investors realise that there isn’t an inflation problem, we think yields will start to stabilise and come back again, so we see the long end of the Treasury market as a place to seek opportunity,” he adds. This could be balanced with some short positions at the front end of the curve. Newton’s Global Dynamic Strategy headed into the final months of 2015 having trimmed positions on emerging market debt to just 7% of the portfolio and high-yield energy bonds to about 5% of assets.

In its latest fixed-income market outlook, BlackRock notes that US Treasuries appear closer to fair value than they have in several years, although in the event of rate backups the sector “could represent a decent opportunity, particularly relative to core euro area rates”. BlackRock adds that high-yield continues to be a core holding, and it has been “opportunistically looking at long-end investment grade on backups” in market rates for corporate bonds. In the corporate market, the firm notes significant divergence in the credit rating spectrum. Bonds rated BBB- are holding debt/equity levels steady, while higher-rated credits have begun to releverage. The divergence “is part of a broader dynamic with fundamental trends in high-yield corporations still appearing positive”.

While it is too soon to predict a smooth exit from a long historically accommodative monetary policy with any certainty, the Fed seems committed to a cautious approach to limit market upheaval, keeping its options open in the face of global economic weakness by emphasising the data dependency of its decisions and the intention of achieving a shallow trajectory of hikes.

Traversing that path will require the Fed to take each step as carefully as Nik Wallenda. After all, in a high-wire act, balance is everything. On an Evestnet webinar in late August, BlackRock fixed-income strategist William Rodriguez suggested the Fed is up to the task. As rates rise, “the pace will be benign enough to not be ultimately market-disruptive”, he said.

• Treasuries: Near fair value, opportunities are in the long end as the yield curve flattens. Look for rate backups to adjust positions. Long-term savings flows will cap the 10-year rate at 3% during 2016. US rates becoming more tethered to economic indicators under a “data-dependent” Fed.  Still a safe haven, watch for more institutions to seek refuge in Treasuries. Safety bid may be offset by income fund selling.

• Investment grade corporates: Crosswinds are blowing. Investment grade companies have begun adding debt to balance sheets in the past year. For now the debt-to-profit ratio at non-financial corporates is running well below its 30-year average. And economic growth is supportive of credit. But some companies have resumed pre-crisis practices of weaker covenants. Look for risks to rise over the next two years. Some key managers are overweight but warn to position selectively.

• High yield: Risk spreads soared to 300 plus basis points to presage the summer rout, but still shy of the 620bp spreads seen in 2008. A core holding for some large portfolios and managers as high yield borrowers maintain leverage levels. Energy remains treacherous territory, though some can withstand low commodity prices. Some business models are getting stretched; expect an uptick in defaults in next few years.