The Universities Superannuation Scheme (USS) gained 20.1% in 2016-17 and cut its investment costs but was unable to stop its deficit rising substantially, according to its annual report.

The liability increase was caused primarily by a falling discount rate and lower yields on index-linked Gilts, USS said.

The £17.5bn shortfall could lead to a revised deficit recovery plan and higher employer contributions, once a formal actuarial valuation is completed later this year. The scheme must also submit its recovery plan to the Pensions Regulator.

Bill Galvin, USS group chief executive, said the scheme was reviewing its expectations for future risks and returns “from first principles”. He said this would feed in to conclusions about the deficit and future funding, to be negotiated with employers and published in September.

The scheme generated 12% a year in investment returns over the course of the past five years, the annual report showed, outstripping its benchmark and liabilities.

Galvin said the long-term performance of the scheme remained “strong”, adding that he expected USS’ portfolio to outperform liabilities in future. 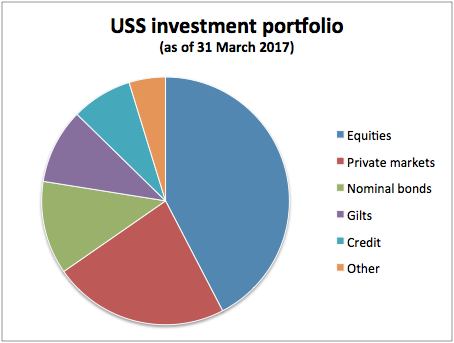 Roger Gray, chief investment officer, added: “The scheme’s assets generated exceptional absolute returns over the past year. We underperformed however versus the strategic benchmark due to underweights in index-linked Gilts and US equities, with the portfolio focused on assets expected to outperform in the long-term.

”We are confident that the breadth and diversity of assets and capabilities deployed for the scheme will continue to pay off over longer periods.”

USS estimated that it had added £1.1bn to the scheme’s net value through active management.

During the 2016-17 financial year, USS also managed to reduce its investment costs by seven basis points. The total cost was 32bps – an improvement of 15bps compared to March 2014. Nearly three-quarters (73%) of the scheme’s investment portfolio is managed by its in-house team.

In October USS launched its first defined contribution (DC) proposition, primarily aimed at those earning pension contributions above the scheme’s cap. At the end of March it had £99.2m invested across 14 DC investment products.