1
What next for US Treasuries?

• Experts expect US Treasury yields may reach 3.75-4% by the end of 2019 but the forward curve for Federal Funds suggests a lower rate
• Wage inflation pressures will be key to coming Federal Reserve hikes
• The US Treasury needs to sell increasing amounts of bonds to pay for its expanded borrowing costs
• Low interest rates from the European Central Bank and the Bank of Japan have helped to keep the US rates well below equilibrium

A consensus on the direction of 10-year US Treasury rates is not obvious, because the answer reverts to a further question: whose consensus? Strategists, economists and other informed professionals have a particular view. The market itself, however, expresses a more diffuse and different opinion.

Larry Hatheway, chief economist and head of GAM Investment Securities, casts his vote with the “talking heads”. He and fellow experts expect Treasuries to reach 3.75% by the end of 2019, or possibly even 4%. The market, meanwhile, is sceptical, as is reflected in the forward curve for the short-term federal funds rate. Still, as Hatheway points out, “the market has been consistently wrong since former Fed chief Yellen began to normalise and move rates higher”. Janet Yellen first raised rates in 2015, turning a corner from ultra-easy monetary policy.

Guided by the market’s consensus, on the other hand, Brian Nick, Nuveen’s chief investment strategist, expects the central bank to hike only twice in 2019, failing to fulfill its more hawkish rhetoric. “The market doesn’t believe the Fed, and neither do I,” says Nick. That looks at a time period just when fiscal stimulus would be starting to wear off, so any rate hike would act like throwing cold water on smoldering embers. He adds: “It’s hard to see enough positive shocks from everywhere to provide dry kindling to the economy to overheat it.”

Taking the projection a step further, Kevin Giddis, head of fixed income at Raymond James, says the Fed is likely to pull on its levers too hard, pushing the economy into recession and flattening the yield curve. An inverted curve is often seen as a harbinger of recession. “Jerome Powell’s Fed is more hawkish than Janet Yellen’s, so he may favour more hikes than the economy will bear,” Giddis says. But he adds that, if political gridlock slows growth, the Fed might prove more restrained.

With expectations for continued growth and employment fairly well accepted, what alternative scenarios could spur the Fed to a different course of action? “While not our base case, accelerating wage growth without corresponding productivity gains could push inflation higher and force the Fed to act more aggressively,” says Michael Stritch, chief investment officer at BMO Wealth Management. He hedges his bets: “On the flipside, an escalation of the trade war with China could ultimately cause the Fed to take a more dovish stance.” 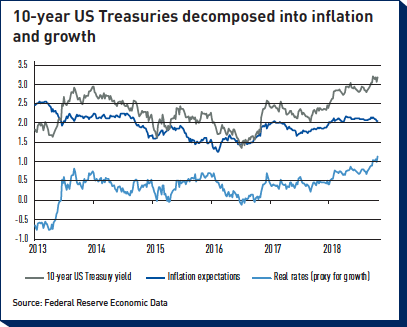 Higher short-term rates do not have an automatic effect on longer-term levels. In theory, one might expect a central bank’s monetary policy to advance in lockstep, but the actual relationship proves weaker

and more variable. Besides, that connection diminishes the longer the maturity of a given security. In today’s case, though, rates are more likely to operate in tandem because of the pressure of wage inflation, which appears to be the central driver. “The other factors are just noise,” says Giddis.

Assume first, that core inflation rises gradually, with consumer price inflation moving up and perhaps modestly overshooting the Fed’s stated target of 2%. Now consider an alternative view, that inflation runs faster and further above the target. “As that becomes apparent, it will undermine other assets, especially equities. The combination of Fed tightening and a bond market sell-off may be pronounced, but it may also be short,” says Hatheway.

Foreigners’ bond purchases from around the world have been a significant element in keeping US interest rates low for a protracted period. That pattern may be shifting. Early in 2018, Europeans and Asians began selling US fixed-income securities, especially US corporate bonds. “That caused a wake-up call, with less global liquidity. When different pockets of investors are moving funds around, it can have an exaggerated effect inside the bond market,” says Tom Graff, head of fixed income at Brown Advisory. For example, as hedging costs between euros and dollars move, Europeans’ desire to invest in dollar assets waxes and wanes.

The US Treasury’s need to sell bonds to pay for expanded government borrowing keeps building. “While there is little risk that yields would sky rocket, unhedged US bonds might become less attractive to global investors,” says Graff. “But if yields are priced right, liquidity is available for arbitrageurs, and volatility will create opportunity for portfolio managers.”

“The Treasury has been coming with larger and larger auctions, which in itself would have an impact on the ability of the US to attract both domestic and foreign buyers of its debt,” says Giddis.

The normalisation of monetary policy includes quantitative easing among other tools. During the economic boom that followed the second world war, when the US was at full employment and the Fed was raising rates, “you’d be hard pressed to find the 10-year Treasury yield so far from equilibrium”, Hatheway says. In other eras, it would have been more likely to range around 4-5%. Yet the current yield, just north of 3%, must reflect, to some degree, the distorting behaviour of the European Central Bank (ECB) and the Bank of Japan, in keeping US rates 100bps below equilibrium.

Meanwhile, $60bn (€53bn) is still rolling off the Fed’s balance sheet every month, as the bank unwinds its own QE programme. Now the economic emergency of the credit crisis years has passed, the Fed will probably let the Treasuries keep shedding, even after it stops raising interest rates. Stritch says the Fed “will take a pragmatic approach, as it watches its rate increases filter through”.