World Trade: Is protectionism on the rise?

Developments in the US and Europe presage a substantial change in the conduct of international trade, finds Daniel Ben-Ami

The system of rules and regulations that has governed world trade for decades is under threat. In both the US and Europe it is facing serious opposition. At the very least, this shift is likely to mean a substantial change in the way international trade is organised. In the worst-case scenario, possible although far from certain, there is the danger of an all-out trade war.

To understand what is happening it is necessary to cut through some entrenched misconceptions. There are important differences as well as similarities between what is happening in the US under President Donald Trump and developments in Europe. It is also important to recognise that the system of world trade that already exists, despite the rhetoric, is far from free.

Perhaps the clearest threat to world trade comes from the Trump administration. During the presidential election campaign, the then candidate Trump made great play of to need to “put America first”. In his view, both the American economy and American workers were suffering as a result of badly negotiated trade agreements. A particular focus was on two out of three of America’s largest trading partners: China and Mexico (with Canada being the other one and the European Union being larger if it was counted as one bloc). The two emerging economies were the subject of some of candidate Trump’s fiercest trade rhetoric.

Trump was also hostile to multilateral trade agreements. He has called for the renegotiation of or withdrawal from the North American Free Trade Agreement (NAFTA), the agreement between the US, Canada and Mexico that came into force in 1994. He was also a vocal opponent of the Trans Pacific Partnership (TPP) a proposed agreement between 12 Pacific Rim countries, including Japan and the US, but excluding China.

The tricky question with Trump in the White House is how far he will go in implementing the economic nationalism of the campaign. One possibility is that he will use the threat of action to try to pressure China and Mexico to give the US more favourable trade terms. Another is that he follows through on the threat of punitive action and risks escalating conflict with important trading partners. China, in particular, has made it clear that it will retaliate if it is subject to what it regards as unfair action.

Trump’s trade appointments suggest a tough line. Robert Lighthizer, the official US trade negotiator, is a long established critic of China. Trump has also created a National Trade Council under Peter Navarro, another hawk in relation to trade with China.

But before assuming there is only one way Trump can go on trade, it is necessary to put his stance in a broader context. Hillary Clinton, Trump’s rival in the presidential election campaign, is opposed to TPP even though she supported it initially. Bernie Sanders, Clinton’s rival as presidential candidate for the Democrats, was also opposed to trade deals. It is also worth remembering that Barack Obama was critical of NAFTA during his 2008 presidential campaign. 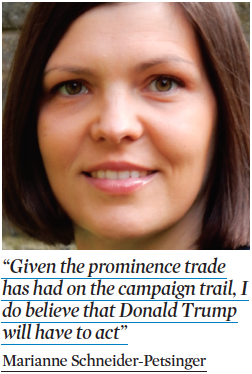 From this perspective, the protectionist rhetoric favoured by Trump should be seen as a more aggressive version of the views held by other presidential candidates. It seems that much of the American political class and a good portion of the public has at least some affinity for protectionism. The question is to what extent Trump is likely to become more pragmatic now he is in office. Escalating a trade conflict with China in particular might play well at home but it could easily have damaging consequences for the US economy.

No one can be certain about the trajectory of the Trump administration but there are some disagreements between experts on the likely course of action. Chad Bown, a senior fellow at the Peterson Institute for International Economics in Washington DC, is wary of making predictions at this early stage. “We will only know if their trade policy actions and choices match the rhetoric and words once they are charged with the responsibility of conducting US trade policy,” he says.

Marianne Schneider-Petsinger, a fellow at the Chatham House think tank in London, says “given the prominence trade has had on the campaign trail, I do believe that Donald Trump will have to act”. She expects Trump to end up renegotiating NAFTA rather than pulling out entirely. In addition, she points out that if the US does not ratify the TPP it will fall, in any case. 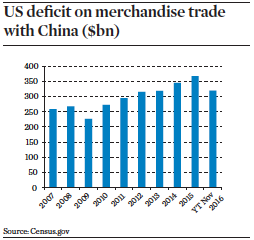 Moving over to Europe it is possible to see some similarities between Trump’s attitude to trade but also some important differences. For a start, the rhetoric of the leading campaigners for Brexit was not explicitly protectionist. The official line was that the UK would be better off if it negotiated its own bilateral trade agreements with other countries.

In some ways, however, it was more far-reaching. The UK voted to leave the EU in its referendum rather than the debate simply being a negotiating device to get better terms from fellow member states. It should also be remembered that although trade relations are part of the EU, its remit is broader. It also represents at least a step towards economic and political integration.

It looks certain that the UK will be locked in exit negotiations with the other EU countries for a while. Nevertheless there is a strong case that they could have a damaging impact on the UK. Jeremy Lawson, the chief economist at Standard Life Investments, says the biggest risk to trade is “uncertainty on what future arrangements could look like”. For example, UK financial services firms with connections in mainland Europe could locate some of their activities in Dublin, Frankfurt or Paris. This would be a hedge against the possibility of Brexit having a negative impact on their business.

Finally, it will be important to watch the outcome of the French presidential election in the spring. In particular if Marine Le Pen of the National Front wins. Although most commentators see this outcome as unlikely, it could mean an exit from the euro-zone or the EU. Recently Le Pen seems to have toned town her rhetoric but it is hard to be certain what she would do in practice.

In Lawson’s view, it would be immensely damaging if Le Pen did follow through on EU withdrawal. “You cannot scramble that egg without pretty disastrous near-term consequences,” he says. However, he points out that even if Le Pen did win the presidency, her power would probably be held in check by a centre right national assembly.

Marianne Schneider-Petsinger argues that even if Le Pen does win, it is unlikely that trade will be her priority. “The tendencies and risks for protectionism are certainly there. But the larger question of what it means for European integration more generally is a much more pressing one,” she says.

It is important to recognise that what exists at present is not really free trade. Although it is true that tariffs are much less important than they once were, there are many other forms of protectionism. These include subsidies for domestic companies, preferential procurement for domestic firms and the imposition of standards to make it harder for foreign exporters. These and other such measures favour domestic firms at the expense of foreign competitors.

For that reason, some economists, including Bown, argue that free trade agreements are probably better described as offering preferential treatment to other parties to the pact. “Certainly, the outsiders to the agreement would not think of them as offering ‘free’ trade,” he says.

It is misleading to see recent protectionist rhetoric as representing a shift away from free trade in its proper sense. Instead, an important element of it was a growing scepticism towards multilateral trade arrangements. Nevertheless, there is a significant possibility that the rhetoric could spin out of control, with damaging consequences for the world economy.