Are risk parity funds staying true to their name?

Risk parity funds – borne out of the idea that the main asset classes should have equal weighting according to their risk – have recently attracted the attention of investors. However, as these products have evolved to include a higher degree of manager discretion and increased leverage, many industry players are questioning whether some funds really deserve the risk parity label.

The concept of risk parity has its origins in modern portfolio theory, which was first developed by Prof Harry Markowitz in the 1950s. It came into its own at the height of the global financial crisis in 2008-09 when the traditional approaches to diversification faltered.

Proponents of risk parity argue that balanced exposures to equities, bonds and commodities can produce more consistent and better risk-adjusted returns over the long term because they would reduce the individual impact from each asset classes in varying market conditions. Typically, equities perform well in high-growth and low-inflation environments, while bonds excel in deflationary or recessionary backdrops, with commodities often performing best in inflationary times.

As with any investment strategy, risk parity has evolved over time. However, the divide is growing between the theory and the reality of the investment products on offer. “One of the issues today is that risk parity has become a buzzword,” says Torsten von Bartenwerffer, head of strategies and portfolio management at Aquila Capital. “Everyone wants to have their own spin. In many ways it is like hedge funds, which mean different things to different people. At one end of the spectrum, though, there are the multi-asset funds that may have renamed themselves risk parity and that does negate the intellectual concept.”

Edward Qian, chief investment officer at PanAgora Asset Management who coined the term risk parity in 2005, agrees that it has assumed multiple interpretations, but believes the most important thing is to ensure that the risk contributions from equity, inflation and interest-rate risks are balanced. “Some products, such as multi-asset-class funds, are not truly risk parity because they have a concentration to one asset class, typically equities. For example, high yield is equity risk in bond clothing.”

The level of manager discretion in making allocation decisions has also raised questions. In a prolonged low-interest-rate environment, it is generally accepted that fund managers should take a more proactive stance in an effort to generate returns. However, opinion is divided over just how much discretion they should have to change asset allocations. Some risk parity proponents contend that strategies are dynamic and that if volatility increases in the bond market, for example, then the model should be immediately switched into other asset classes. Others, meanwhile, prefer a lighter touch.

“Too much discretion is dangerous because massive shifts can lead people away from a risk parity approach,” says Qian. “If you cut interest-rate exposure too much, then it might become a 60/40 portfolio. Our approach is systematic with quantitative and fundamental analysis and we only take moderate tactical shifts.” 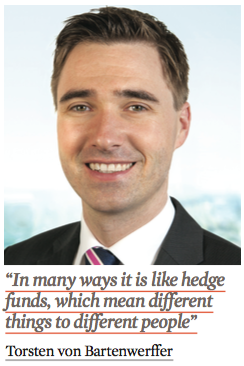 Michael Mendelson, principal at AQR Capital Management, also advocates modest adjustments. He says that while managers should adapt to changing market conditions, the risk allocation should remain similar across the different asset classes. “Strong views come at the expense of diversification and so the bar should be set pretty high before implementing.”

• Risk parity strategies balance the exposure to asset classes according to their risk weighting, leveraging lower-risk assets, like bonds.
• Some strategies have appropriated the term ‘risk parity’ for marketing purposes but there is a high degree of diversity of approaches and no single definition.
• Would it deviate too far if managers exercise too much discretion, for instance away from bonds?
• Or is it better to build a portfolio that is robust to macroeconomic shocks, even if that diverges from the commonly understood definition of risk parity?

Von Bartenwerffer contends that if managers go too far in having a discretionary override then it is not risk parity. However, he concedes that market conditions have forced them to be more adaptable. “In the past when interest rates were 5%, it was easier to run with the classic model. At the end of the day, risk parity is a simple strategy and the focus should be on diversification. This is perhaps why we are seeing a broader range of asset classes, such as credit instruments, than the traditional portfolios, which used commodities.”

Raghu Suryanarayanan, executive director of research at MSCI, however, is an advocate of greater intervention, and points out that one of the goals of risk parity is to build a portfolio that is not sensitive to economic shocks. “As the current macroeconomic environment is uncertain, more managers are using dynamic asset allocation to make tactical shifts,” he says. “I would call it risk parity 2.0. For example, our models indicate that a rise in interest rates could be negative for both equities and bonds if it is inflation-driven, but still favour equity markets and equity factor-based strategies over bonds.”

Another controversial topic is the use of leverage to increase the risk-and-return contribution of low volatility/low returning assets. AQR believes in modest leverage and Cliff Asness, AQR co-founder and chief investment officer, points out that “asset allocation must be balanced by risk, not by dollars”. He notes that there is no requirement for precise parity – which he dismisses as a marketing term – and that the aim should be to balance risk between asset classes.

However, leverage can be an issue for pension funds, which often have strict investment remits. The main concern over using leverage is that it magnifies profits when markets are doing well but increases losses when they are falling. Mirko Cardinale, head of asset allocation, EMEA, for Russell Investments, says: “Ultimately, the issue with risk parity is that, in order to build an effective balanced portfolio according to equal risk contributions and target a return level comparable to a traditional balanced fund, one needs to employ leverage. There is resistance to this at the retail and institutional level.”

Against this backdrop, Peter Willett, principal at Mercer Investment, urges investors to read the fine print. He acknowledges that it is difficult to compare strategies because managers like to be distinct. “Discretion is being used in most strategies to different degrees and investors should look at the capabilities of the manager when assessing a particular fund,” he says.