After a quieter summer for capital markets than in previous years, relieved risk assets remain popular. Economic growth, whether in developed markets (DM) or emerging markets (EM) has maintained a healthy pace with inflation yet to seriously surprise to the upside.

Even this year’s Jackson Hole conference for central bankers was less interesting than it has been previously. Participants preferred to talk about financial regulation and the importance of financial stability rather than giving away clues about their thinking on monetary policy or, indeed, on recent currency moves.

While worries about (the lack of) economic growth across the world may now be abating, there are numerous concerns regarding timings and details on how the world’s main central banks will extricate themselves from quantitative easing (QE) and normalise their respective monetary policies. The autumn meetings of the various central banks will undoubtedly garner even more market attention this year.

Stronger economic growth, coupled with buoyant business sentiment and consumer confidence, particularly in Europe, ought to make it easier for central banks to consider withdrawing the liquidity they have pumped in over past decade. However, the lack of inflation, not just in Europe or Japan, is both puzzling and concerning. Central bankers have reiterated their willingness to see through current inflation undershoots but they will not be ignoring them.

Geopolitics has not lost its capacity to unnerve and destabilise. The many facets of political uncertainty throughout the world – from increasing belligerence from North Korea to political chaos in Venezuela to Brexit and to debt ceiling debates in the US – are all sources of tension. Meanwhile, the devastation wreaked by hurricane Harvey, the floods in South Asia and the terrible droughts in East Africa are reminders of the far-reaching power of climatic events.

Over the summer, the UK’s financial regulator, the Financial Conduct Authority, announced that the LIBOR lending rate is to be phased out by 2021. Given the size of the market referenced to this key benchmark, estimated at about $350trn (€294trn), this plan caused substantial concern. A large proportion of the current stock of floating-rate debt and derivatives will have matured before that date. This will allow borrowers the opportunity to refinance maturing debt, possibly using a different floating benchmark. However, that still leaves a significant amount of debt facing potentially complex contract renegotiations.

Given the apparent lack of US inflationary pressures, and the continued absence of any significant fiscal package from the Trump administration, the summer’s gradual drift downwards in long US rates is not surprising. More tension is apparent at the shorter end as the debt limit is neared. Although Paul Ryan, the Republican Speaker of the House of Representatives, has been at pains to convey calm assurance that the lower chamber can and will pass the increase in the limit in time, the perhaps inevitable brinkmanship could cause instability.

The positive outlook on economic fundamentals lends solid support to corporate credit generally. In the US, earnings have also been good and the trend for tighter spreads is intact. While there has been disappointment at the lack of a pro-growth agenda from the administration, the political uncertainty might also be dampening mergers and acquisitions (M&A) activity, which may be seen as good for overall credit quality.

Emerging market (EM) fixed income also remains in a reasonably sweet spot, with easy financial conditions in developed markets, steady foreign exchange (FX) markets, robust EM growth and, importantly, economic stability in China. Issuers are taking advantage of the benign outlook, and 2017 could turn out to be a record-breaking one for supply for hard currency sovereign EM debt. EM debt, both hard currency and local, has shown reassuring resilience in the face of a variety of shocks, reflecting both the strong fundamentals as well as technical factors, in terms of investor positioning in EMs.

On a trade-weighted basis, the euro has appreciated by nearly 10% over the past six months. Although concerns about the euro potentially overshooting had been expressed in the July European Central Bank (ECB) meeting, the organisation’s president, Mario Draghi, did not mention euro strength in his Jackson Hole speech in August. FX markets interpreted this omission as acceptance of the strength and the euro moved higher against the dollar.

While a rising currency may increase downward pressure on Europe’s already low inflation, the appreciation at this point in the cycle is coming from a position of economic strength. It also coincides with a marked decline in political stresses within Europe and is, possibly, more justified in the ECB’s view. The currency is still below where it was when the bank first embarked upon quantitative easing operations in early 2014.

The diminished appeal of the dollar has been exacerbated by further macro disappointments in, for example, the payroll statistics, as well as ongoing weakness in inflation data. Politics, too, is taking its toll, with nervousness about the ability of Congress to pass necessary fiscal legislation in a calm and timely manner. Also, having been the front-runner, US economic growth is being eclipsed by many other economies across the globe.

During the summer, the Swiss currency has also had an interesting change in its trading pattern. July’s sharp fall in the Swiss franc against the euro was surprising, both for its magnitude and also the timing. It is still not clear what triggered the move; perhaps it was Swiss domestic investors deciding that now was a safe time to start rebuilding euro exposures in the face of renewed enthusiasm for the euro-zone. Alternatively, perhaps dovish comments from the Swiss National Bank Governor Thomas Jordan, who said there were no plans to change from negative interest rates, played a part too.

Trade renegotiations – what’s in it for Mexico?

After the election of US President Donald Trump, the currencies and stock markets of many emerging market (EM) countries declined markedly. Mexican assets were particularly badly hit and the peso touched all-time lows versus the dollar early in 2017 (see Mexican peso to the dollar). Investors priced in the possible realities of the new US president’s hostile campaign rhetoric, calculating that Mexico might have most to lose.

However, 10 months after the election, during which time Trump agreed not to terminate but instead renegotiate the 1994 North American Free Trade Agreement (NAFTA) treaty with Mexico and Canada, both the Mexican stockmarket and the peso have more than recovered their post-election losses. They have held steady even as the difficult talks have begun. 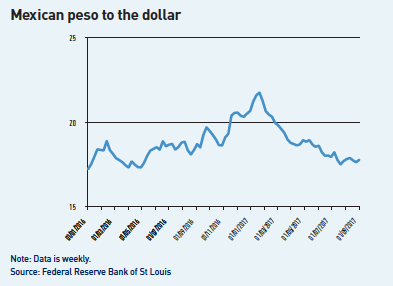 It is not clear how much change to the treaty will be agreed by the three nations. This is particularly the case, given that polls show that while US individuals tend to agree with Trump’s anti-NAFTA stance, businesses tend to be supportive of the treaty and of freer trade policies generally.

The US market is the most significant importer of nearly all categories of Mexico’s export goods, so any protectionist measures demanded by the US would damage Mexican trade. However, much of this downside risk is, arguably, already priced in to the peso. The initial rounds of NAFTA talks have so far not generated much by way of firebrand demands from any of the three protagonists.

Complacency around these negotiations – and the possibility that they could remain unfinished well into next year when the Mexican electorate chooses its next president – would be ill-advised, however. There are still plenty of uncertainties surrounding the treaty talks, and on Trump’s present stance on trade tariffs, whether on Mexico or on China, or generally.

Mexico will be hoping that the Trump administration can look beyond the notion that a US trade deficit with Mexico reflects a failed trade policy. The deep trade linkages between the two countries are symbiotic and exist to the advantage of both.