The new year will surely see the US Federal Reserve finally raise target rates. When it does, it will be for the first time in six years – which is nearly a record. The actual record  – a decade with no official rate moves – was set between 1937 and 1947 as the Fed battled to aid the struggling US economy to emerge from the Depression and, subsequently, from the huge costs incurred during and after the Second World War.

Other major central banks, however, are either keeping policy unchanged (and very loose) or easing further. With the People’s Bank of China (PBOC) taking the market by surprise with its recent rate cut, the BoJ announcing more quantitative easing, and the ECB clearly still in easing mode, how this extreme divergence of policy between the US and the rest plays out during 2015 will be important to all financial markets.

Perhaps one of the biggest ‘surprises’ for the global macro-economy in 2014 was the dramatic fall in energy prices, in particular of crude oil, which lost about a quarter of its value over the year. The loss was due to a combination of greater supply from new sources and of lower demand, with the global economy struggling to get going as China, Japan and Europe all posted weaker than forecast economic growth figures.

Less surprising was the announcement from OPEC in November that it had no plans to cut production. OPEC’s influence has diminished greatly over the past decade, largely reflecting the growth in supply from non-OPEC producers, such as the US, as well as the cyclically lower demand for oil.

Low or falling inflation will be an important theme this year, with inflation running below central bank targets throughout the developed world, as well as in China and the largest eastern European economies.

The fall in oil prices has added to those forces pushing inflation lower and although it should provide an economic boost to oil importers throughout the world, further declines will not help those already-embattled central banks.

The sluggishness of the US economic recovery has confounded expectations for several years, with employment trends perhaps one of the most puzzling aspects. In 2012, the Fed suggested that unemployment falling below 6.5% was the important level that might trigger a tightening of policy. Within months, however, the Fed was moving those particular goalposts and was instead considering a much lower unemployment figure to be a potential inflationary threat.

There are many factors influencing employment trends during this period. It seems that people who lost their jobs during the recession have taken significantly longer to find work than during any economic recovery since the Second World War. There has also been a significant decline in the quality of jobs offered and accepted, with a rising number of employees now on zero-hour contracts. Indeed, wage growth during this recovery has been very slow, so weak that it was one of the stated factors behind the Fed’s announcement that it was lowering its unemployment ‘threshold’. 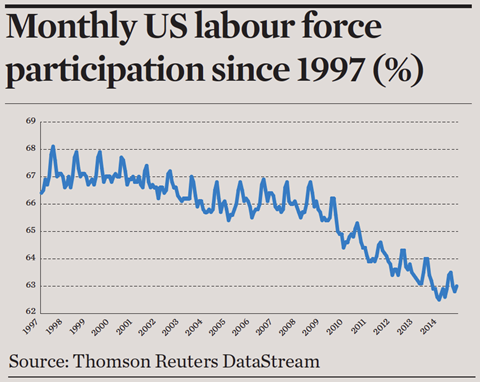 Labour force participation has fallen from 67.3% in March 2000 to 62.8% in October 2014. And the most rapid decline – an almost straight line – has been seen since the onset of the financial crisis and is yet to show signs of stabilising.

Some, including the Fed, argue that the fall is structural, and explained by demographics as America’s bulge of baby-boomers – those born between 1945 and around 1965 – grow up, retire and exit the workplace. Others suggest that US workers are choosing to drop out of the labour force, a trend which could be an unexpectedly negative factor for the future growth potential of the US economy should these people stay out of the workplace.

The year 2014 was surprising, if not baffling, for government bond markets. Twelve months ago, few forecasters were predicting that it would be a great year to own the US long bond, despite very little change in the market’s overall view, as the year progressed, on when the Fed would raise rates.

Risk-free rates, on both sides of the Atlantic, were sent lower by a combination of a very widely held view that rates would rise (justifying significant market short position in Treasuries), coupled with data releases frequently implying economic growth weakness, both domestic and global, as well as a rapidly declining oil price which, denominated in an appreciating US dollar, dragged down inflation expectations everywhere, including the US.

As 2015 begins, the US economy is undoubtedly stronger than it was 12 months ago and labour markets have clearly improved. However, although rates – especially longer-dated rates – are much lower than a year ago, so too are inflation expectations. The spectre of falling prices, already haunting Europe and Japan, could come to the US. Given the Fed’s dual mandate of full employment and 2% inflation, falling inflation expectations could have a big influence on the way the Fed reacts this year.

European investment-grade credit merits special mention for 2014, having returned about 8% over the year, well above even the most optimistic forecasts. European high-yield, on the other hand, suffered more during the periods of high market volatility, frequently not recovering lost ground as markets regained composure.

Although also aided by falling risk-free rates, US investment-grade credit had a trickier year, and widened versus Treasuries, reflecting the greater maturity of the economic cycle there. And with energy companies representing just under one fifth of the US high-yield index, the falling oil price has had a considerable negative impact.

The US dollar rallied against virtually every single currency in the world last year. If there was another common theme throughout FX markets in 2014, it was that the weakest currencies tended to be associated with economies whose inflation data continued to surprise on the downside.

The ECB’s 1.1% forecast for inflation in 2015 is looking less attainable as current euro-zone inflation data print ever lower, and this will reinforce the view that the ECB is behind the

curve. Although not the majority view, there is a growing conviction that the ECB will be forced to announce sovereign bond QE some time in 2015, as the downside risks of not doing it become too great.

President Draghi has so far managed to convey that the ECB is very aware of the dangers and is also ready to do more should that be required. However, time is running out as

inflation expectations have failed to rally. Although the euro has weakened markedly versus the US dollar, it is still hard to figure out what could turn it around.

There is a danger now that the euro could experience a severe sell-off if the ECB fails to persuade investors that the euro-zone economy is ready to turn, and we could witness a wholesale liquidation of euro assets by foreign investors.

Back in the 1990s, the yen’s precipitous decline was driven by huge

liquidation of yen-denominated assets by foreigners. That currency depreciation did nothing to help reflate the

Japanese economy, and no central bank would want to repeat that experience.