Although the world economy is moving towards normalisation, after the global financial crisis, it is still testing, and sometimes breaching, so-called normal bounds. For example, the US unemployment rate dipped below 4% in March, edging close to the all-time low of 2000. And the yield premium between dollar one-year and euro one-year bonds exceeded 3%, a historic high.

The April 2018 Financial Stability Report from the IMF highlighted risks “accumulated during years of extremely low rates and volatility”. Although sanguine about growth, the report points to the sensitivity of financial assets to any tightening in conditions.

It highlights several emerging market economies’ particular vulnerabilities. These include China where the risks from the “interconnectedness of the banking and shadow banking sectors” are still high. In less than a decade, China’s total debt has risen from 140% of its GDP to over 250%. Such debt accumulation has been associated with painful endings and crises. Given the large numbers associated with China’s economy, any shock could potentially create huge waves.

Risk markets, and in particular emerging markets, caved in under the pressure of rising short US rates and an escalation in trade tensions. The sharp appreciation of the dollar was another important factor.

Those many influences categorised as geopolitical continue to grow in number and variety including nuclear proliferation, Syria, Russia, trade wars, Brexit and Yemen. While euro-zone fears may have waned from the debt crisis, Italian politics might create some reminders of past tensions. Whatever the makeup of the new government, it will be populist and may announce some undoubtedly less than fiscally prudent plans. 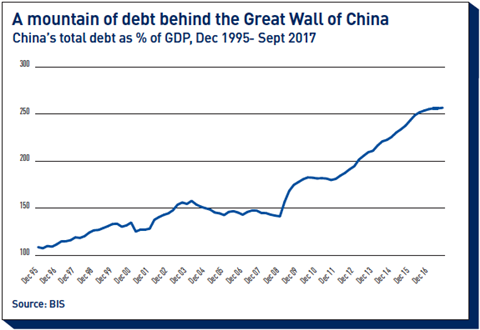 In the face of weakening economic data both the Bank of Japan and ECB are remaining cautious by keeping monetary policy loose. The US Federal Reserve, despite signs of economic weakness, also seems to be taking a wait-and-see attitude before it makes any decision about downgrading rate forecasts.

Adding to nervousness, the rapidity of the rise in (shorter) US rates has brought back memories of 2013’s taper tantrum. Short US rates have been moving quickly this time but several factors have enabled emerging economies to lengthen the maturity profiles of their issuance. These include recent economic growth and the improvement in their current accounts.

Although a rising oil price may benefit US high yield because of the preponderance of energy-related companies in the index, the outlook for US investment grade is a less clear. After a positive earnings season, the good news may be fully priced in. With mergers and acquisitions-related issuance in full swing, credit quality may be at risk.

For Europe’s investment grade debt, the economic outlook ought to be more credit friendly than in the US given positioning on the credit cycle. This is especially the case as the ECB is showing little sign of tightening monetary policy.

However, there are headwinds, not least from concerns that the recent lull in activity will turn out to be less temporary than hoped. The ECB’s Corporate Sector Purchase Programme will be coming to an end; indeed some suspect that the tapering has started. Also, while hedging the dollar has become expensive, the pick-up in yield offered across the Atlantic is 3%. This may be tempting for investors willing to take the foreign exchange risk.

The sharpness of the second quarter bounce in the dollar surprised many, and caught out a lot of short positions. For months, the dollar had appeared to ignore the interest rate differentials with other leading currencies. For the dollar bears its recent surge was a technically driven bounce coming from a standpoint of a sizeable net-short dollar position. It was not the start of the currency’s structural appreciation.

The theme of central bank divergence, with the US economy apparently pulling away from a flagging ‘rest of the world’, would support dollar rallies. Those observers more sustained bullish trend for the US currency point to the positive impact of the Trump administration’s tax reforms, supporting the trend for US corporates’ dollar repatriation.

They also herald signs, albeit early ones, that emerging market bond fund redemptions are picking up. This could signal the start of a larger capitulation, with nervy investors tempted by the lure of a 3% yield in dollars, and no volatile foreign exchange exposure to worry about.

Argentina’s request to the IMF for a credit line should be seen as a precautionary and positive move as it ought to mitigate the current crisis. With inflation at 25%, the currency getting close to free fall and interest rates hiked to 40%. A huge amount needs to be done to restore investor confidence in the peso.

Despite acknowledging Argentina’s poor fundamentals, and its high funding needs and twin deficits, the country’s escalating predicament comes at a time when investor confidence has already had a knock. Though many individual economies within the emerging market index have made improvements and the universe may well be better at avoiding contagion when it is only one country in crisis. That resolve will be sorely tested when the numbers in trouble start to mount.

Geopolitical, or non-economic, risks appear to be becoming more numerous and significant determinants for financial markets and investment decisions. Arguably, they are increasing as a culmination of trends set in place by globalisation and the slowness of conflict resolution. Add in to today’s mix the rise to power of populist world leaders and the steady-as-she-goes diplomacy rulebook is challenged.

Defining geopolitical risk as “the risk associated with wars, terrorist acts, and tensions between states that affect the normal and peaceful course of international relations”, the authors have constructed the index using an algorithm that counts the frequency of articles (in English) from a range of international newspapers. These include the Financial Times, New York Times and the Wall Street Journal.

Investors worldwide are already aware of the effects on economic confidence of increased geopolitical risk. The GPR index cannot give clues from where, or when the next geopolitical shock will come, nor by how much economic activity will be depressed or global capital flows diverted. The authors’ work confirms the notion that adverse effects are sparked by heightened threats as opposed to their realisation.

The latest readings of the GPR make for uncomfortable viewing.

Since 2001, the index has tended higher, particularly since 2010. The GPR Historical index, dating back to 1900 using fewer available sources, shows that today’s five-year moving average is at levels last seen at the end of the second world war, over 70 years ago.