Bond yields have been rising, which is not that surprising given that sharp sell-offs in government markets have been reasonably frequent in the multi-year bull-run. The rather more vigorous two-month episode in spring 2015 began in the Bund market, where yields burst sharply higher, taking many other developed bond markets with them. Since that sell off, Bunds yields have trended ever lower, passing through the zero level this summer.

The trigger this year was in the UK, where surprisingly strong GDP numbers spooked an already wary post-Brexit Gilt market. It is too early to fully explain the UK’s apparent economic strength. Perhaps the buoyancy of the stock market aided sentiment, although much of the strength in equities is directly linked to the weaker sterling, boosting offshore earnings.

More pessimistic observers argue that figures may have been boosted by consumers choosing to spend now rather than later, perhaps because of fears a weaker pound might result in markedly higher import prices and the return of inflation.

Across developed markets, inflation has steadfastly failed to materialise, despite the best efforts of central banks. Last year, tentative signs of an uptick in euro inflation were soon quashed by significant falls in the oil price.

Headline inflation figures are again on the rise across the world, largely reflecting base effects from last year’s very low oil price. Since the financial crisis, however, rises in headline inflation have not translated into the core, and a global disinflationary mentality has become entrenched.

However, inflation breakevens have also been moving significantly higher, particularly in the UK. Even in Europe, the 5Y5Y forward inflation swap has moved up by over 50bps since the summer – still well below the ECB target but clearly higher.

The question now is, if inflation does rise will it finally be less fleeting than in the recent past?

Almost any economic or political news from China has the capacity to influence global financial markets, but it is in commodities that China seems to have the most immediate and acute effects. The price of coal is a case in point. The price halved over 2014 and 2015, while during 2016 there has been a sustained and significant price recovery. Events in China can explain most of the moves. 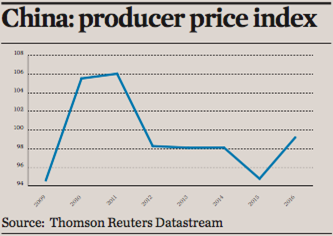 China is the world’s biggest coal producer and user. As China’s economic growth slowed significantly from 2012 onwards, the economy’s considerable appetite for coal, and many other commodities, shrank. Furthermore, Chinese domestic production of coal increased, which added to a global supply glut, so downward pressure on the coal price in particular was considerable.

At the end of 2015, following the Paris climate talks, China pledged to cut greenhouse gas emissions and improve air quality in its cities by significantly cutting its use of coal. It did this by curbing output from Chinese coal producers. This coincided with an increase in demand for coal from within China and the rest of the world, and the price rose accordingly.

In late 2015 and worried about the weak economy, China’s policymakers created a huge credit stimulus channelled into infrastructure and property investment. This translated into a significant boost to Chinese demand for all sorts of industrial metals, supporting prices here as well.

And so for the first time in over four years, Chinese producer prices have risen year-on-year (see figure). This will hopefully feed into upward pressure on CPI inflation and will come as something of a welcome relief to many highly indebted sectors within the economy such as the housing market, which has experienced a debt-fuelled surge in urban prices over the past 12-months.

While there will be volatility in future producer price index numbers, and China’s growing leverage is of genuine concern, the economy’s move to escape from that multi-year deflationary environment is significant.

Bonds
Not that long ago, it would have been unusual for the US Treasury market to be dramatically buffeted by bond market turmoil on the other side of the Atlantic. But there was little surprise when US Treasuries were also swept up in the recent Brexit-triggered sell off. However, neither this rise in bond yields nor a run of unexciting economic data have affected the consensus outlook that the Fed will raise rates in December, albeit dovishly with the Fed retaining its cautious outlook.

Rising inflation expectations have surely contributed to the rise in yields on both sides of the Atlantic, although real yields have not risen significantly, remaining negative in Europe, all of which implies that developed-market monetary policy remains accommodative. While there might be no respite for risk-free government bond markets – expensive on almost any measure – a reflating global economy with ample liquidity and plenty of spare capacity should provide a supportive backdrop for risk assets such as credit.

For Europe’s government bond markets politics remain a pressing concern. In addition to ongoing Brexit negotiations, the Italian referendum adds to the tension. Repeatedly through 2016, voters in the UK, the US and across Europe have voted to show their anger and disaffection with politicians.

But observers seem to be downplaying the ‘local’ difficulties the referendum’s result might cause, and are instead fretting much more about the ECB and the rumoured possibility of the bank planning to ‘taper’ its asset purchases. Given the frailty of many European banks, the lacklustre and disjointed euro-area economy and those tentative signs of slightly higher inflation, all are agreed that ECB will have to be exceptionally careful in its communications.

Currencies
The rising oil price helps the oil exporters, while the currencies of Russia, Norway and Columbia have outperformed the dollar over the past three months.

At the other end, higher oil has had a predictably detrimental effect on the currencies of oil-importing countries such as Japan and other emerging markets.

The dollar has been strong too, buoyed by the talk of reflation, the absence of monetary tightening in any other developed market, and the future possibility of the Fed raising rates more than once in a calendar year.

Sterling’s extremely weak performance is, of course, not oil-related. The UK currency’s effective exchange-rate index breached historical lows in October, just beyond levels reached after the 2008 financial crisis and those experienced in the months after the currency was ejected from the Exchange Rate Mechanism in 1992.

This large depreciation of the currency contributes to a significant easing in monetary conditions – as has the Bank of England rate cut. The increase in inflation expectations should translate into lower real interest rates.

Despite its steep decline, sterling’s lack of international appeal may persist. While it may be starting to appear ‘cheap’ on certain metrics, Brexit might force a huge structural change for the economy, which possibly renders exchange-rate modelling, likely based on past trends and data, somewhat redundant.