With the eight anniversary of the risk asset rally passing in March, many have taken the opportunity to compare the longevity of this bull run to previous ones. While valuations on equities or credit may, indeed, look stretched, there is little doubt that safe assets, despite recent sell-offs, are expensive. Equities remain cheap relative to bonds.

Although not the longest run in history, nor the steepest, what is unusual about this bull market has been the strong bond returns. Until recently these accompanied the rise in risk assets. Although there has been plenty of asset price inflation there has been little sign of rising prices in the real economy over the past eight years.

This is a legacy of central banks cutting rates to historical lows and engaging in huge quantitative easing programmes.

After numerous false starts over the years, the current economic recovery appears to be global and synchronised. The US economy is leading the way. Whereas non-US risk assets are less expensive than their US counterparts, European equities are on significantly lower multiples.

The US yield curve, repeatedly a reliable indicator of economic activity, has flattened. This is the result of a combination of higher short rates as the Federal Reserve, dovish or otherwise, raises policy rates and long yields decline as some of the Trump trade is unwound. After the White House’s failure to get its new healthcare bill approved, questions are being asked about the administration’s ability to push through other legislation. This includes President Donald Trump’s deregulation plans and proposed tax cuts.

The steep decline in US commercial and industrial lending since December 2016 is also worrying. It is the sort of fall which, in the past, often heralded an economic slowdown or recession. This time, however, some argue that it may have to do with the aftermath of the steep falls in energy and other commodity prices. Some struggling companies have turned to commercial banks for their credit in the face of seized-up capital markets. It may be too early to call but this data stream should be closely watched. 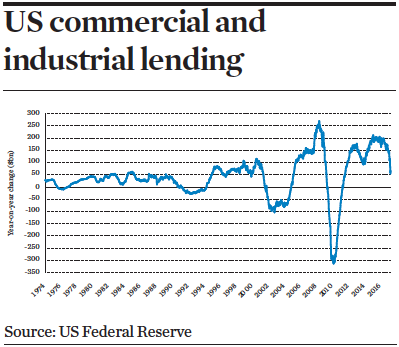 Convergence is a new theme for developed market (DM) government bond yields. The European Central Bank (ECB), Bank of Japan (BoJ) and Bank of England (BoE) will, eventually, each begin to normalise their respective monetary policies. In doing so, they will reduce the wide policy differences between them and the US Federal Reserve. These divergences have existed since the Fed started signaling it was getting ready to normalise policy back in the autumn of 2014. It has surely had some influence over the yield spreads between US Treasuries and other DM government bonds.

The reflationary environment should be supportive of both macro and corporate fundamentals across the world. So, despite the ongoing normalisation of monetary policies across the DM and the prospect of higher short rates at least, credit should continue to do well. That is, assuming risk-free rates can stay calm.

US credit has had a particularly strong post-election rally, enthusiastically joining in the big ‘Trump trade’. US tax cuts would clearly be advantageous to US companies. Some calculations imply that a lowering of the corporate tax rate from 35% to 20% could lead to a 25% reduction in leverage. This would be significantly beneficial to valuations in both investment grade and high yield.

There is unlikely to be any such fiscal boost to European credit. Instead, there is still a cloud of possible political trouble hanging over it.

Credit spreads across Europe are compressed. Although there may be little economic reason for them to widen materially, it is unclear what could push them lower.

There is, however, another tension within European credit. For the past year or so, spreads have not moved much, despite the ongoing ECB corporate bond purchases via its Corporate Sector Purchase Programme. When that purchasing comes to an end, could European bond markets trigger their own ‘taper tantrum’?

If there is lively debate as to whether risk assets will continue their mega rally, there seems to be rather more of a consensus that the dollar’s five-year bull run may be nearing its end.

Markets are awaiting more ‘hard’ (that is real economy) data to validate the optimism created by plentiful bullish ‘soft’ (that is sentiment and surveys) indicators. As more questions arise over the scope of Trump’s tax reform plans, it may be insufficient to convince investors to go even longer on the dollar.

Although since the start of the year the euro has strengthened against the dollar, it has not taken much to derail the European currency’s strength. Disruptions have included a slightly more dovish ECB and tricky polls before one of the many elections taking place across the region. For the yen, too, the BoJ has made it clear that, with frail economic data and inflation still well below target, substantial monetary accommodation is going to remain in place and that rates are staying low.

For many other currencies, and especially high-yielding ones, trading patterns versus the dollar have been different. The globally synchronised reflationary environment has benefitted emerging markets. Their economies have generally strengthened in the four years since the taper tantrum struck.

And the steadier economic outlook for China and its currency aids the benign environment for emerging Asia. Although, of course, the heterogeneity of emerging markets means that careful country selection is always necessary. In the absence of substantial policy changes from central banks in the DM the carry trade maintains its strong appeal.

Last year was an unusual one for commodities. For the first three quarters of the year, commodity prices rallied as the dollar index fell –  perhaps unsurprising, given the strong inverse relationship commodities have had with the currency over the past decade or so.  During the last few months of 2016, however, something changed and both commodities and the dollar rallied together.

From the early 1970s to the early 2000s, although it did swing between positive and negative, the average correlation between commodities and the dollar was low. The strength of various forces such as denomination, terms of trade, US domestic demand or petrodollar recycling, ebbed and flowed.

In early 2000, when commodities started to be traded more like financial assets, the correlation trended clearly into the negative. After the global financial crisis of 2007-08 the combined effects of extremely loose monetary policies and the huge QE programmes appear to have magnified the forces. Since 2008 there has been a strongly negative (that is inverse) price relationship between dollar and commodities.

It may be too early to interpret last quarter’s unusual trading pattern as the start of a new relationship. It could just have been a converging of coincidences. The nature of commodities trading is still evolving. Over the past decade, commodities have traded more closely to equities. The trend towards financialisation of the asset class may have further to run.

The importance of oil and energy within the commodity universe looks set to remain high. But the changing nature of oil and natural gas production and trends to more electric-powered vehicles could significantly alter the dynamics. So indeed could some of the more expansionary policies promised by the Trump administration.