Asset Allocation: Uncertainties on the rise

While rates markets remain focused on inflation and growth data, risk appetites appear more affected by the international politics of trade, led by the US. Although the consensus view is that a full-blown trade war will probably not materialise, participants will acknowledge there is too much for all to lose. This tail risk has the potential to be extremely damaging to all markets and is not one to ignore.

The benign Goldilocks theme of rising economic growth with little inflation throughout last year, may be on the ebb. Indeed, the global manufacturing Purchasing Managers’ index (PMI), although still safely over the 50 mark, could have already peaked for this cycle, led by weakness from within Europe most recently. And falling yields, both nominal and real, do seem to point to markets pricing in slower growth ahead.

Not that long ago investors seemed more concerned that signs of over-heating were emerging, stoking fears of a return of inflation, and not just from base effects owing to the oil price. While acknowledging that the particularly sharp run-up in risk assets over the last months of 2017 led many over-bought assets into expensive territory. The dramatic rise in volatility has whipped up uncertainties and clouded the outlook.

The surge in the gap between the London Interbank Offered Rate (LIBOR) and the Overnight Indexed Swap (OIS) has brought back memories of 2008, when it soared as the financial crisis took hold. Although the spread, viewed as a useful ‘barometer of distress in money markets’*, has risen markedly, it is less clear that it is indicating worrying dislocations in the money markets today.

Instead, it seems more likely owing to a combination of technical and temporary factors. These include a surge in short-term borrowing by the US Treasury soon after the debt-ceiling resolution, and changed tax legislation incentivising US corporates to bring home their offshore dollars. 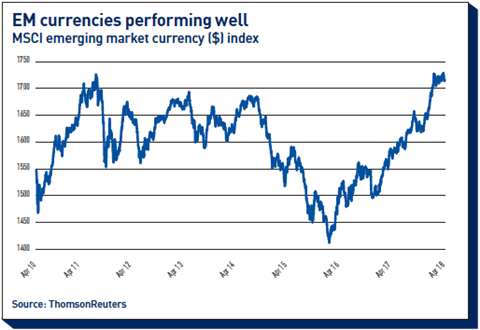 The LIBOR/OIS spread represents the premium that banks have to pay over the risk-free funding rate. However, given no significant rises in the average one-year credit default swap (CDS) of the LIBOR panel banks themselves, the health of these counterparties is unlikely to be today’s source of worry.

While agreeing that Federal Reserve balance sheet shrinkage might be equivalent to the tightening of a quarter point rate hike, investors have so far tended to take a more sanguine view of the run-off. The rise in the LIBOR/OIS spread, although explained by technical factors, has caused some to wonder if the unwinding of quantitative easing is already turning out to be more disruptive than previously assumed.

The Fed’s median dots show seven more quarter-point hikes, taking the Fed Funds rate to 3.4% by the end of 2020. Although this level for a ‘peak’ Fed rate is low in comparison with the rates in previous Fed tightenings over the past four or five decades, 3.4% would be 40bps higher than the Fed’s forecast of its long-run neutral policy rate, known at the ‘R star’.

Currently, the inflation-adjusted neutral policy rate, real R star, is somewhere between zero and 1%. If it stays around this level, then the Fed’s tightening plans will be more than sufficient to rein in any excesses, and may well tip the US economy into recession. However, not everyone agrees that the neutral rate will remain that low, arguing that US trend growth, perhaps boosted by tax cuts or by deregulation, could indeed spike higher. In which case, the Fed’s current dots will not be enough.

Investor positioning appears reasonably balanced within the foreign exchange (FX) market for now, although the dollar’s recent strength after struggling for so

many months despite increasingly supportive forward interest-rate differentials, may have taken some by surprise. The (trade) war of words has been loud, but FX markets seem for now to be listening but not yet acting.

Throughout 2017 and into the 2018, emerging market (EM) currencies, and Asian ones in particular, have performed well despite unfavourable trends in interest-rate differentials with respect to the dollar. Instead, EM FX were generally viewed as undervalued beneficiaries of the synchronised and healthy global growth picture.

In the absence of substantive macroeconomic changes, it may be the rapidity of the rising Treasury yields in January, in addition to the dawning possibility of a trade war, which dented confidence in the Asian currencies. That said, volatilities have remained low across EM FX, particularly when compared with stock markets over the same period.

Strong fundamentals and still-supportive growth differentials have shielded EM FX from the global headwinds. Having missed out on last year’s final-quarter rally by Asian FX, it might now be the turn for Latin American currencies to shine, keeping a very wary eye on international (trade) politics as well as the customary ups and downs of Latin America’s own domestic politics.

Some forecasters argue that this year’s dollar rally may have further to go, and that the US economy, boosted by additional fiscal stimulus, will outshine the now weakening growth outlook in Europe. Should trade arguments escalate, and damage the outlook for world economic growth, then the dollar might also benefit. Funding needs globally would be declining, limiting the liability flows out of the US.

Saudi Arabia’s recent inclusion in the FTSE Russell Global Equity index series as a secondary emerging market, will probably pave the way for MSCI-EM inclusion later this year. That is providing the Saudi authorities undertake the required equity market reforms.

Earlier this year, the Saudi Arabian government announced it would be borrowing in the international bond markets for the third year running. Its first international bond, successfully launched in 2016, raised $17.5bn (€14.2bn) and is the largest-ever EM bond sale.

Ambitious plans for reform and renewal have been instigated by Crown Prince Mohammed bin Salman over the past year or so. These plans acknowledge the changes the country must make to achieve a balanced budget by 2023. An additional goal is to reduce its heavy reliance on oil which accounts for over 60% of its budget revenue.

Although Saudi Arabia’s FX reserves have been falling as fiscal deficits have risen, today’s level of just under $500bn keeps it in the top five globally, and gives a clear indication that the kingdom remains a wealthy country. Unlike much of the rest of the world, Saudi Arabia managed to avoid recession throughout the financial crisis, and for a few years after the collapse in the oil price.

However, in 2017 the economy is estimated to have shrunk by about 0.5%, the first recession for almost 20 years. The dramatic fall in the oil price severely knocked the country’s finances, and although the oil price has since recovered and stabilised, revenues still lag expenditures, as the government steps in to reform, and support, the economy.

Unlike most of the rest of the EM universe, into which its stocks are soon to be entered, Saudi Arabia is a member of G20, and is also set to host the G20 meeting in 2020. The country will be particularly keen to show to its wealthy guests that its reforms are meaningful, its economy well-balanced, its workers happily employed and that foreign investment inflows will be warmly welcomed.